There is near unanimity in each of the countries surveyed that it is important for women to have the same rights as men. Nearly all people in Sweden, the Netherlands, France, Germany, Greece, Spain, the UK and Hungary hold this view. Even in the countries with the smallest share saying gender equality is important – Lithuania and Ukraine – roughly nine-in-ten (88%) believe this. 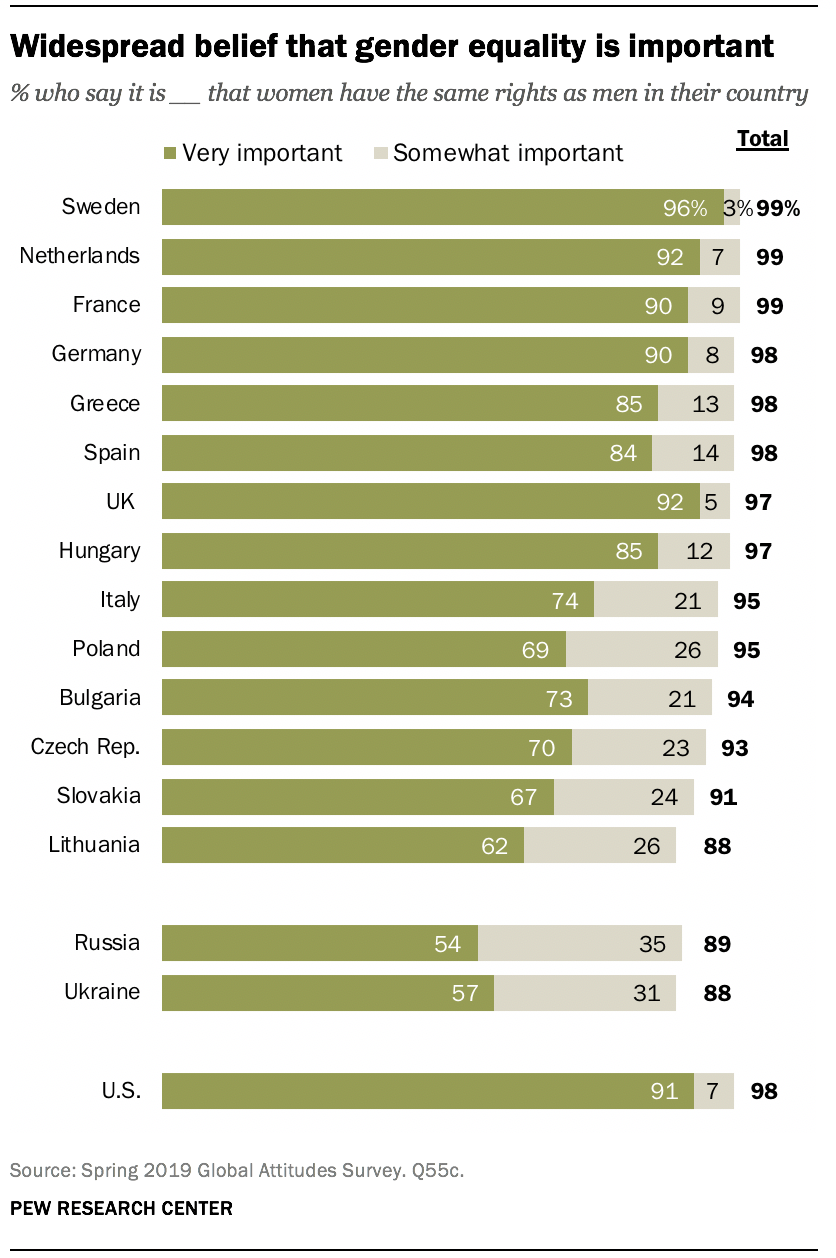 Although most publics think men and women having equal rights is important, the strength of this sentiment varies across the countries surveyed. At least nine-in-ten in Sweden, the Netherlands, the UK, France and Germany – as well as the U.S. – believe gender quality is very important.

By comparison, roughly seven-in-ten in Bulgaria, the Czech Republic, Poland and Slovakia say it is very important for women to have the same rights as men in their country.

The former Soviet nations of Lithuania, Ukraine and Russia are the least likely to believe gender equality is very important, though more than half in each country hold this view.

Gender equality since the fall of communism 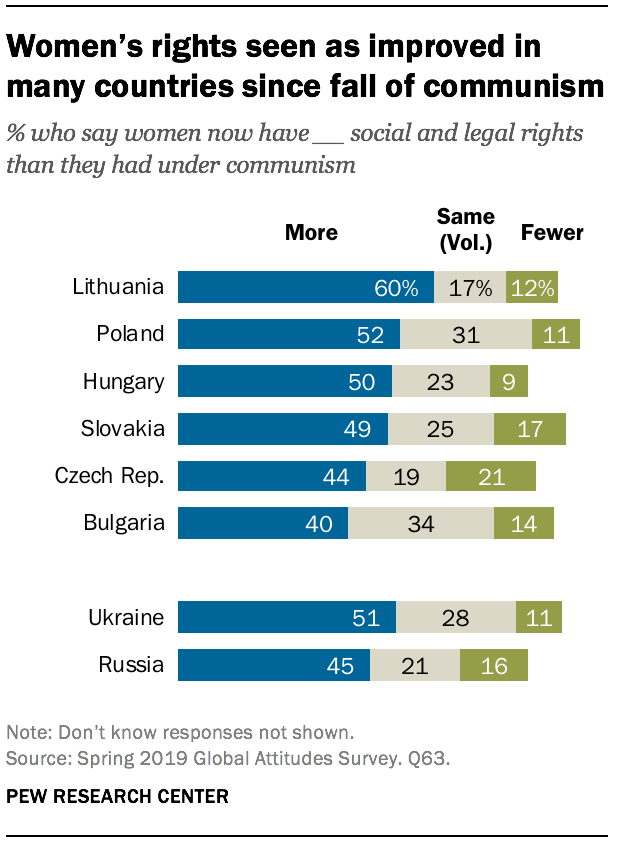 In former Eastern Bloc nations, at least four-in-ten in each country say women have more social and legal rights now than they had under communism. 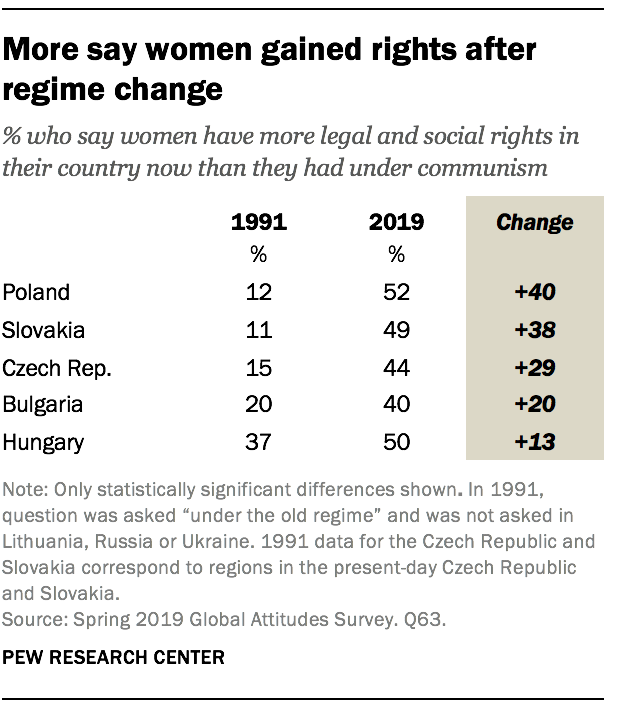 Yet, substantial minorities in several of the nations surveyed believe women’s rights remain unchanged, even though nearly 30 years have passed. Roughly a quarter or more in Hungary, Slovakia, Ukraine, Poland and Bulgaria believe women have the same rights now as they had under communism.

Since 1991, the share of people saying women’s rights have improved since the regime change has increased significantly in every country where trend data is available. However, few people saw any improvement in women’s social and legal rights immediately following the fall of communism. 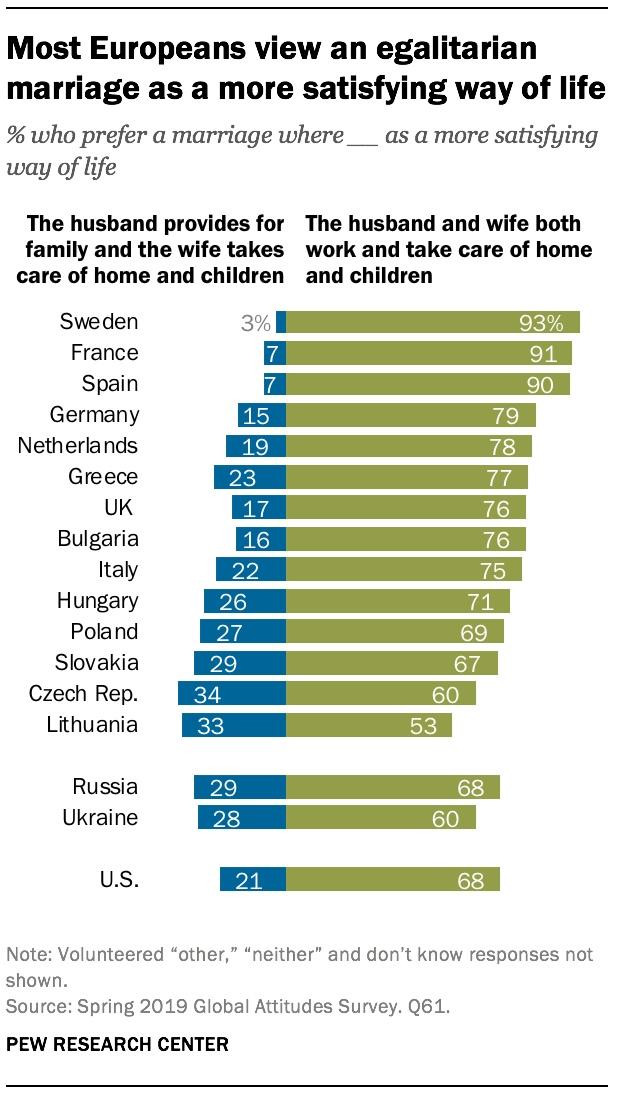 Publics in Sweden, France and Spain are the most likely to believe an egalitarian marriage is satisfying. And roughly eight-in-ten in Germany, the Netherlands and Greece share this preference.

Though preference for an egalitarian marriage is high in Central and Eastern Europe, roughly a quarter or more in Hungary, Poland, Slovakia, the Czech Republic and Lithuania believe a traditional marriage would be more satisfying. Roughly three-in-ten in Russia (29%) and Ukraine (28%) agree. 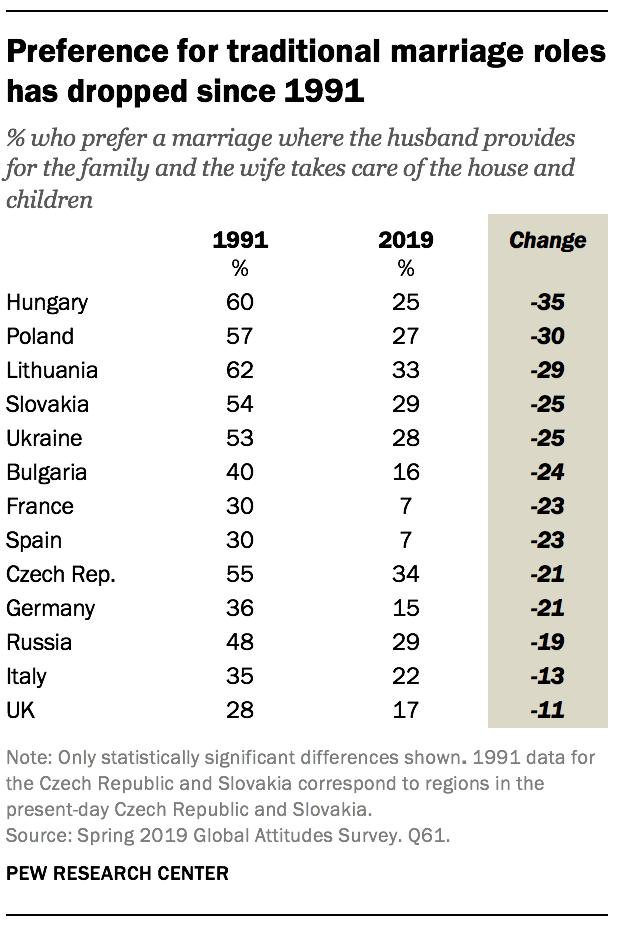 For example, six-in-ten in Hungary preferred a traditional marriage in 1991. This year, 25% hold the same view, a 35 percentage point drop. Similar patterns can be seen in Poland, Lithuania, Slovakia and Ukraine. 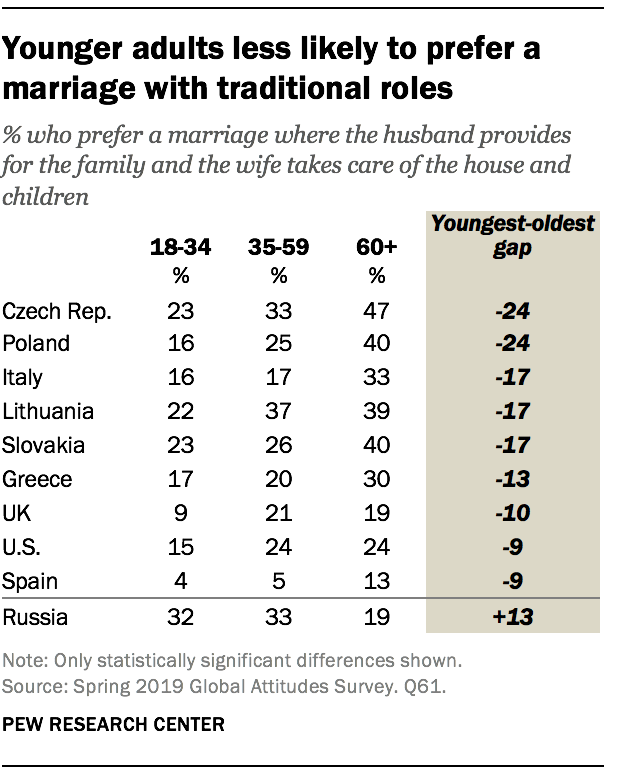 In most countries, adults ages 60 and older are more likely than those ages 18 to 34 to think a marriage in which the husband provides and the wife cares for the home and children is a satisfying way of life. For example, 47% of adults 60 and older in the Czech Republic prefer a marriage with more traditional gender roles, compared with only 23% of younger adults.

Russia is the only country where the opposite pattern emerges. Roughly a third (32%) of younger adults say a traditional marriage is a more satisfying way of life, compared with only 19% of older adults.

Education is also related to preferences for a traditional marriage in the Czech Republic, Greece, the Netherlands, Hungary, Lithuania, Italy, Poland, Slovakia, the UK, Bulgaria and Spain. People with lower educational attainment in these countries are significantly more likely than those with higher educational attainment to prefer a traditional marriage. 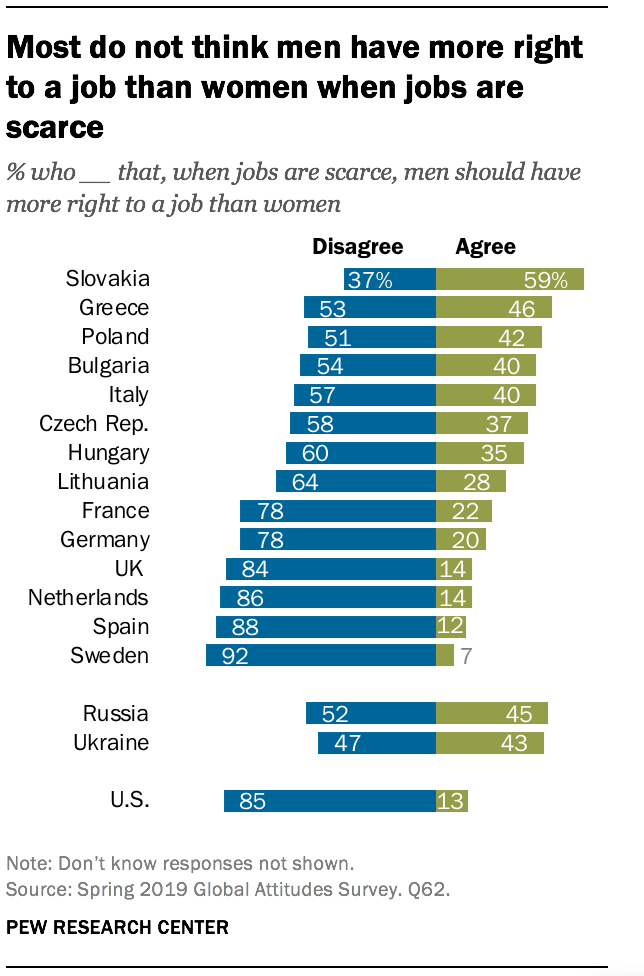 The view that men have more right to a job than women in tough economic times is a minority position in nearly all countries polled. Yet, notable shares of the public express the opinion in many Central and Eastern European countries, as well as Greece and Italy, where overall employment rates are relatively low.

Slovakia is the only country where a majority says men deserve preferential treatment when jobs are scarce. But four-in-ten or more share this view in Italy, Bulgaria, Poland, Ukraine, Russia and Greece.

By comparison, fewer than a quarter in most Western European countries, as well as the U.S., think men have more right to a job than women during economic hardship. In Sweden – the European Union’s most gender-egalitarian country, according to the European Institute for Gender Equality– only 7% say men should be given priority for jobs when jobs are scarce. 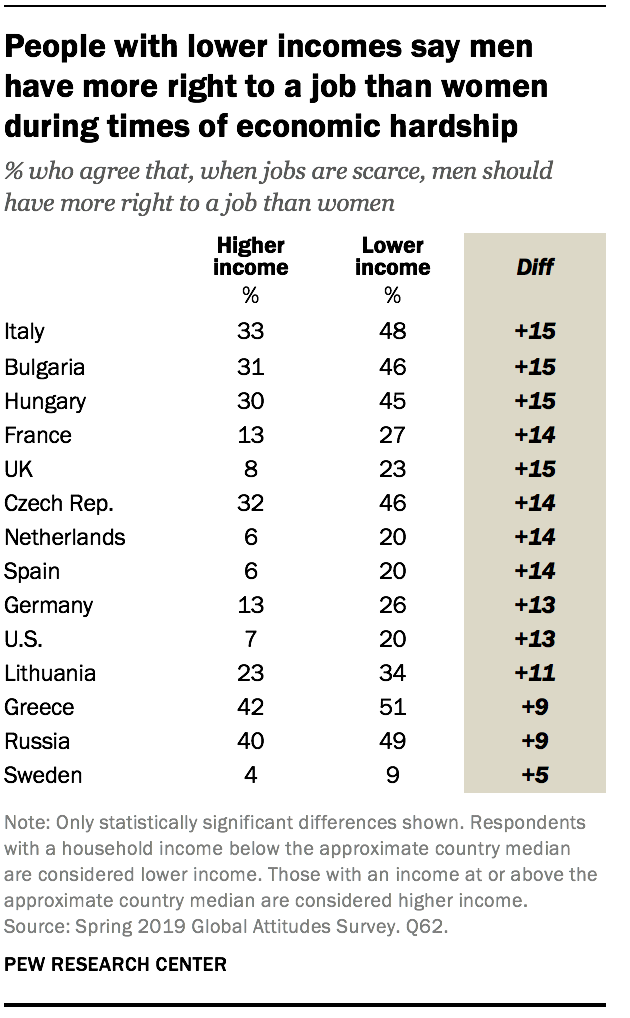 Those who earn a lower income – less than the median for their country – are more likely than those with higher incomes to believe men have more right to a job than women in nearly every country surveyed. For example, roughly half (48%) of Italians with a lower income think men should receive preferential treatment when jobs are scarce, compared with one-third of Italians who make an income higher than the national median. Similar income differences can be found in the U.S., as well as other countries across Europe: Bulgaria, Hungary, the UK, the Czech Republic, France, the Netherlands, Spain and Germany.

A similar educational difference can be found in all countries except Sweden and Lithuania. Compared with people with more education, those with less education are more likely to agree that men have more right to a job than women when jobs are scarce.

The largest educational differences on this issue – more than 20 percentage points – are in Greece, Italy, the Czech Republic and Bulgaria. Roughly half of Greeks with less education (51%) think men should be given preferential treatment for jobs during tough economic times. Only around a quarter of Greeks with more education (24%) share this opinion.

Overall, men and women tend to have similar opinions about gender equality in their society, but some gender differences emerge. 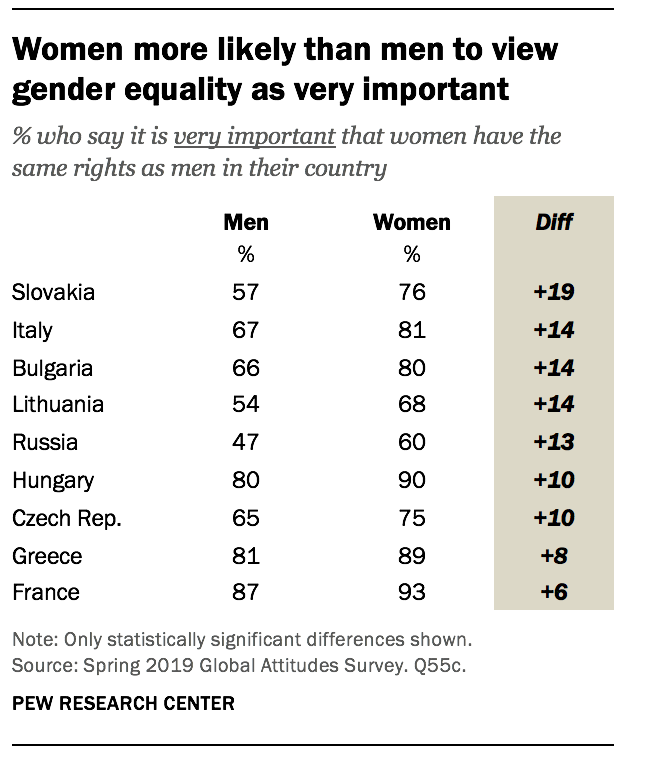 In most of the Central and Eastern European countries surveyed, women are more likely than men to say that it is very important for women to have equal rights in their country. The largest gender difference is found in Slovakia, where roughly three-quarters (76%) of women view gender equality as very important, compared with 57% of men. The U.S. public follows a different pattern; men are slightly more likely than women to think it is very important for women to have the same rights as men (93% vs. 89%).

Notably, men and women generally agree on their preference for a marriage where both the husband and wife work and take care of the house and children. There are only a few countries, mostly in Western Europe, where women show a greater preference than men for an egalitarian marriage. For example, 82% of women in the Netherlands think an egalitarian marriage is the more satisfying way of life, compared with 74% of Dutch men. Similar differences can also be found in France (94% of women vs. 88% of men) and Germany (82% vs. 77%).

Men and women also tend to be similarly opposed to giving men preferential treatment in employment when jobs are scarce. Men are more likely than women to think men have more right to a job in only five countries: Bulgaria, Italy, Slovakia, the Czech Republic and Lithuania.