There is a wide divergence across Europe in attitudes toward Muslims. Generally, more favorable views of Muslims exist in Western Europe, Russia and Ukraine while more negative attitudes persist in Southern, Central and Eastern Europe.

Solid majorities of people in the United Kingdom, France, the Netherlands, Germany and Sweden have positive opinions of Muslims in their country. And attitudes toward Bulgarian Muslims, who constitute around 12% to 14% of the country’s population, are also favorable. (In Bulgaria, the question specifically asked about “Bulgarian Muslims.”)

However, majorities in Slovakia, Poland, the Czech Republic, Hungary, Lithuania, Greece and Italy have unfavorable views of Muslims.

Meanwhile, views in Russia and Ukraine are mostly positive, and similar to attitudes in Western and Northern Europe. 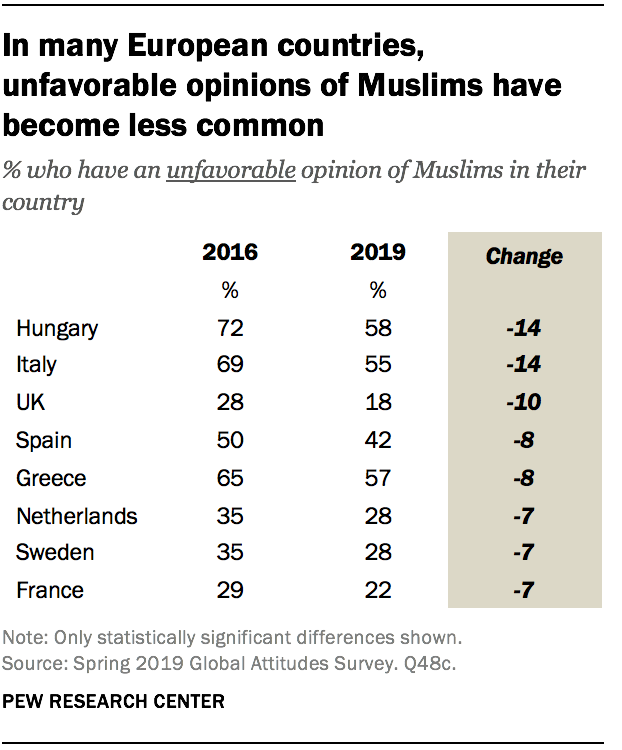 Despite these negative views of Muslims in Eastern and Southern Europe, unfavorable opinions have actually decreased in a number of nations since the question was asked in 2016, when millions of refugees from the Middle East and North Africa poured onto the continent. For example, in Hungary, where the current government has issued strict immigration controls, unfavorable views of Muslims have actually declined 14 percentage points since 2016. The same is true in Italy, where the anti-immigrant Lega party was part of a governing coalition during the period when this survey was fielded.

Despite the decline in negative sentiments toward Muslims, there are still sharp divides across the continent on favorability of the religious minority depending on support for populist parties.

In Sweden, for example, those with a favorable view of the Sweden Democrats, a party that opposed increased multiculturalism and especially immigration, are 42 percentage points more likely to have an unfavorable opinion of Muslims than those with a negative view of the Sweden Democrats. And supporters of AfD in Germany are 41 points more likely to have an unfavorable view of Muslims than nonsupporters. Similar divisions apply to supporters and nonsupporters of the Freedom and Direct Democracy party (SPD) in the Czech Republic, PVV and FvD in the Netherlands, National Rally in France, Lega in Italy, Vox in Spain, UKIP in the UK and the ruling Fidesz in Hungary.

On the other hand, those who support more left-leaning populist parties in France (Insoumise), Greece (Syriza) and Spain (Podemos) are more favorable toward Muslims. The only centrist populist party tested whose supporters show less positive attitudes toward Muslims than its detractors is ANO 2011 in the Czech Republic. 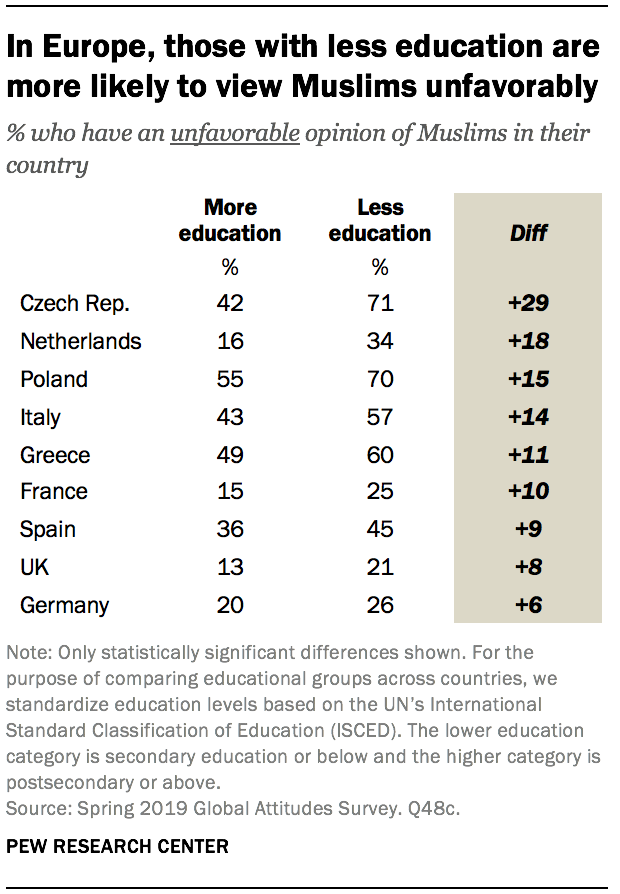 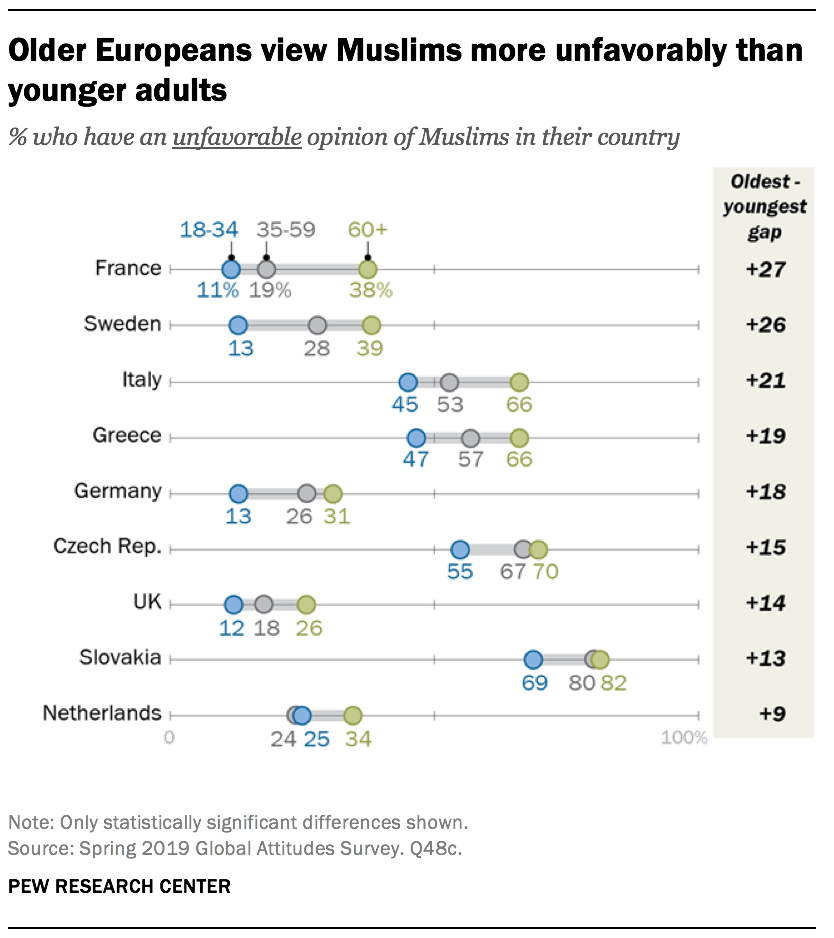 In Western Europe especially, negative attitudes toward Muslims are much more common among older people. In Sweden and France, people ages 60 and older are over 25 percentage points more likely to have an unfavorable opinion of Muslims than those ages 18 to 34. This pattern is also evident in Italy, Greece, Germany, the Czech Republic, Slovakia, the UK and the Netherlands. But there are few differences by age in most of the surveyed countries that lie in the eastern half of the continent.

Across the European countries surveyed, half or more express favorable views of Jews in their country. This includes roughly nine-in-ten or more in the Western European nations of the Netherlands (92%), Sweden (92%), the UK (90%) and France (89%).

Among the countries surveyed, only in Greece do more than a third have an unfavorable opinion of Jews in their country, where 38% say this.

In Ukraine and Russia, at least three-quarters of the population has a favorable view of Jews in their country – increases of 15 and 16 percentage points since 2009, respectively.

Many in Europe view Roma unfavorably

Of the minority groups tested on the survey, Roma stand out for the negative sentiments expressed toward them. In 10 of the 16 countries polled, half or more have an unfavorable view of Roma. The strongest such anti-Roma sentiment is in Italy, where roughly eight-in-ten (83%) say they have unfavorable views of Roma.

Positive attitudes toward Roma are more common in northern Europe. Around two-thirds in Sweden and the Netherlands have a favorable view of the group, as do around six-in-ten in the UK and Spain.

In many nations, ratings for Roma have actually improved from when this question was last asked in 2016. For example, in 2016, only a third of French people had a positive view of Roma vs. 50% who do now. Double-digit increases in favorability have also occurred in the UK (+14 points), Sweden (+13), the Netherlands (+13) and Spain (+12).

In general, those with more education and who are left-leaning in ideology tend to have more favorable opinions of Roma than those with less education or who are more right-leaning ideologically.

In addition, those who express favorable views of right-wing populist parties in Sweden, Germany, the Czech Republic, France and Italy are significantly more likely to have a negative view of Roma than those who have unfavorable views of these parties. For example, in Germany, supporters of AfD are 19 percentage points more likely to have a negative opinion of Roma than are those who do not support AfD. 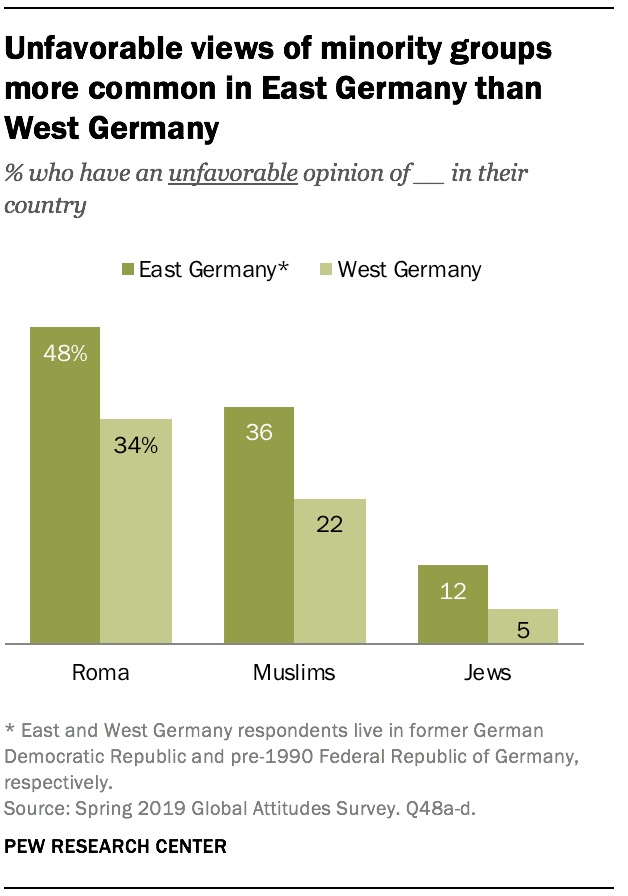 On many of these questions, there are sharp divides between those living in former West Germany and those in the former East. For instance, on views of Roma, those in the East are 14 percentage points more likely to have an unfavorable opinion of the minority group than are those in the West. And on views of Muslims, more than a third in the East (36%) say they have an unfavorable view of Muslims in their country, compared with 22% who say this in the West.

Views of Jews are more closely aligned, with few in either the West or East saying they have an unfavorable opinion of Jews in their country.

Acceptance of homosexuality is common in Western Europe, but more divided elsewhere 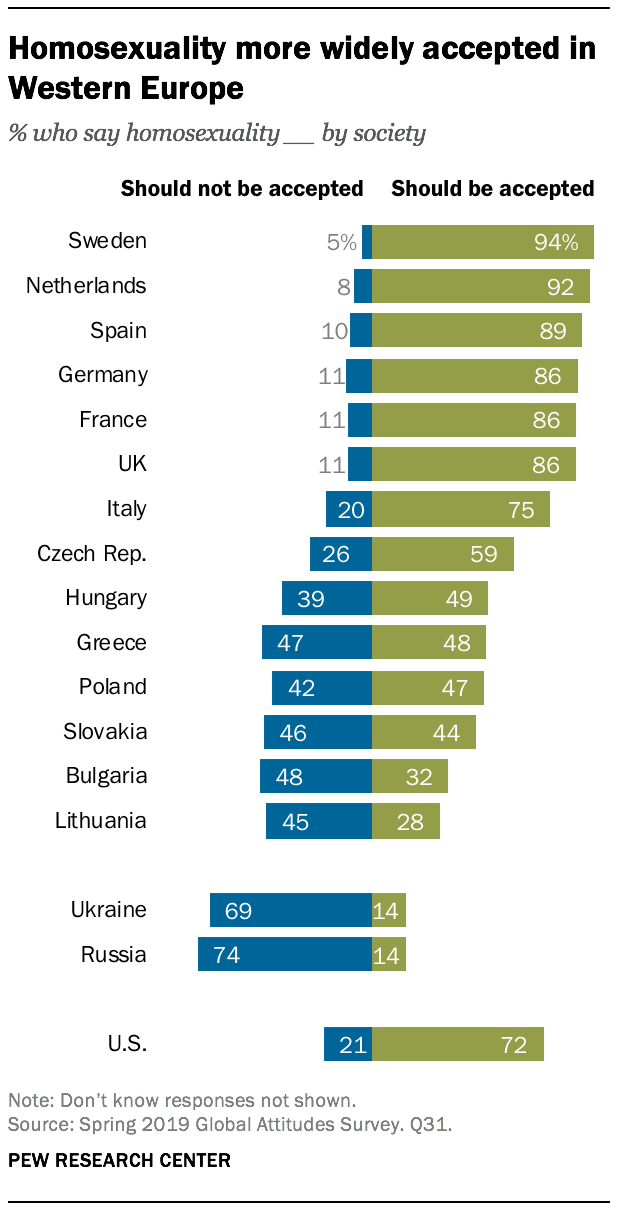 Sentiment is more mixed in many of the Central and Eastern European countries surveyed, with the Czech Republic and Hungary on balance accepting of homosexuality and Bulgaria and Lithuania not accepting.

In the U.S., about seven-in-ten say homosexuality should be accepted by society.

One of the sharpest demographic divides on this question has to do with religiosity. In 14 of the European countries surveyed, those who say religion is very or somewhat important in their lives are less likely to say homosexuality should be accepted by society. This extends to the U.S. as well. 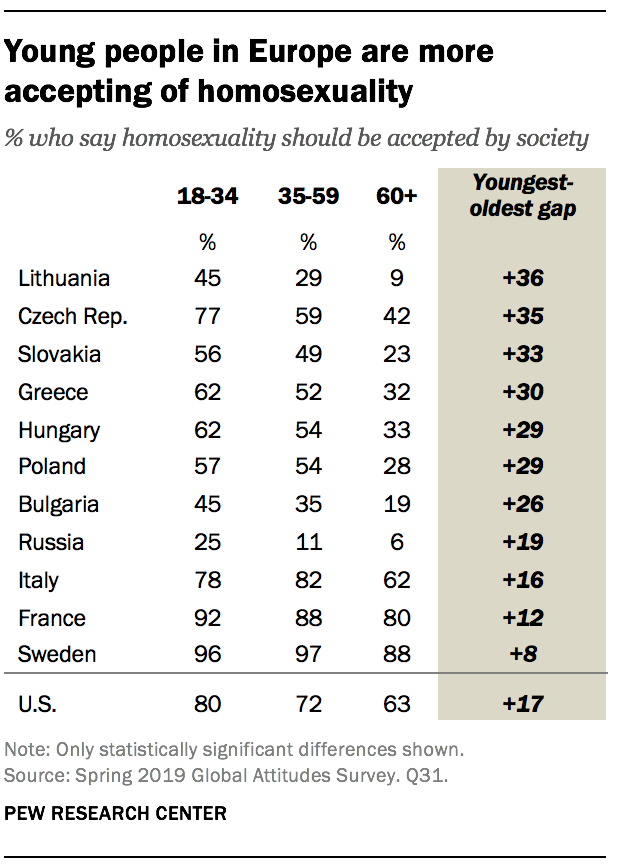 And in 12 of the surveyed countries, including the U.S., those ages 18 to 34 are far more accepting of homosexuality than those 60 and older. These differences are especially acute in Central and Eastern Europe. In Lithuania, for example, 18- to 34-year-olds are 36 percentage points more likely to say that homosexuality should be accepted by society than are those ages 60 and older.

There is also a political divide when it comes to views of homosexuality. In Poland, the Czech Republic, the UK, Sweden, Spain, Germany and France, those who support right-wing populist parties are more likely to say homosexuality should not be societally accepted than are those who do not support such parties.

For example, in Poland, supporters of Law and Justice (PiS) are 21 percentage points more likely to say homosexuality should not be accepted by society than are those who do not support PiS. And in Germany and France, supporters of National Rally and AfD, respectively, are about three times more likely than nonsupporters to say they do not accept homosexuality. But, even among these right-wing populist supporters in Western Europe, majorities still support the acceptance of homosexuality in society.