Across the six Central and Eastern European countries surveyed, satisfaction is somewhat higher. But this varies from a high in Poland, where about two-thirds are satisfied, to a low of 27% in Bulgaria. Relatively few Ukrainians (34%) or Russians (30%) are satisfied.

Democratic satisfaction has increased across Central and Eastern Europe 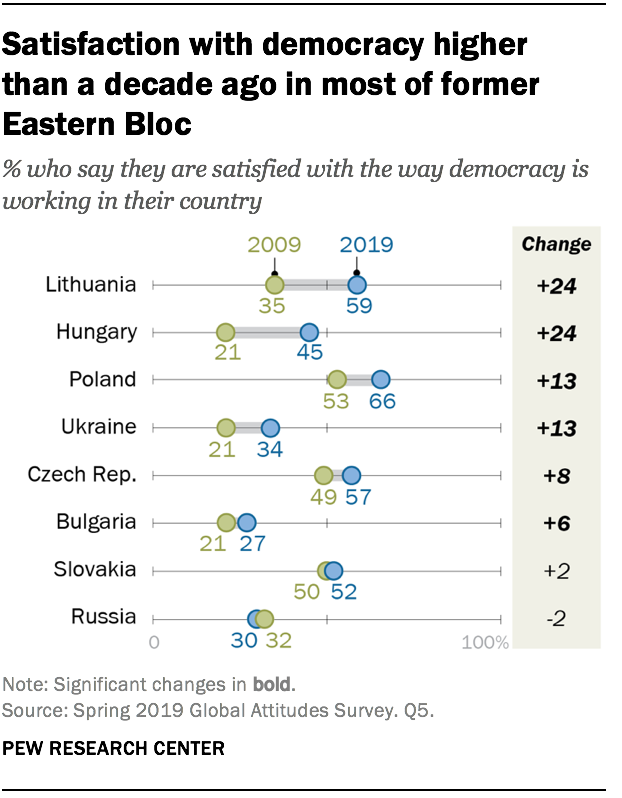 Across most of Central and Eastern Europe, satisfaction with democracy is significantly higher than a decade ago. Changes are most pronounced in Lithuania, where around six-in-ten are satisfied with democracy today, up from about a third (35%) in 2009. Similarly, in Hungary, more than twice as many are satisfied with democracy now (45%) than reported so a decade ago (21%). Satisfaction also increased over this time in Poland and Ukraine (+13 percentage points), the Czech Republic (+8 points) and Bulgaria (+6 points).

Elsewhere, even since last year, there have been some marked shifts in democratic satisfaction. For example, in Greece, although satisfaction remains relatively low overall (26%), it increased 9 percentage points since last year. In Spain, which had an election in April of this year, satisfaction with democracy has increased 12 points. 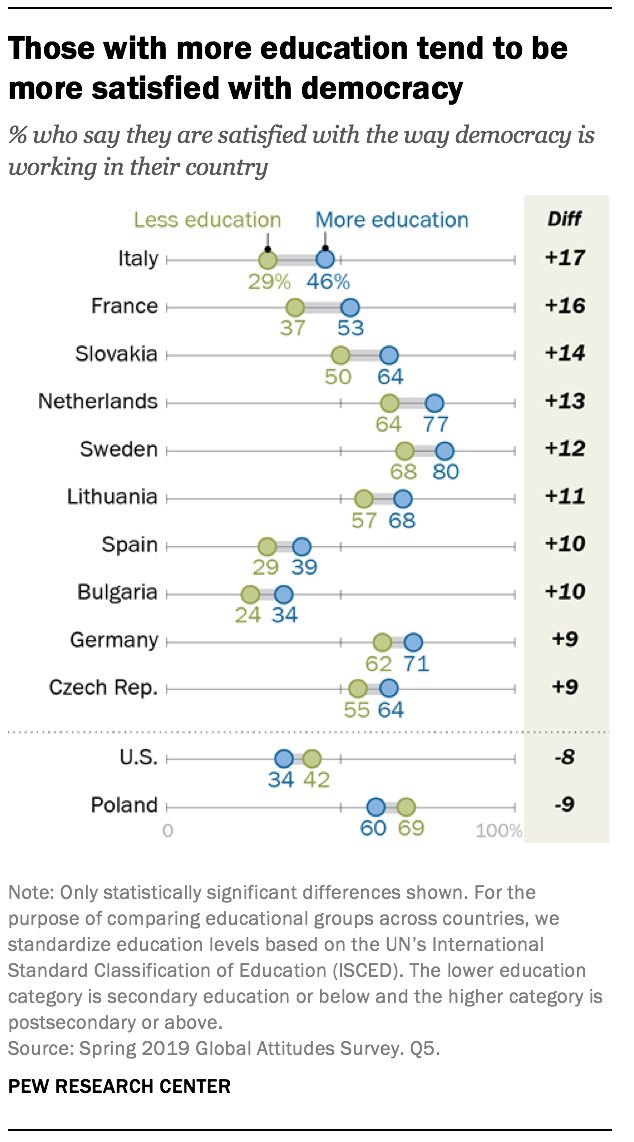 The United States and Poland stand out, though, for being the only countries surveyed where this pattern reverses. In the U.S., 42% of those with lower levels of education are satisfied with democracy, compared with 34% of those with higher levels.

Few think elected officials care about people like them 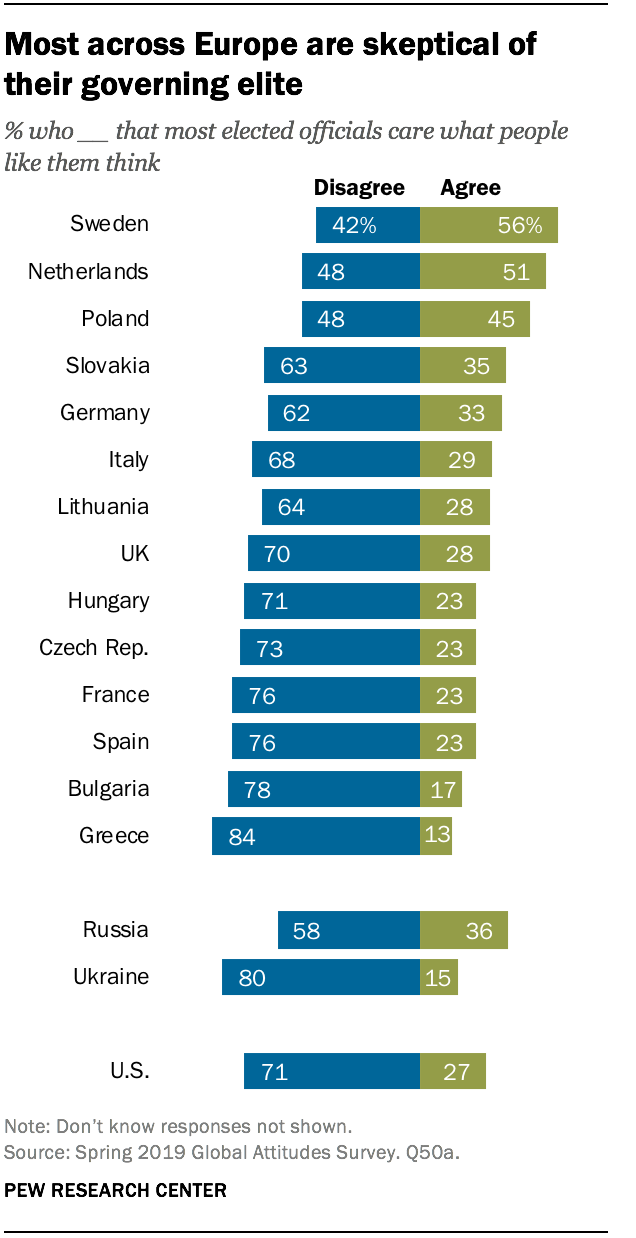 One factor that corresponds with democratic dissatisfaction and unites most EU nations – as well as the U.S., Russia and Ukraine – is a shared sense that elected officials do not care about their constituents. Only in Sweden does a majority say elected officials care what people like them think. The Dutch and Polish publics are roughly split on this question, but elsewhere majorities do not believe politicians care what they think. Greeks are the most negative when it comes to evaluations of their politicians: Only 13% say elected officials in their country care about people like them.

People with favorable views of six right-wing populist parties (Lega in Italy, PiS and Kukiz’15 in Poland, SNS in Slovakia, and Jobbik and Fidesz in Hungary) are more likely to agree that elected officials care what people like them think. For example, people with a favorable view of Fidesz in Hungary are more likely to say elected officials care (36%) than those who dislike the party (13%). But, among those with favorable opinions of the PVV and FvD in the Netherlands and the Sweden Democrats in Sweden, the opposite is true.

In post-communist countries, Poles, Russians and Slovaks have become more likely to say elected officials care about people like them since 1991. For example, 45% of Poles hold this view today, compared with 24% in 1991. In contrast, Czechs, Hungarians and Ukrainians are less likely now than in 1991 to see their politicians as caring about the ordinary person.

Europeans disagree about whether states are run for everyone’s benefit

While relatively united in their skepticism of elected officials, publics across Europe diverge in their assessments of whether the state is run for the benefit of all the people in the country. Generally, Central and Eastern Europeans stand out as more likely to agree than Western Europeans.

But, within each region, there is substantial variation. For example, across Central and Eastern Europe, agreement ranges from a high of 88% in Slovakia to a low of 24% in Bulgaria. And, in Western Europe, northern countries tend to be relatively more sanguine – Sweden (73%) and the Netherlands (70%) in particular – and southern European countries more negative. The sense that the state benefits everyone is particularly low in Greece (19%) and Italy (30%). Similarly, in Ukraine (21%) and Russia (38%), only minorities agree that the state benefits everyone.

To the degree that opinions have shifted, many increasingly see benefits flowing to everyone. For example, in Hungary, whereas only around a third (34%) thought the state was run for the benefit of all in 1991, today, roughly three-quarters (74%) express this view. Change has also been positive and pronounced in Poland (+25 percentage points), the Czech Republic (+18 points) and Slovakia (+17 points). In Russia, agreement is up 11 percentage points. In Lithuania, while opinion is unchanged since 1991, it nonetheless is up markedly since a relative low point in 2009. Among Central and Eastern Europeans, only Bulgarians are significantly less likely to agree that the state is run for the benefit of all now than in 1991 (-31 points).

In Western Europe, opinion is more mixed. In Spain and the UK, fewer agree the state is run for the benefit of all now than in 1991. Germans and Italians, in contrast, are now more likely to agree.

With regard to right-wing populist sympathies, supporters are split. Those with favorable views of five right-wing populist parties – UKIP in the UK, PiS and Kukiz’15 in Poland, SNS in Slovakia and Fidesz in Hungary – are more likely to say the state is run for the benefit of all. For supporters of AfD in Germany, PVV and FvD in the Netherlands, Sweden Democrats in Sweden, and SPD in the Czech Republic, this pattern reverses.

Most see value to voting 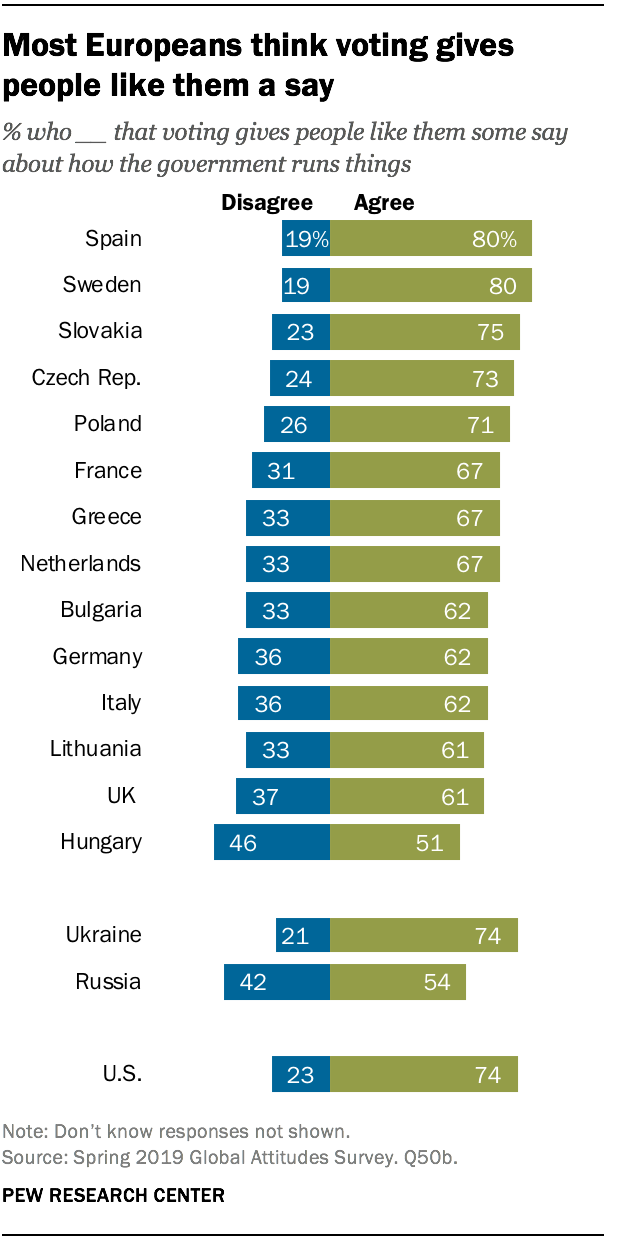 Despite mixed assessments about whether government is run for the benefit of all citizens, in every country surveyed, most people agree voting gives people like them some say in how the government runs things. A median of two-thirds in Europe generally think voting gives them a voice in their country’s politics, though levels of agreement range from a low of 51% in Hungary to a high of 80% in Spain and Sweden.

Across Western Europe, only the French are less likely to agree now that voting gives people like them a say than said the same in 1991, though most shifts in opinion have been relatively modest. For example, in Germany, whereas 54% agreed that voting gave them a say in 1991, today that number has climbed 8 percentage points to 62%.

Across most of the countries polled, people with higher levels of education are more likely to agree that voting allows them a say in their countries.

Next: 4. The European Union
← Prev Page
Page3You are reading page4Page5Page6Page7Page8Page9Page10Page11Page12Page13
Next Page →