Across Europe, there is relative agreement about which political institutions and rights are most important to have. When presented with nine different factors that people may or may not see as important to their country, majorities in every country polled – in most cases, large majorities – say each one of the nine factors is at least somewhat important. 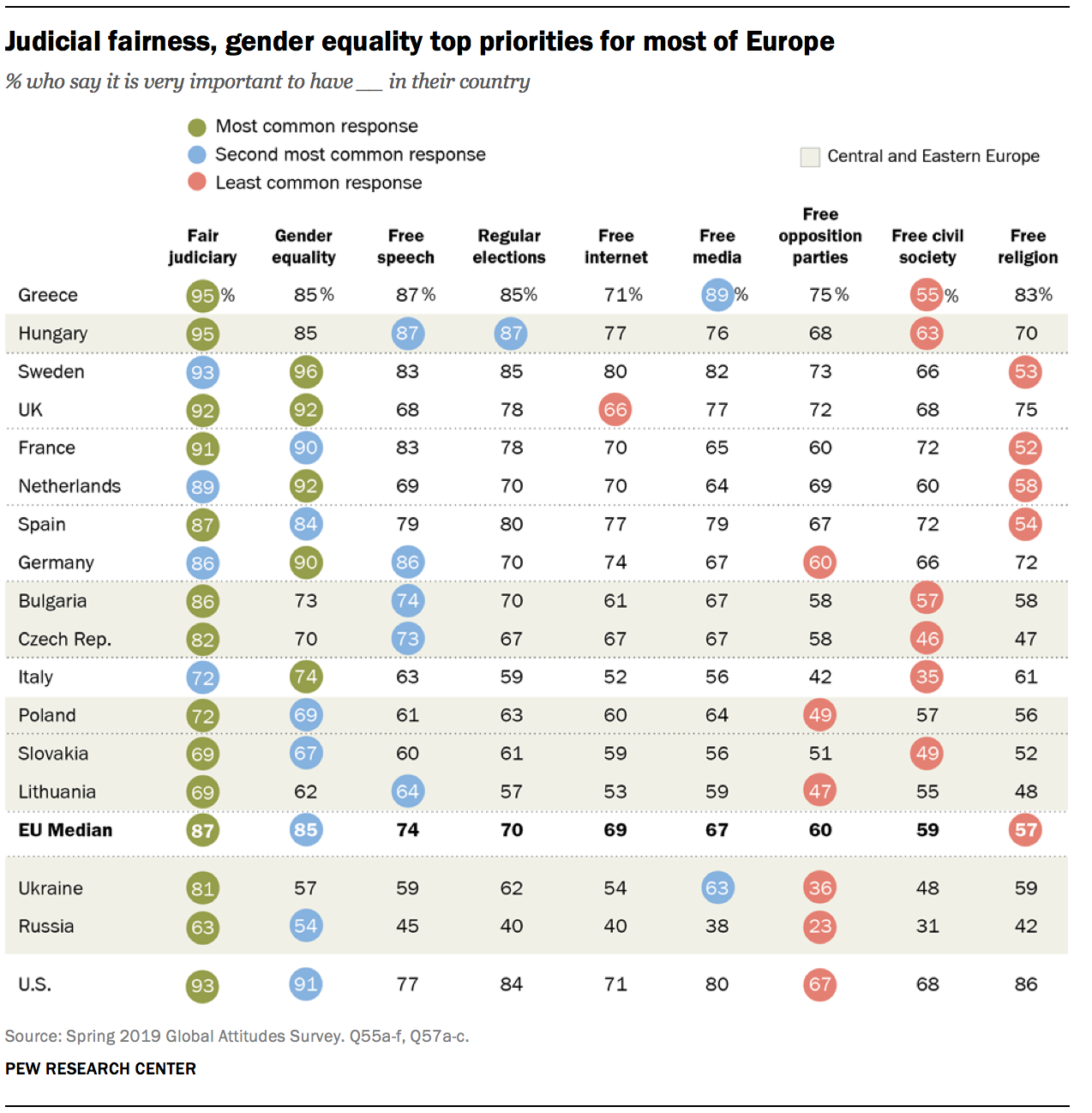 When it comes to what people deem to be very important, though, certain factors stand out. Across every country surveyed, having a judicial system that treats everyone equally is always named as one of the two most important facets. In most countries, women having the same rights as men is also one of the top two things people consider “very important” for their country to have.

But, while the relative ranking of the preferred factors varies little across the European continent, Western Europeans generally are more likely to see each factor as very important for their country than are Central and Eastern Europeans. And, by and large, Americans stand out for the relative import they place on most of these elements of democracy – even compared with Western Europeans. Russians stand out in the opposite direction, often being the least likely of all countries surveyed to say each factor is very important for their country.

Generally, people with higher levels of education are more likely than those with less education to say almost all of these factors are very important for their country. In contrast, younger and older people largely agree on the relative importance of most of these elements, as do men and women. 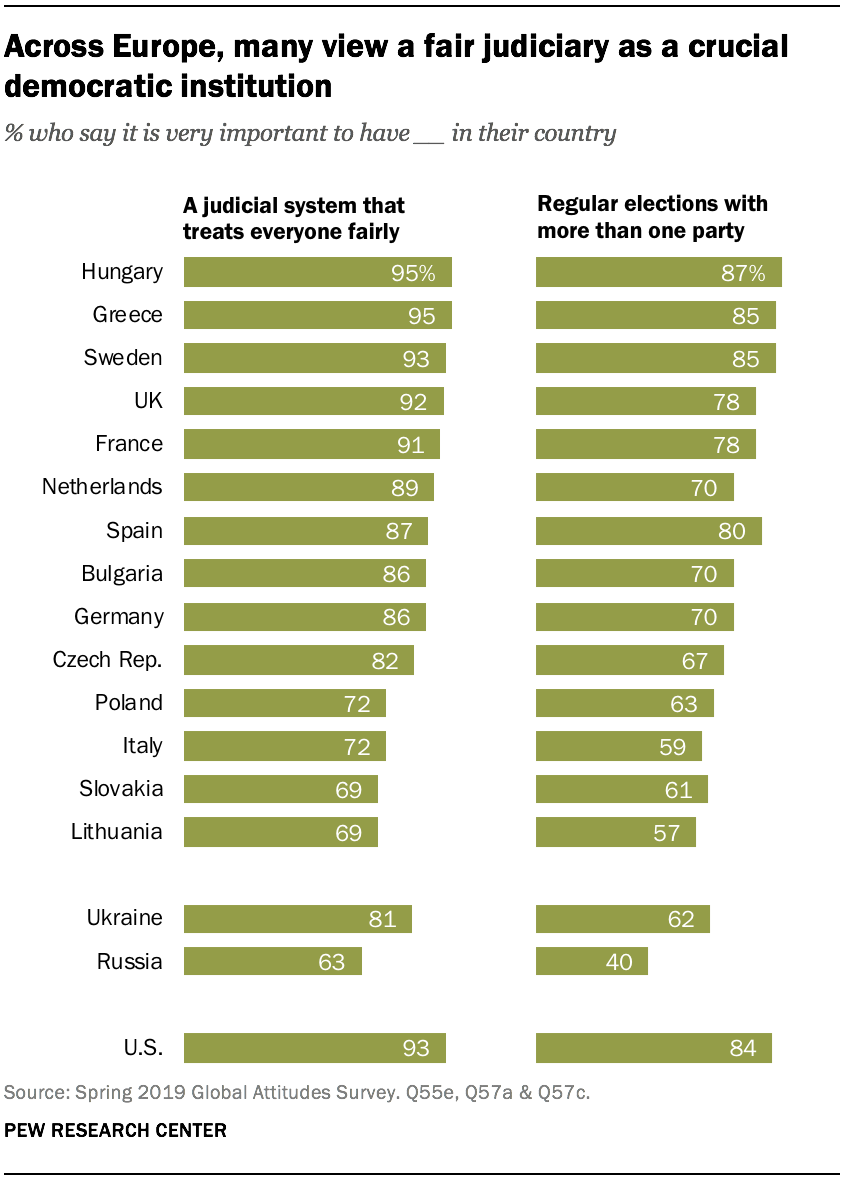 When it comes to two institutional factors that many would consider crucially important to democracy – a fair judiciary and free, regular elections – publics largely prioritize the former. More than six-in-ten in every country surveyed say a fair judiciary is very important for their country. This opinion ranges from 63% in Russia to 95% who say the same in Greece and Hungary.

In contrast, while majorities in most countries say honest elections being held regularly with a choice of at least two political parties is very important for their country, outside of Hungary it is not one of the top two issues in any country surveyed.

Most say it is very important that opposition parties, civil society can operate freely 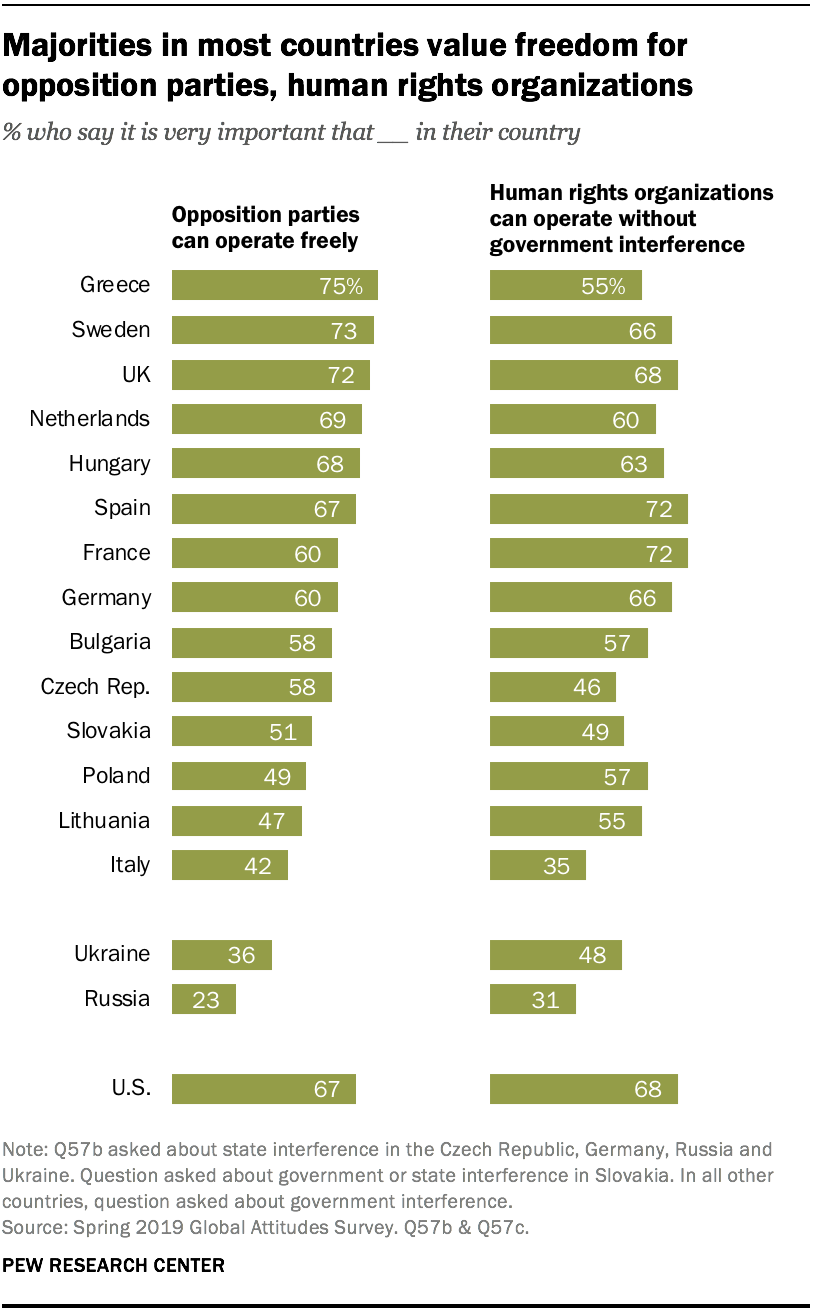 Many also see human rights organizations operating without government interference as very important. Western Europeans appear to prize civil society’s ability to act freely at somewhat higher rates than Central and Eastern Europeans (medians of 66% and 56%, respectively). But there is a great deal of variation across these EU member states, ranging from a high of 72% in Spain and France to a low of 35% in Italy. Russians (31%) are the least likely to say civil society groups operating freely is “very” important among all of the countries surveyed.

Equal rights for women are prized; less so religious freedoms 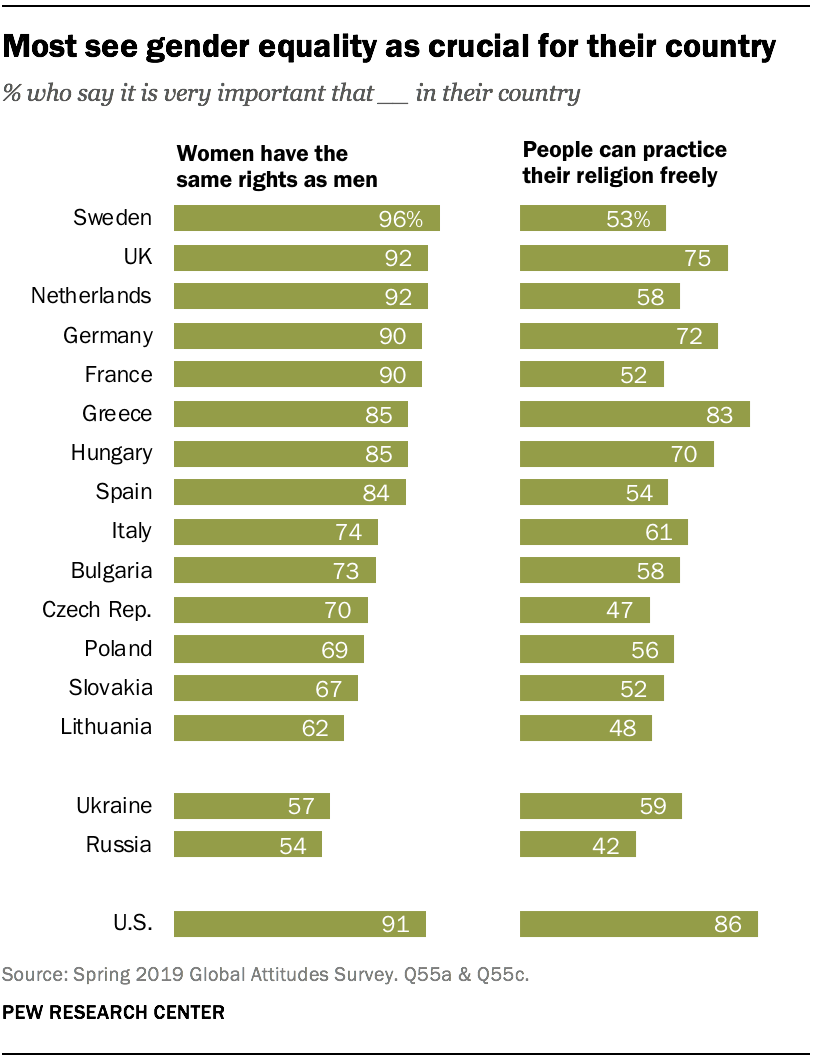 Women having the same rights as men is seen as one of the most important elements for a country across most of the countries surveyed. In fact, in Sweden (96%), the Netherlands (92%), the UK (92%), Germany (90%) and Italy (74%) it is the one facet of democracy of nine tested in the survey that garners the most people saying it is “very important” for their country. While generally seen as somewhat less important across Central and Eastern Europe, as well as in Russia and Ukraine, at least half or more still say gender equality is very important in every country surveyed.

In most countries that were also asked this question in 2015, opinions are relatively unchanged. The notable exceptions are Russia and Italy, where the percentage saying it is very important fell 18 and 14 points, respectively. Over the same period, Britons grew more likely to say religious freedoms are very important.

Most see freedom of expression – especially free speech – as crucial 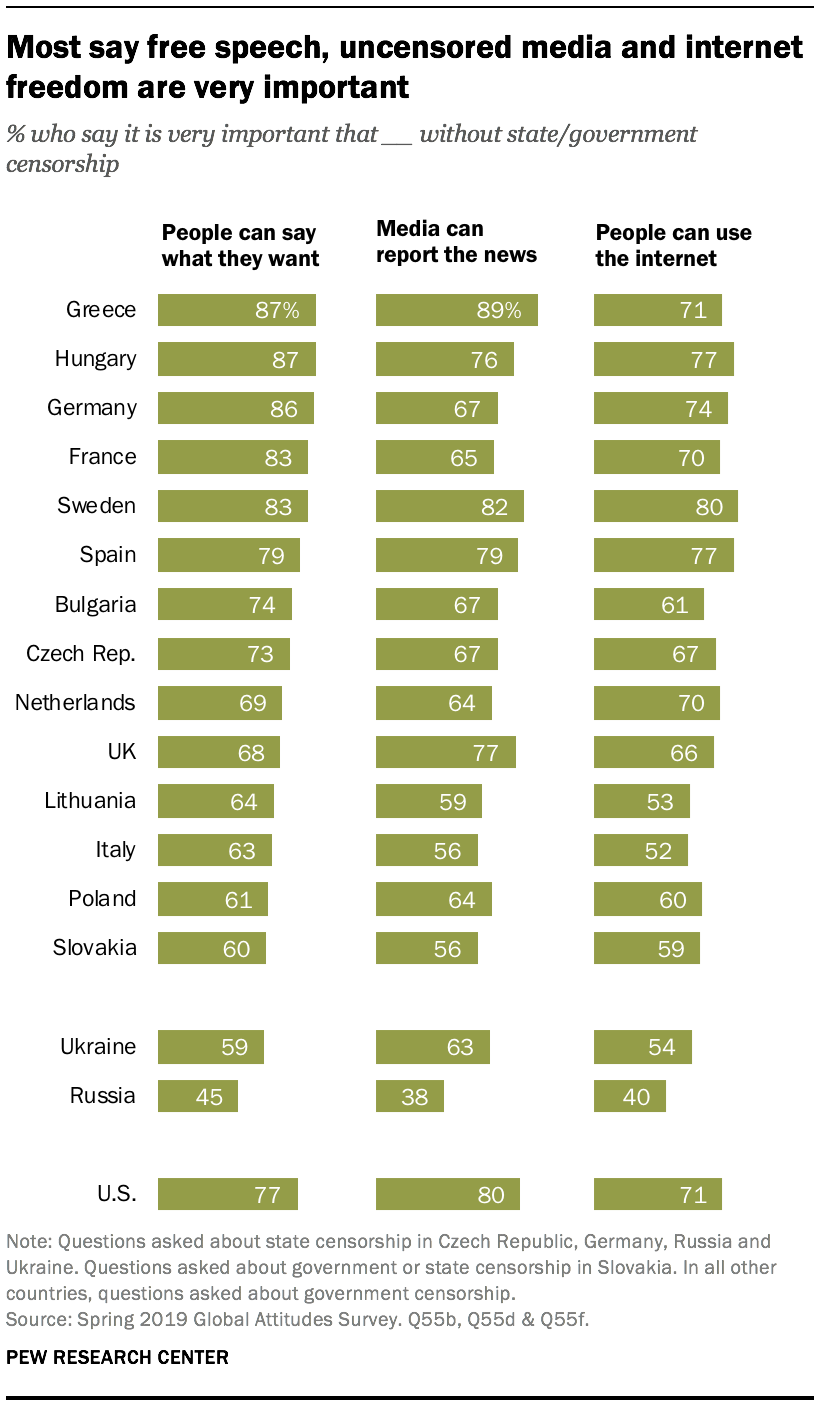 People’s right to say what they want without state or government censorship is a key issue for many across the continent. With the exception of Russia, around six-in-ten or more in all nations polled say it is very important that people can speak freely – including more than eight-in-ten in Greece, Hungary, Germany, France and Sweden. In most countries, more people say it is very important that people can speak without government censorship than say the same of the media reporting news or people using the internet without censorship – even though all three are generally seen to be important. In France, Hungary and the UK, freedom of speech has increased as a key value since 2015 or 2016 when the question was last asked (up 16, 13 and 11 percentage points, respectively).

The ability for the media to report the news without state or government interference is also very important for many of the publics polled. In Greece, the U.S., Spain, the UK, Poland and Ukraine, publics rate media censorship as most crucial to avoid of the three censorship types asked about. And, outside of Russia, majorities in every country say press freedom is very important.

The relative importance of this issue, though, has shifted somewhat among the countries that were also asked this in 2015 and 2016. In the UK and France, the shifts have been dramatic: In each country, the percentage saying it is very important that the media can report freely has increased 19 points. In the U.S. and Poland, there has been a double-digit increase in people saying that this is crucial (+13 and +10 points, respectively). But in Russia (-8 points), Italy (-8) and Germany (-6), fewer now say censorship-free reporting is very important for their country.

Only in the Netherlands does the ability to use the internet without state or government interference the type of censorship rank as most important for the public. But, in all but Russia, around half or more still say the ability to use the internet freely is very important. As with the other forms of censorship, Western Europeans are more likely than Central and Eastern Europeans to prioritize an open internet. The relative importance of this issue has risen in France (up 20 percentage points), the UK (+13 points), Hungary (+9) and Spain (+8) since these countries were last asked in 2015 and 2016, even while it has fallen in Italy (-9). 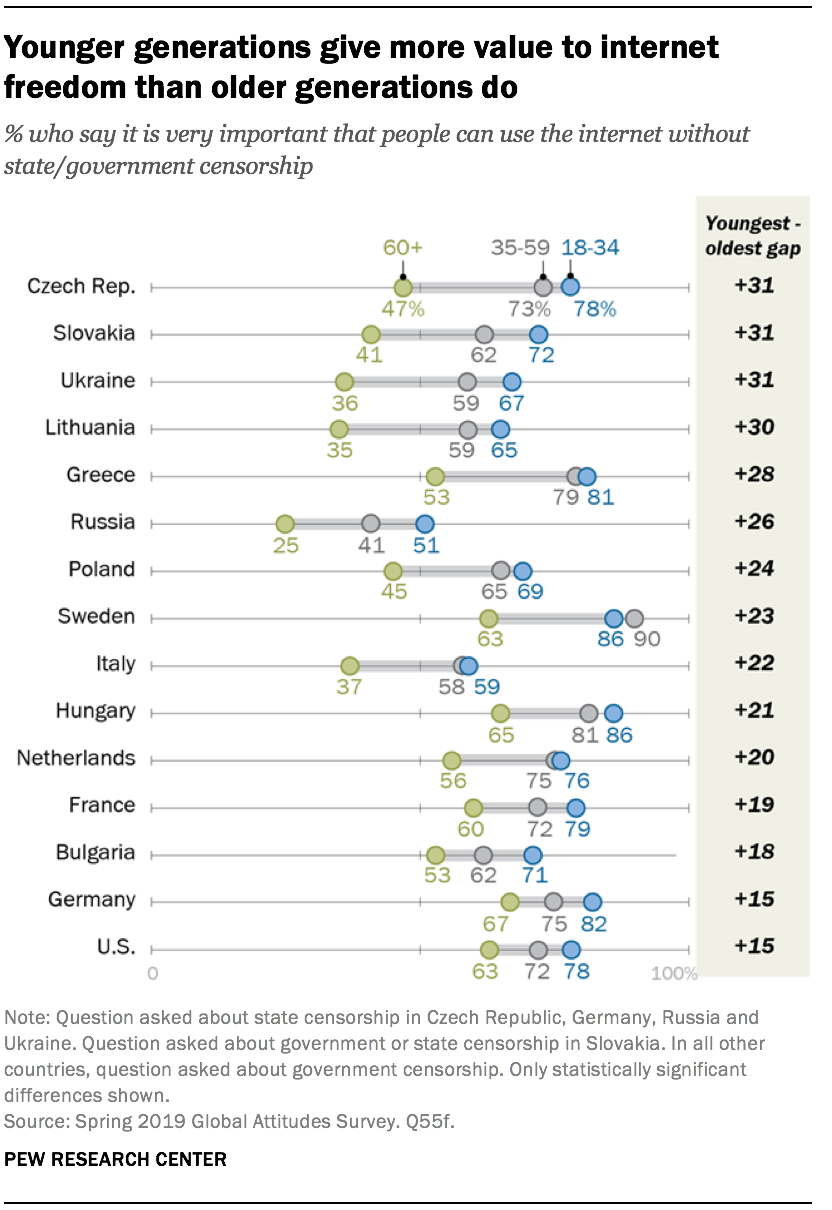 Notably, across most of the facets asked about in the survey, younger people diverge little from older people in their assessments of which institutions or freedoms are very important. But, when it comes to the freedom to use the internet without state or government censorship, younger people are much more likely than older people to say it is very important in almost every country surveyed. For example, in the Czech Republic, around three-quarters of those ages 18 to 34 say it is very important that people can use the internet without interference, compared with only around half of those ages 60 and older. In many of these same countries, older people are less likely to give a response than younger people.