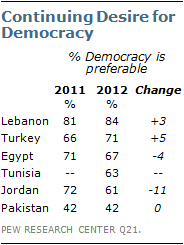 More than a year after the first stirrings of the Arab Spring, there continues to be a strong desire for democracy in Arab and other predominantly Muslim nations. Solid majorities in Lebanon, Turkey, Egypt, Tunisia and Jordan believe democracy is the best form of government, as do a plurality of Pakistanis.

Indeed, these publics do not just support the general notion of democracy – they also embrace specific features of a democratic system, such as competitive elections and free speech.

A substantial number in key Muslim countries want a large role for Islam in political life. However, there are significant differences over the degree to which the legal system should be based on Islam.

The United States is not seen as promoting democracy in the Middle East. In newly democratic Tunisia, only about three-in-ten believe the American response to the political upheaval in their country has had a positive impact.

Despite the tumult and uncertainty of the last year, views about democracy are mostly unchanged since 2011, although support has declined somewhat in Jordan. Enthusiasm for democracy tends to be generally less intense in Jordan and in Pakistan. It is consistently strong in Lebanon and Turkey.

While democratic rights and institutions are popular, they are clearly not the only priorities in the six Muslim majority nations surveyed. In particular, the economy is a top concern. And if they had to choose, most Jordanians, Tunisians and Pakistanis would rather have a strong economy than a good democracy. Turks and Lebanese, on the other hand, would prefer democracy. Egyptians are divided.

There is also a strong desire for Islam to play a major role in the public life of these nations, and most want Islam to have at least some influence on their country’s laws. Majorities in Pakistan, Jordan and Egypt believe laws should strictly follow the teachings of the Quran, while most Tunisians and a 44%-plurality of Turks want laws to be influenced by the values and principles of Islam, but not strictly follow the Quran. 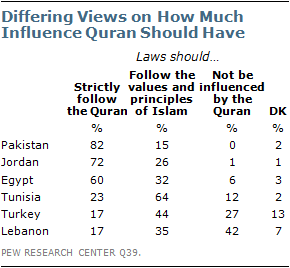 Just as opinions about religion and politics vary across these six nations, so do views about gender equality. Majorities in all six believe women should have equal rights as men, and more than eight-in-ten hold this view in Lebanon and Turkey. However, in Egypt – where the role of women in society has been a heavily debated issue throughout the post-Mubarak transition period – a slimmer 58%-majority favors equal rights, while 36% oppose the idea. Only 53% of Egyptian men endorse equal rights.

Moreover, while many support the general principle of gender equality, there is less enthusiasm for gender parity in politics, economics, and family life. For instance, many believe men make better political leaders, that men should have more of a right to a job than women when jobs are scarce, and that families should help choose a woman’s husband.

These are among the key findings from a survey by the Pew Research Center’s Global Attitudes Project, conducted in six predominantly Muslim nations March 19 to April 20.1 The poll, which is part of the broader 21-nation spring 2012 Global Attitudes survey, found considerable optimism – at least among Arab publics – about the prospects for democracy in the region. Solid majorities in Egypt, Tunisia, Jordan and Lebanon said the 2011 popular uprising would lead to more democracy in the Middle East. Turks and Pakistanis, on the other hand, were less hopeful.

This report includes a special section on Tunisian public opinion (see Part II). In the nation where the Arab Spring began, large majorities say they are dissatisfied with the country’s direction and its economic situation. While Tunisians embrace their country’s nascent democracy, they are divided over whether things in their country have actually gotten better since long-running dictator President Zine el-Abidine Ben Ali was forced from office. Still, most are hopeful about Tunisia’s future and optimistic that the economy will improve in the next 12 months. And despite the dissatisfaction with current conditions, the ruling Islamist party Ennahda receives positive marks from 65% of Tunisians.

Both Democracy and Economy Are Priorities

Majorities in five of the six nations polled (and a plurality of Pakistanis) believe democracy is the best form of government. Moreover, there is a strong desire in these nations for specific democratic rights and institutions, such as competitive multi-party elections and freedom of speech. 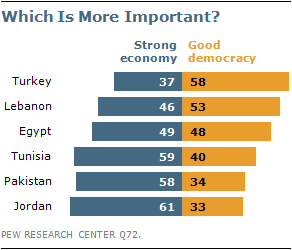 Other goals are also clearly important. Many say political stability is a crucial priority, and even more prioritize economic prosperity. When respondents are asked which is more important, a good democracy or a strong economy, Turkey and Lebanon are the only countries where more than half choose democracy. Egyptians are divided, while most Tunisians, Pakistanis and Jordanians prioritize the economy.

Overall, views about the economic situation in these countries are grim, although Turkey is a notable exception. Nearly six-in-ten Turks (57%) say their country’s economy is in good shape, but at least seven-in-ten in Pakistan, Lebanon, Tunisia, Egypt and Jordan offer negative assessments.

A Major Role for Islam in Public Life

In five of six nations, solid majorities say Islam is already playing a large role in the country’s political life. In newly democratic Tunisia, where the Islamist party Ennahda won the largest share of votes in the recent parliamentary elections, fully 84% think Islam has a major role. 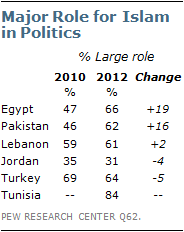 Similarly, in Egypt, where the Muslim Brotherhood has won both parliamentary and presidential elections, 66% hold this view, up from 47% two years ago.

The view that Islam plays a large role in political life has also become more prevalent in Pakistan over the last two years. Meanwhile, more than six-in-ten in Turkey and Lebanon believe Islam is a major part of political life in their countries. This view is especially pervasive among Lebanese Christians – 75% think Islam has a major role.

The clear exception on this issue is Jordan. Only 31% of Jordanians believe Islam currently plays a large part in their nation’s political life, while 63% say it has a small role. Among the majority of Jordanians who say Islam is playing a small role, 80% say it is a bad thing that Islam has only a minor part in the country’s politics.

Support for Gender Equality – but Not in All Circumstances 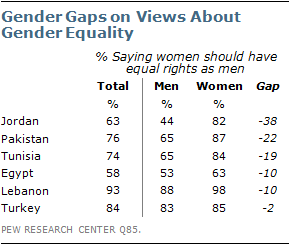 While majorities in all six countries support the principle of gender equality, there are significant differences between men and women on this issue. The most striking gender gap is in Jordan, where 82% of women but just 44% of men say women should have the same rights as men.

Moreover, while there is majority support for the idea of gender equality, this does not necessarily apply to specific aspects of public and private life. For instance, at least half in Tunisia, Pakistan, Turkey and Jordan say men make better political leaders. When it comes to economics, most say women should be able to work outside the home, but most also believe that when jobs are scarce, jobs for men should be the first priority. And in the personal realm, many of those surveyed believe a woman’s family should help choose her husband, rather than the woman herself – indeed, in Pakistan and Jordan this is the majority view. 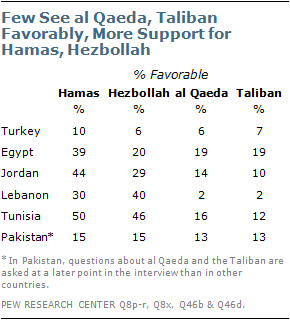 Extremist groups are largely rejected in predominantly Muslim nations, although significant numbers do express support for radical groups in several countries. For instance, while there is no country in which a majority holds a favorable opinion of the Palestinian organization Hamas, it receives considerable support in Tunisia, Jordan and Egypt.

The militant Lebanese Shia group Hezbollah receives its highest overall ratings in Tunisia, where nearly half express a positive opinion. Sizable minorities in both Jordan and Egypt also have a favorable view, but Hezbollah’s image has been declining in both countries in recent years. In its home country, views about Hezbollah are sharply divided along sectarian lines: 94% of Shia, 33% of Christians, and 5% of Sunnis give the group favorable marks.

Across all six nations, less than 20% have a positive opinion about al Qaeda or the Taliban. In Turkey and Lebanon, support for these groups is in the single digits. However, fully 19% of Egyptians rate these extremist organizations favorably.

Turkey, which has significantly increased its diplomatic profile in recent years, particularly in the Middle East, is held in high regard in the predominantly Muslim nations surveyed. Solid majorities in all six nations express a favorable opinion of Turkey. Moreover, its leader, Prime Minister Recep Tayyip Erdogan of the moderate Islamist party AKP, also receives largely positive reviews. 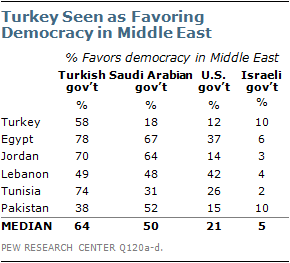 Most of those surveyed believe Turkey favors democracy in the Middle East, including roughly three-in-four in the newly democratic nations of Egypt and Tunisia. Fewer say this about Saudi Arabia, although more than half in Egypt, Jordan and Pakistan think the oil-rich kingdom does support democracy in the region.

Tunisians Unhappy With State of Country, but Still Hopeful

Nearly eight-in-ten Tunisians (78%) are dissatisfied with the way things are going in their country and a similar number (83%) describe current economic conditions as bad. And the country is split over whether it is better off now that Zine el-Abidine Ben Ali is no long in power.

However, Tunisians show few signs of wanting a return to autocracy. A majority says a democratic government is preferable, even if that means some risk of instability, and large majorities deem rights and institutions such as a fair judiciary, honest elections, and free speech very important.

And while they are glum about current conditions, they are hopeful about the future. Two-thirds (66%) are optimistic about Tunisia’s future, and 75% think the country’s economy will improve in the next 12 months.

The ruling Ennahda party gets largely positive reviews – 65% have a favorable opinion of the Islamist organization, which was banned from politics during the Ben Ali era. Two Ennahda leaders, party co-founder Rached Ghannouchi and current Prime Minister Hamadi Jebali, are viewed favorably by about two-in-three Tunisians.

The U.S. receives mixed reviews in Tunisia. Overall, 45% have a favorable and 45% an unfavorable view of the U.S. However, President Barack Obama gets mostly poor marks – 57% say they have little or no confidence that Obama will do the right thing in world affairs. And there is no consensus among Tunisians about how the U.S. has handled the political changes taking place in their country – 31% believe the American response has had a positive effect, 27% say it has been negative, and 25% volunteer that the U.S. has had no impact.

Next: Chapter 1. Public Mood After the Arab Spring
← Prev Page
You are reading page1Page2Page3Page4Page5Page6Page7Page8Page9Page10
Next Page →

The Tahrir Square Legacy: Egyptians Want Democracy, a Better Economy, and a Major Role for Islam
Arab Spring Fails to Improve U.S. Image
Tunisian Confidence in Democracy Wanes
Tunisians Disaffected with Leaders as Conditions Worsen
How the United States is Perceived in the Arab and Muslim Worlds