Following a politically turbulent year in much of the Arab world, democracy continues to be the preferred form of government in the four Arab nations surveyed, as well as in Turkey and Pakistan. Moreover, there is widespread support for specific democratic rights and institutions, such as multiparty elections and freedom of expression.

Still, significant minorities – and a majority of Pakistanis – believe a strong leader, rather than a democratic government, would be best equipped to solve their country’s problems. And across these six nations, there is no consensus on whether a good democracy or a strong economy should be the higher priority.

Democracy the Best Form of Government 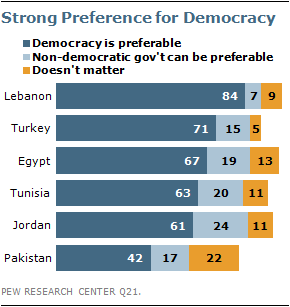 The appeal of democracy is especially strong in Lebanon, where 84% say democracy is preferable to any other kind of government, just 7% think there are circumstances in which a non-democratic government can be preferable, and 9% believe it doesn’t really matter what kind of government rules the country. On this point, there is broad agreement among the country’s religious groups – 90% of Sunnis, 84% of Shia, and 83% of Christians endorse democracy.

Large majorities also prefer democracy in Turkey, Egypt, Tunisia and Jordan. However, Jordanians have become less likely to hold this view since last year, when 72% said it was better than any other type of government.

Pakistanis express the least enthusiasm for the idea of democracy, with just 42% saying it is preferable. Still, only 17% believe other approaches are sometimes better, while 22% say it does not matter. Almost one-in-five Pakistanis (18%) do not offer an opinion. 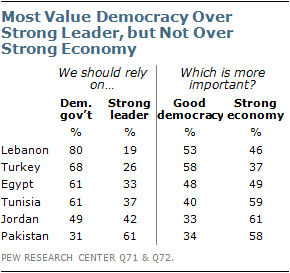 Majorities in four of six nations believe they should rely on a democratic form of government to solve their country’s problems, rather than relying on a leader with a strong hand. This view is especially common in Lebanon, where eight-in-ten believe a democratic government is best equipped to deal with the nation’s problems, up sharply from 62% a year ago.

At least six-in-ten also hold this view in Turkey, Egypt, and Tunisia. Jordanians are somewhat less certain; 49% express confidence in democracy over a strong leader, down from 59% in 2011.

Pakistan is the clear outlier on this question – just 31% think they should rely on democracy, while 61% believe they should turn to a leader with a strong hand. The percentage of Pakistanis preferring a strong leader has increased 11 points since last year.

When respondents are asked to choose which is more important, a good democracy or a strong economy, results vary considerably across nations. More than half in Turkey and Lebanon choose a good democracy, and in both countries the percentage selecting democracy is up from 2011 (+10 points in Turkey; +6 in Lebanon). Egyptians are nearly evenly divided on this issue, while in Jordan, Tunisia and Pakistan, majorities believe a strong economy should be the higher priority.

In Turkey and Lebanon, young people are more likely to prioritize a good democracy over a strong economy. About two-thirds (66%) of 18-to-29 year-olds in Turkey say democracy is more important, compared with 57% of 30-to-49 year-olds and 51% of those 50 or older. In Lebanon, 61% of those in the younger group choose democracy over a strong economy, compared with 53% among those ages 30-to-49, and 42% in the oldest group. 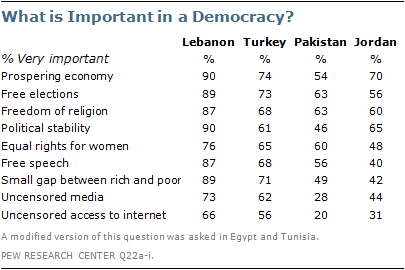 Many also say that having an uncensored press and uncensored access to the internet are very important, although these are generally considered less of a priority than other elements of democracy, particularly in Pakistan.

In all four countries, more than half say economic prosperity is a very important component of democracy. And many also say it is very important that a democracy have a small income gap between rich and poor.

As with other measures of support for democracy included in the survey, the belief that specific rights, institutions, and conditions are necessary in a democracy tends to be especially strong in Lebanon and Turkey, while somewhat lower in Pakistan and Jordan.

Next: Chapter 3. Role of Islam in Politics
← Prev Page
Page1Page2You are reading page3Page4Page5Page6Page7Page8Page9Page10
Next Page →