Reviews of the economy are generally negative in the predominantly Muslim countries surveyed. Despite the grim economic situation, however, many in Egypt and Tunisia are optimistic about the future, and majorities in the four Arab nations surveyed are hopeful the 2011 popular uprisings will lead to more democracy in the Middle East.2 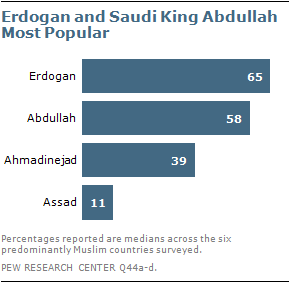 Turkey and Saudi Arabia are seen as supporting the spread of democracy in the region, while the U.S. and Israel are widely viewed as opposing it.

Majorities in all six predominantly Muslim nations have a favorable view of Turkey and most are also positive toward Turkish Prime Minister Recep Tayyip Erdogan. Saudi King Abdullah and his nation also receive high marks in many countries, though Turks and Tunisians are much less positive toward the monarchy. There is widespread disapproval of Iranian President Mahmoud Ahmadinejad and Syrian President Bashar al-Assad. 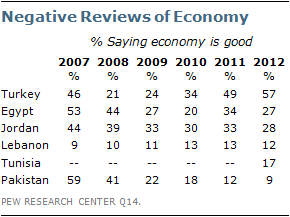 Less than a third in Pakistan, Lebanon, Tunisia, Egypt and Jordan say their current economic situation is good. Turkey is the only country where a majority thinks the economy is doing well.

In Egypt, Jordan and Pakistan, economic assessments today are more negative than they were in 2007, before the global economic crisis. For example, in Pakistan, 59% said the economy was doing well in 2007, compared with just 9% now. The Lebanese, meanwhile, have consistently said their economy is doing poorly over the past five years.

Turkey is the only predominantly Muslim country surveyed in both 2007 and 2012 where reviews of the economy have recovered from the economic crisis. Positive ratings today are 36 percentage points higher than the low of 21% in 2008. 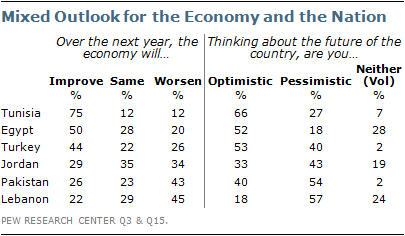 The economic outlook over the next 12 months is more mixed. Pluralities or majorities in Tunisia, Egypt and Turkey believe the economy will improve. However, less than a third of Jordanians, Pakistanis and Lebanese say the same. 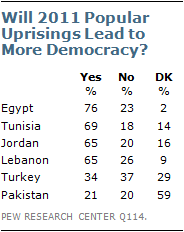 Solid majorities in the Arab nations surveyed believe the 2011 popular uprisings will lead to more democracy in the Middle East, including nearly three-quarters in Egypt and seven-in-ten in Tunisia. Roughly two-thirds in Jordan and Lebanon agree.

Attitudes are more divided in Turkey and Pakistan. In Turkey, about a third (34%) believes the Arab Spring will result in the spread of democracy in the region, while a similar percentage (37%) is doubtful and 29% express no opinion. In Pakistan, almost equal percentages say there will (21%) and will not (20%) be more democracy, though most say they do not know (59%).

Most See Turkey as Supportive of Democracy 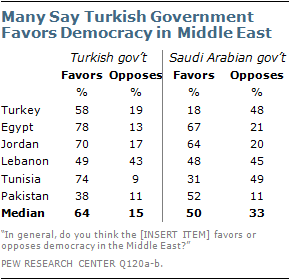 Respondents generally see Turkey and Saudi Arabia, but not the U.S. or Israel, as proponents of democracy in the Middle East. Roughly six-in-ten or more in Egypt, Tunisia, Jordan and Turkey believe the Turkish government is supportive of democracy in the region. Pakistani opinion is also, on balance, positive.

Roughly two-thirds in Egypt and Jordan say the Saudi Arabian government favors democracy in the Middle East. About half (52%) of Pakistanis also hold this view. However, fewer than a third of Tunisians (31%) and Turks (18%) agree. 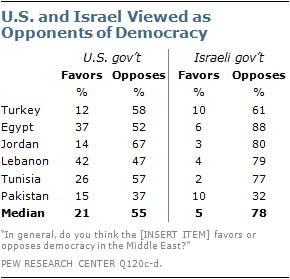 Opinion is decidedly more negative about the U.S. and Israel. Majorities or pluralities in Jordan, Turkey, Tunisia and Egypt believe the American government opposes democracy in the region. Broad majorities across nearly all the countries surveyed say the same about the Israeli government. Attitudes in Pakistan are, on balance, negative about both the U.S. and Israel, though many express no opinion (41% and 55%, respectively).

In Lebanon, opinions as to whether Turkey, Saudi Arabia or the U.S. favors democracy in the Middle East vary considerably by religious affiliation. More than eight-in-ten Shia Muslims in Lebanon believe each of these governments oppose democracy. Majorities of Sunni Muslims and Christians, meanwhile, see Turkey, Saudi Arabia and the U.S. in a positive light. When it comes to Israel, however, at least seven-in-ten across all three religious groups believe the Israeli government opposes the spread of democracy in the Middle East. 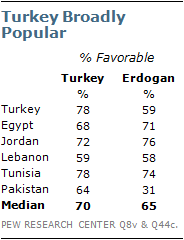 Turkish Prime Minister Recep Tayyip Erdogan and Saudi King Abdullah, and their nations, are more popular than either Iranian President Mahmoud Ahmadinejad or Syrian President Bashar al-Assad. Seven-in-ten across the countries surveyed are favorable toward Turkey and about two-thirds (65%) have a positive view of its prime minister. The one exception is Pakistan, where the public is, on balance, positive toward Erdogan – 31% favorable and 11% unfavorable – but most (58%) are unfamiliar with him.

While in office, Erdogan has made a concerted effort to reach out to his regional neighbors and it appears his efforts are paying off. Since 2002, favorable ratings of Turkey have increased by 39 percentage points in Jordan and 29 points in Lebanon. Since 2011, ratings have also increased in Pakistan (+14) and Egypt (+6).

Opinion of Saudi Arabia is somewhat more mixed, though many are favorable. Egyptians, Jordanians and Pakistanis are overwhelmingly positive toward the country, and majorities in these countries also give Abdullah warm reviews.

Turkey and Tunisia, however, are decidedly negative toward Saudi Arabia and its ruler, with four-in-ten or fewer giving either the nation or the leader favorable ratings. The Lebanese are split: majorities of Sunnis (70%) – who constitute the dominant branch of Islam in Saudi Arabia – have a positive view of that country while 95% of Shia are unfavorable. Nearly two-thirds of Christians (64%) are positive.

Iran is much less popular across the six countries. Roughly four-in-ten or fewer in Tunisia, Lebanon, Turkey, Egypt and Jordan give Iran and its leader, Ahmadinejad, favorable reviews. Only in Pakistan is a majority favorable toward Iran, and almost half of Pakistanis are also positive toward Ahmadinejad.

Although attitudes about Iran are generally negative in Lebanon, large differences emerge between religious groups. Lebanese Shia Muslims (91%) are overwhelmingly favorable while Sunnis (95% negative) and Christians (68% negative) are unfavorable. Shia account for the overwhelming majority of Iran’s Muslims. 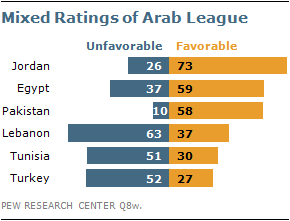 The Arab League, which played a major role in responding to the violence in Libya, receives mixed reviews. Majorities in Jordan, Egypt and Pakistan are favorable toward the organization. The Lebanese, Tunisians and Turks, however, are generally unfavorable. 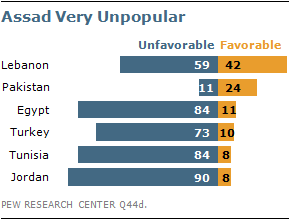 Most give Syrian President Bashar al-Assad, who has led a brutal crackdown on protestors in his country, negative ratings. More than seven-in-ten in Jordan, Egypt, Tunisia and Turkey hold unfavorable views.

In Lebanon, a majority is negative toward Assad, though a substantial minority is positive. Support for Assad is nearly universal (96%) among Shia Muslims in Lebanon, while just 8% of Sunnis and 34% of Christians are favorable.

In Pakistan, attitudes are, on balance, positive, though most are unfamiliar with him (64%). (For more on views about Syria and President Bashar al-Assad, see “Widespread Condemnation for Assad in Neighboring Countries,” released June 21, 2012).

Next: Chapter 2. Views of Democracy
← Prev Page
Page1You are reading page2Page3Page4Page5Page6Page7Page8Page9Page10
Next Page →