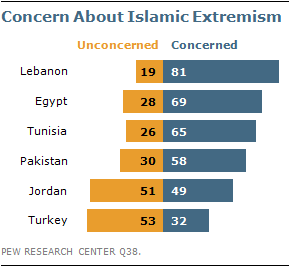 Majorities in most of the predominantly Muslim nations surveyed remain worried about Islamic extremism in their countries, especially in Lebanon, but concern about extremism has declined sharply in Turkey since 2011.

Few express positive views of extremist groups Hamas and Hezbollah. Still, both groups have substantial minority support in several countries. Al Qaeda and the Taliban, on the other hand, are viewed negatively by majorities in all the nations polled. 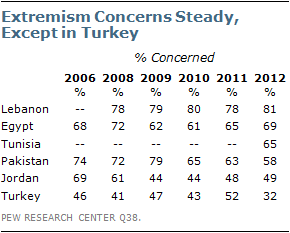 In five of the six predominantly Muslim countries surveyed, concern about extremism is essentially unchanged since last year. Turkey is the lone exception. In 2011, just months after an October 2010 suicide bombing in the center of Istanbul, concern about Islamic extremism was at 52%. Today, that number has fallen 20 percentage points and is at its lowest point since the question was first asked in 2006.

In Turkey, men are slightly more worried about Islamic extremism than women (27%), while in Pakistan women are much more concerned. Roughly seven-in-ten Pakistani women (71%) are very or somewhat concerned, while only 46% of men say the same.

Hamas Viewed Unfavorably By Most 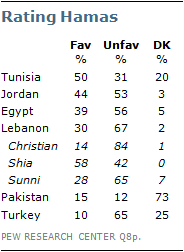 In four of the six predominantly Muslim countries polled, publics express an unfavorable view of Hamas. In Tunisia, half express a favorable view of the militant Palestinian organization, while in Pakistan, nearly three-in-four (73%) offer no opinion.

Despite Hamas being a Sunni organization, roughly six-in-ten Lebanese Shia (58%) hold a favorable view of Hamas, but only 28% of Sunnis and 14% of Christians do.

Support for Hamas has held generally steady over the past year, with only a slight decline in Egypt (-6 percentage points). 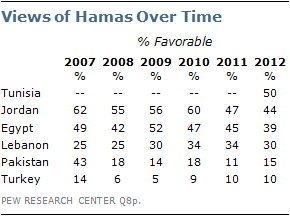 However, support for the extremist group is down substantially in Pakistan and Jordan since 2007. 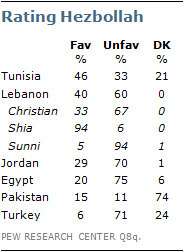 Lebanese views of Hezbollah are sharply divided among religious groups, with 94% of Shia expressing favorable views of the militant group, compared with only one-third of Christians and 5% of Sunnis. 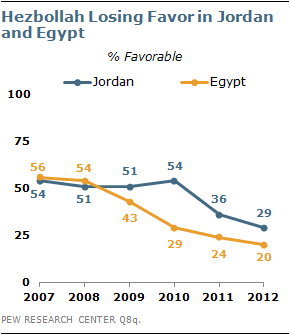 Over the last five years, positive views of Hezbollah have declined substantially in Egypt (-36 percentage points) and Jordan (-25) to their lowest levels measured since the question was first asked in 2007.

Favorable views of the militant group have also fallen in Pakistan (-28), although the number of people having no opinion has gone up by a similar amount in that country over this time period. 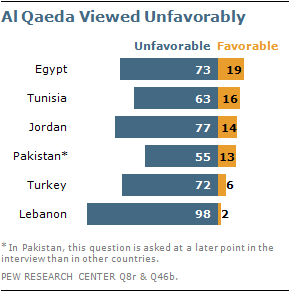 Majorities in all the predominantly Muslim nations polled express negative views of al Qaeda, including more than seven-in-ten in Lebanon, Jordan, Egypt and Turkey.

In Tunisia, only 16% have a favorable view of the terrorist organization, with roughly six-in-ten (63%) holding a negative opinion.

Support for al Qaeda is mostly unchanged from last year. In Jordan, however, just 14% express a positive opinion today, down significantly from 34% in 2010.

Overwhelming Disdain for the Taliban 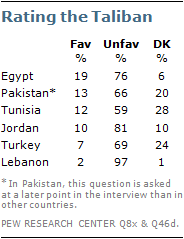 This distaste for the extremist Islamist organization is evident across age, gender and educational groups in each of the countries surveyed.

(For more on Pakistani views of the Taliban see, “Pakistani Public Opinion Ever More Critical of U.S.,” released June 27, 2012.)

Next: Chapter 6. Tunisia: National Conditions and Views of the Future
← Prev Page
Page1Page2Page3Page4Page5You are reading page6Page7Page8Page9Page10
Next Page →