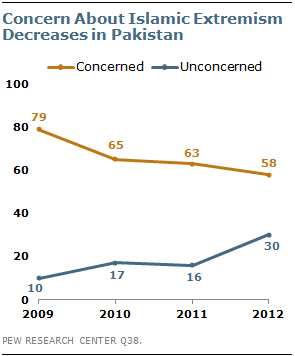 Islamic extremism remains a pressing issue for most Pakistanis, although concern has ebbed somewhat over the last few years. Today, about half of the public is either very or somewhat worried that extremist groups could take control of their country. Only about one-in-three now support using the military to fight extremists, down substantially from three years ago.

Overall, the Taliban are seen as more of a threat than al Qaeda. Neither organization is viewed favorably by Pakistanis. The same holds true for groups affiliated with the Taliban, such as Tehrik-i-Taliban and the Afghan Taliban. Slightly more express a favorable opinion of Lashkar-e-Taiba, a Pakistani extremist organization that is active in Kashmir, but this group, too, is viewed negatively on balance.

Concerns about the threat posed by al Qaeda and the Taliban are especially evident in Khyber Pakhtunkhwa, which has been subject to considerable violence and disruption due to extremist groups and the international hunt for their leaders.

Roughly half of Pakistanis (52%), meanwhile, say they are very or somewhat worried about the possible takeover of their country by extremist groups. Fears of such an event have remained fairly constant over the past two years, but were more widespread in 2009 when 69% said they were concerned about extremists possibly seizing control of Pakistan.

When asked about the threat posed by specific groups, nearly six-in-ten (58%) describe the Taliban as a serious or somewhat serious threat to Pakistan, compared with only 47% who say the same about al Qaeda. 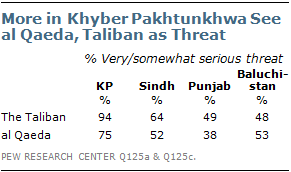 Regionally, residents of Khyber Pakhtunkhwa are much more concerned than those living elsewhere in Pakistan about the risk posed by al Qaeda and the Taliban. More than nine-in-ten (94%) in this province on the frontier with Afghanistan see the Taliban as a serious threat, while three-quarters say the same about al Qaeda. Elsewhere in Pakistan, only in Sindh province do more than six-in-ten (64%) share the view that the Taliban is a serious threat. 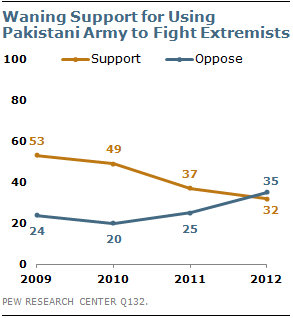 Support for using the Pakistani military to fight extremist groups has declined notably over the last three years. Today, just 32% favor deploying the army to battle extremists in the Federally Administered Tribal Areas (FATA) and Khyber Pakhtunkhwa, compared with 53% in 2009.

Opposition to using the army to fight extremist organizations is especially high in Khyber Pakhtunkhwa (54% oppose) and Baluchistan (50%), as well as among those who identify with the Tehreek-e-Insaf party (51%).

Militant groups such as al Qaeda and the Taliban have limited appeal among Pakistanis. Relatively few Pakistanis express a positive view of either al Qaeda (13%) or the Taliban (13%). Majorities view both groups unfavorably (55% and 66%, respectively). And in both cases, opinion has been consistently negative since 2009. In 2008, pluralities expressed no opinion about these groups.

Attitudes toward groups affiliated with the Taliban fare no better in the eyes of the Pakistani public. Tehrik-i-Taliban, an umbrella organization of Taliban-linked groups in Pakistan, and the Afghan Taliban are viewed positively by only 17% and 14% of Pakistanis, respectively. Roughly half have negative opinions of both groups (52% and 45%, respectively).

The Haqqani network, which is also associated with the Taliban movement, is viewed favorably by only 5% of Pakistanis. Roughly three-in-ten (31%) express a negative opinion of the group, while fully 64% do not have a definite opinion.

Attitudes toward Lashkar-e-Taiba are somewhat more positive: 22% say they have a favorable opinion of this militant group, while 37% hold the opposite view and 41% do not have an opinion either way.

In general, favorable attitudes toward these different militant groups do not vary significantly across regions. However, unfavorable opinion tends to be especially widespread in Khyber Pakhtunkhwa province. In the case of al Qaeda, the Taliban, Tehrik-i-Taliban, the Afghan Taliban and Lashkar-e-Taiba, residents of this frontier region are substantially more negative (10 to 27 percentage points) in their views than Pakistanis in other provinces. This may reflect the fact that a number of these militant groups have sought refuge in Khyber Pakhtunkhwa, bringing increased violence to the region. 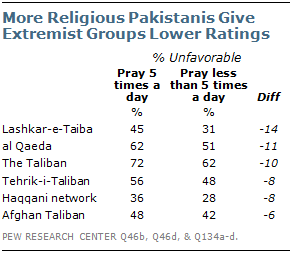 More religious Pakistanis – defined as those who pray five times a day – also tend to be more unfavorable in their attitudes toward militant groups. For example, religiously observant Pakistanis are eight to 14 percentage points more negative in their assessment of groups such as al Qaeda, the Taliban and Lashkar-e-Taiba, than those who are less observant.

Next: Chapter 3. Relations With India
← Prev Page
Page1Page2You are reading page3Page4Page5Page6Page7
Next Page →