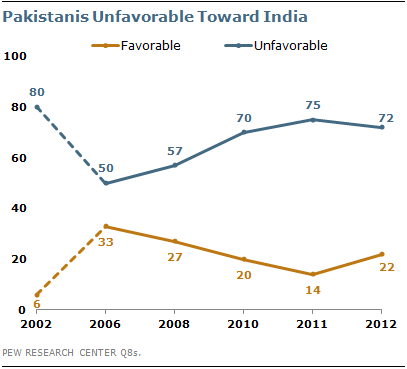 Pakistanis and Indians continue to hold largely negative opinions of one another. Nearly three-quarters of Pakistanis have an unfavorable view of their neighbor, little changed from last year but up significantly from 2006, when only 50% expressed a negative view. A broad majority also names India as the biggest threat to their nation.

Similarly, most Indians – and other Pakistani neighbors – have an unfavorable view of Pakistan. Overwhelmingly, Indians see Pakistan as a serious threat to their country.

Despite these deeply negative views of each other, a majority in each country wants to improve relations through both diplomatic endeavors and bilateral trade. While support for increasing ties between the two nations remains high, enthusiasm has decreased somewhat since 2010 in Pakistan.

Pakistanis are very negative toward India – about seven-in-ten (72%) are unfavorable, including a majority (55%) that is very unfavorable. Less than a quarter (22%) are positive. Pakistanis have consistently given India negative reviews over the past few years; however, favorable ratings are up eight percentage points since 2011. 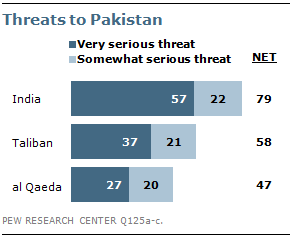 Given the history of military conflict between the two countries, it is perhaps unsurprising that roughly eight-in-ten Pakistanis (79%) say India is a serious threat to their nation, including 57% who believe it is a very serious threat. Fewer say the Taliban (58%) and al Qaeda (47%) are a major danger.

When asked which is the greatest threat – India, the Taliban, or al Qaeda – a clear majority names India. Roughly a quarter cite the Taliban and only 4% say al Qaeda. India has been seen as Pakistan’s principal threat since the question was first asked in 2009. 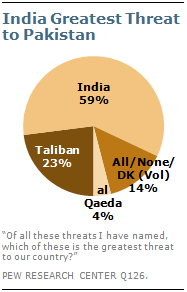 Supporters of two major opposition parties – the Pakistan Muslim League (PML-N) and Pakistan Tehreek-e-Insaf (PTI) are much more likely to name India as the biggest danger (71% and 61%, respectively) than those that affiliate with the governing Pakistan Peoples’ Party (PPP), where this view of India is held by 46%.

Indians are also very negative toward Pakistan. Just 13% express favorable opinions of their neighbor. This is the lowest percentage among the eight countries where this question was asked. However, Pakistan does not receive much warmer reviews in the other countries surveyed. 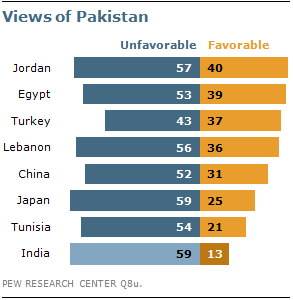 Among the other Asian nations polled, 52% in China see Pakistan unfavorably, as do 59% in Japan. In four of the five predominantly Muslim nations, over half give Pakistan negative ratings. The only exception is Turkey, where attitudes are divided.

Nearly three-quarters of Indians (76%) say Pakistan is a serious threat, including 59% who say it is a very serious threat. A majority (63%) also believes Lashkar-e-Taiba, a militant Islamist organization in Pakistan, is a danger, while 65% say the same about the communist extremist groups in India called the Naxalites. Roughly half (53%) are concerned about China.

Among these four potential threats to India, a plurality (41%) of Indians name Pakistan as the most serious. Less than two-in-ten choose Lashkar-e-Taiba (19%) or the Naxalites (16%), while only 5% worry the most about China.

Despite Indians’ and Pakistanis’ mistrust of each other, there is broad support in each country for a better relationship. However, enthusiasm for such efforts has waned over the past two years in Pakistan. 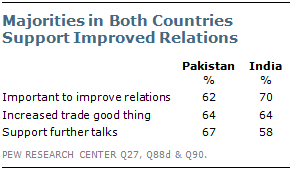 A clear majority in India believes that it is important to improve relations between the two countries. While 62% of Pakistanis agree, this is less than the 70% last year that prioritized improving Pakistani-Indian relations.

Similarly, majorities in both Pakistan and India support further talks to reduce tensions between the two nations. However, approval has fallen in Pakistan since 2010, when 76% favored diplomatic discussions.

More than six-in-ten in Pakistan and India also say that increased trade between the two countries would be a good thing. The percentage in Pakistan who believes better economic relations would be positive for their country has decreased, however, from a high of 77% in 2010. 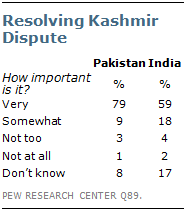 The dispute over Kashmir is a main point of contention between Pakistan and India. A solid majority (68%) of Pakistanis say the situation in Kashmir is a very big problem for their country.

Given this, roughly eight-in-ten Pakistanis also think it is very important for the two countries to resolve their differences over the region. About six-in-ten Indians agree.

U.S. Relations With India and Pakistan 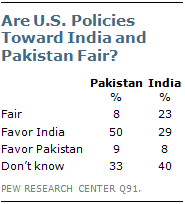 Pakistanis are much more likely than Indians to believe that U.S. policies favor India. Half say American policies tilt toward India, while roughly one-in-ten thinks the U.S. is fair (8%) or favors Pakistan (9%).

Many respondents in both Pakistan and India say the U.S.-India relationship has improved in recent years. Roughly a third (35%) in Pakistan and more than four-in-ten (43%) in India say relations have gotten better. Many do not have an opinion (39% in Pakistan, 41% in India).