There is broad discontent with national conditions in Pakistan. Nearly nine-in-ten are dissatisfied with the country’s direction and the national economy. Pessimism about the economic future also remains high, though it has dropped somewhat over the past year.

According to respondents, the biggest obstacles for Pakistan are crime and a lack of jobs, as well as terrorism. Roughly nine-in-ten rate these issues as a very big problem. Also high on the list are corrupt political leaders and illegal drugs – about three-quarters say these are major concerns.

Broad Dissatisfaction With Country and Economy

Pakistanis are very unhappy with current national conditions – nearly nine-in-ten (87%) are dissatisfied with the way things are going in their country, while just 12% are satisfied. Country satisfaction has changed only slightly since last year, when 6% said the country was headed in a positive direction.

More than half (54%) are pessimistic about the country’s future. Despite these gloomy assessments, there is some hope – a substantial minority (40%) says they are optimistic about the nation’s prospects. 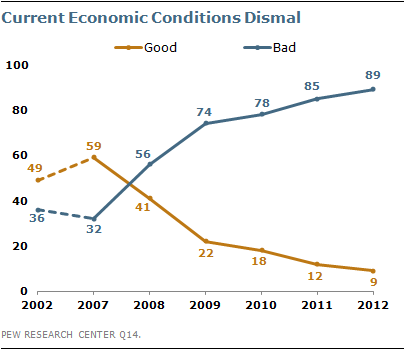 As with the country’s direction, Pakistanis give the economy very negative reviews. Roughly nine-in-ten say the economy is bad, including a majority (64%) that says it is very bad. Just 9% rate the economy positively. There has been a sharp decline in economic ratings in Pakistan since the beginning of the global economic recession. In 2007, 59% said the economy was doing well; by 2008, this percentage had dropped to 41% and has continued to fall since then.

A plurality (43%) in Pakistan believes the economy will continue to worsen over the next 12 months. Roughly a quarter (26%) says it will improve and another 23% think it will stay the same. While economic pessimism continues to be high, it is lower than in 2011, when 60% of respondents believed the economy would deteriorate over the coming year.

Crime and Jobs Are Biggest Problems 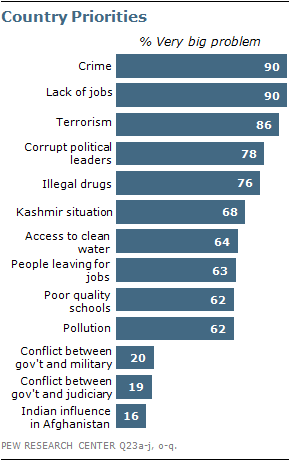 Crime and a lack of jobs top the list of national concerns, with nine-in-ten citing these issues as very big problems for Pakistan. A close third is the issue of terrorism (86%). In addition, roughly three-quarters of Pakistanis are very concerned about corrupt political leaders (78%) and illegal drugs (76%).

About seven-in-ten (68%) say the situation in Kashmir is a very big problem. Meanwhile, roughly six-in-ten Pakistanis are worried about access to clean water and pollution. Similarly, 63% say people leaving the country for jobs is a major concern and 62% say the same about poor quality schools.

Despite the antagonistic relations between the Pakistani government and both the military and the judiciary, few are concerned about the rift between these national institutions.3 Just two-in-ten say these conflicts are a very big problem for the country. More than four-in-ten (45%) have no opinion.

At the bottom of the list of country problems is the influence of India in Afghanistan. Just 16% of Pakistanis are very concerned about this issue, with 45% offering no opinion.

Next: Chapter 5. Institutions and Leaders
← Prev Page
Page1Page2Page3Page4You are reading page5Page6Page7
Next Page →