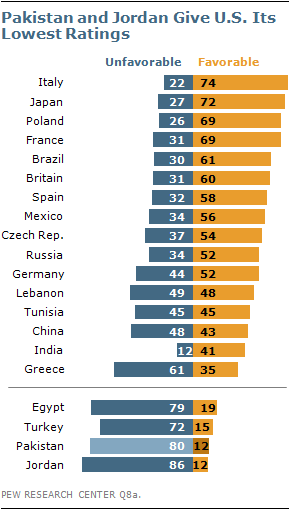 Pakistanis continue to have overwhelmingly negative attitudes toward the United States. Eight-in-ten currently express an unfavorable view of the U.S. Among the 21 nations included in the spring 2012 Pew Global Attitudes survey, only Jordanians offer more negative ratings.

Similarly, President Obama gets poor marks from Pakistanis – only 7% have confidence in him to do the right thing in world affairs. And key aspects of American foreign policy are widely unpopular. Most believe the U.S. acts unilaterally on the world stage, and there is widespread opposition to American anti-terrorism efforts.

A 74%-majority of Pakistanis see the U.S. as an enemy, and most think U.S.-Pakistani relations have failed to improve over the last few years. Moreover, for a growing number of Pakistanis, enhancing the relationship between the two countries is not an important priority.

Pakistanis express mixed views about American involvement in the fight against extremist groups. On balance, there is support for American financial and humanitarian aid to areas where these groups operate, as well as for U.S. intelligence and logistical assistance to the Pakistani military. Support for both, however, has declined in recent years. And few back American drone strikes.

Over the last decade, the U.S. has provided billions of dollars in aid to Pakistan in an effort to increase bilateral cooperation and improve its image. But these policies are not seen in a positive light by Pakistanis – many say that both American military and economic assistance are having a negative effect on the country.

Fully 80% of Pakistanis have a negative opinion of the U.S., up seven percentage points from last year. This view has become more common over the course of the Obama era. In 2008, during President George W. Bush’s last year in office, 63% expressed a negative view of the U.S.

Throughout Obama’s presidency, few Pakistanis have held a positive view of the American leader. Today, six-in-ten say they have little or no confidence in him, down slightly from last year, but up from the 51% registered in 2009. Obama’s ratings are very similar to those received by President Bush in 2008, when 61% expressed a lack of confidence in the former president.

Pakistanis continue to believe the U.S. acts unilaterally in world affairs. Almost two-thirds (65%) do not think the U.S. considers the interests of countries like Pakistan when it is making foreign policy decisions.

Although this has been the prevailing view among Pakistanis for a decade, the percentage who say the U.S. does not consider their interests is up nine points since last year, and is now higher than at any point since Pew began asking this question in 2002.

American anti-terrorism efforts have also been consistently unpopular in Pakistan over the last decade. In the current poll, 61% say they oppose U.S.-led efforts to combat terrorism, essentially unchanged from 62% last year.

Most Say U.S. an Enemy 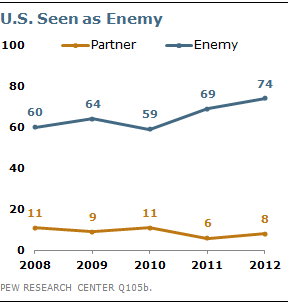 Nearly three-in four Pakistanis (74%) consider the U.S. an enemy to their country, while just 8% say it is a partner. One-in-ten believe the U.S. is neither a partner nor an enemy, and 8% offer no opinion.

The percentage describing the U.S. as an enemy has grown steadily since 2010 and is currently at its highest point since 2008.

Those who live in the Punjab province are especially likely to think of the U.S. as an enemy (85%).

Pakistani views about their relationship with China are quite different. Nine-in-ten Pakistanis consider China a partner, while just 2% say it is more of an enemy. 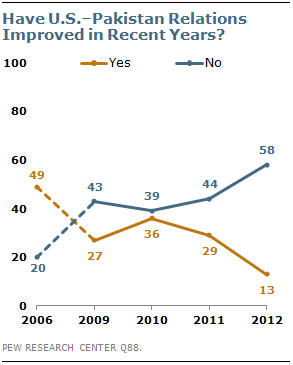 A shrinking minority of Pakistanis believe relations between their country and the U.S. are improving. Only 13% say the bilateral relationship has improved in recent years, while 58% disagree.

Assessments of U.S.-Pakistani relations have grown more negative over the last year, and have become considerably more negative since 2010, when the Pakistani public was almost evenly divided on this question. At that point, 36% said relations had improved and 39% said they had not. 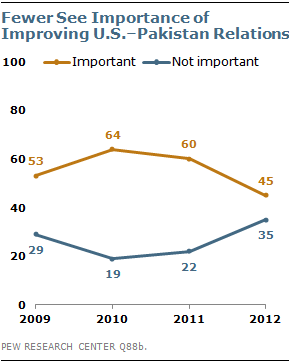 Those who identify with the Tehreek-e-Insaf party – led by government critic Imran Khan – are particularly likely to say relations have not improved: 78% hold this view.

Overall, the goal of improving U.S-Pakistani relations is becoming less important to Pakistanis. Less than half (45%) say enhancing the relationship is important, down from 60% last year and 64% in 2010.

There is some support for cooperation between the U.S. and Pakistan in the fight against extremists. Half want the U.S. to provide financial and humanitarian aid to areas where extremist groups operate, while just one-in-five oppose this idea. Still, support has dropped significantly since 2009, when 72% favored these efforts. 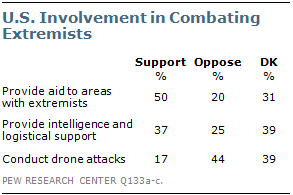 Meanwhile, 37% support the U.S. providing intelligence and logistical assistance to Pakistani troops fighting these groups, while 25% are opposed. Again, support has declined since 2009, when 63% were in favor.

American drone attacks have been consistently unpopular, even if the attacks are coordinated with Pakistani authorities. Only 17% favor the U.S. conducting drone strikes in conjunction with the Pakistani government against leaders of extremist organizations, little changed from 23% in 2010, the first year the question was asked.

Supporters of the Tehreek-e-Insaf party are especially likely to express opposition to American aid and U.S. intelligence and logistical support.

Just over half of Pakistanis (55%) say they have heard a lot or a little about drone attacks that target leaders of extremist groups. Awareness is considerably higher in the Khyber Pakhtunkhwa province (87%), which borders the semi-autonomous Federally Administered Tribal Areas (FATA) in northwest Pakistan where most drone attacks have taken place.

Among those who have heard a lot or a little, nearly all (97%) consider them a bad thing. Roughly seven-in-ten (69%) believe the U.S. government is conducting these strikes, while another 18% volunteer that they believe both the U.S. and Pakistan are responsible. 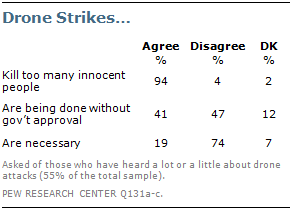 Those who are familiar with the drone campaign also overwhelmingly believe the attacks kill too many innocent people (94%). Nearly three-quarters (74%) say they are not necessary to defend Pakistan from extremist organizations.

Meanwhile, those who have heard about the strikes are somewhat divided over whether they are being done with or without approval from the Pakistani government.

Both forms of assistance are held in especially low regard by supporters of the Tehreek-e-Insaf party – 59% see U.S. economic aid negatively, and 61% believe American military assistance is having a detrimental impact on Pakistan.

There is no consensus in Pakistan about whether American assistance is largely military or largely designed to help Pakistan develop economically: 18% say it is mostly military; 17% believe it is mostly economic; 22% think it is both equally; and 43% do not know.

Next: Chapter 2. Attitudes Toward Extremism
← Prev Page
Page1You are reading page2Page3Page4Page5Page6Page7
Next Page →