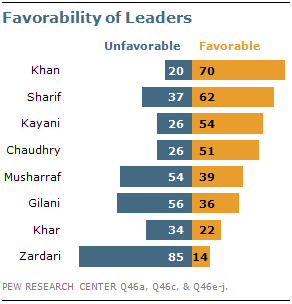 Despite a number of high-profile conflicts over the past year between the elected government, the military and the courts, Pakistanis’ opinions about these national institutions have remained relatively stable. The military and the court system continue to be seen as having a positive influence on the country, while the government receives overwhelmingly negative reviews. Other positive influences are the media and religious leaders, while the police have a dismal image.

Khan and Sharif Get Positive Reviews

Among the top political rivals included in the survey, the two major opposition leaders, Imran Khan and Nawaz Sharif, are still the most popular. Seven-in-ten give Khan positive reviews. Favorable ratings of the PTI leader have increased by 18 percentage points over the past two years. While Khan is popular among all age groups, Pakistanis age 18-29 (76%) are more favorable than those age 50 and older (63%). 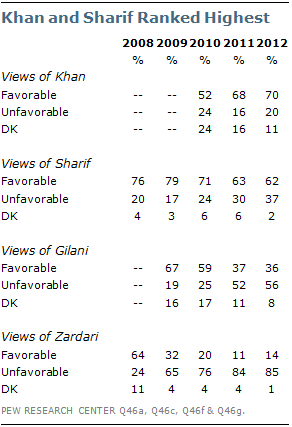 As Khan has become increasingly popular, attitudes also appear to have shifted in favor of his political party. Just three years ago, less than 1% of Pakistanis identified with the PTI while 30% named the Pakistan Muslim League-Nawaz (PML-N) and 25% the Pakistan People’s Party (PPP). Today, 14% identify with the PTI, the same percentage that names the PPP and only slightly less than the 19% that now identify with the PML-N. Young people are more likely to align with the PTI – 17% of 18-29 year olds compared with 8% of those age 50 or older.

Sharif, the leader of PML-N, is well-liked by 62% of Pakistanis. While still popular, Sharif’s reviews have slipped somewhat since 2008.

President Asif Ali Zardari, leader of the ruling PPP, continues to be very unpopular. Just 14% give him positive reviews, and more than eight-in-ten are negative. Zardari’s ratings have always been lower than Sharif’s, even in 2008, when Zardari ascended to office. While more than half (54%) of PPP supporters are favorable toward Zadari, a substantial minority is unfavorable (45%).

Former Prime Minister Gilani is viewed favorably by only 36% of Pakistanis. Gilani’s ratings dropped considerably in 2011, particularly after the U.S. raid that killed Osama bin Laden. 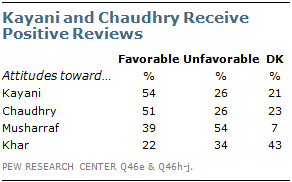 More than half (54%) of Pakistanis give him positive reviews, while the remainder are either unfavorable (26%) or unfamiliar (21%) with the army chief.

Similarly, Chief Justice Iftikhar Muhammad Chaudhry receives positive ratings from roughly half of the Pakistani public. About a quarter feel negatively toward him. Ratings of both Kayani and Chaudhry are unchanged since last year, but have slipped since 2010.

Pervez Musharraf, the former president who is under investigation for alleged involvement in the 2007 assassination of Benazir Bhutto, receives negative ratings. More than half are unfavorable, while roughly four-in-ten are favorable.

Attitudes toward Hina Ribbani Khar, the first woman to hold the position of Foreign Minister, are on balance negative. However, fully 43% of Pakistanis are unfamiliar with her. 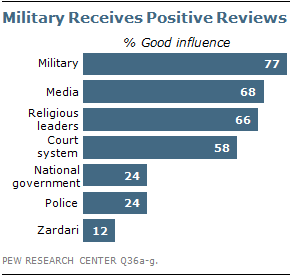 The military remains the most highly rated institution in Pakistan – 77% say it has a good influence on the country, nearly the same percentage (79%) as last year. However, the military’s ratings have slipped somewhat from a high of 86% in 2009.

Large majorities also rate the influence of the media (68%) and religious leaders (66%) as good. In the past year, however, positive reviews of the media have declined eight percentage points.

Roughly six-in-ten give the court system high marks. The courts’ ratings have been relatively constant over the years, except for a dip in positive reviews in 2011.

As has been true in past surveys, few (24%) say the police are a good influence. Ratings of the national government are also very low – just 24% of Pakistanis believe it plays a positive role in the country.

President Zardari receives even more negative reviews. Only 12% believe he has a good influence, while 84% say it is bad. Pakistanis who identify with Zardari’s party, PPP, are more likely to give him high marks, though they are still divided – 44% say his influence is good, 48% say it is bad. Attitudes about Zardari are particularly negative in Punjab (96% bad influence) and Khyber Pakhtunkhwa (95%).