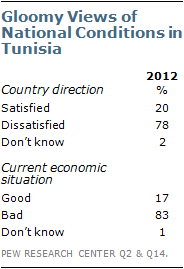 Tunisians are broadly disappointed with the current state of their nation. Most are dissatisfied with the country’s direction and the economy, and the public is divided over whether things are better off now that Zine el-Abidine Ben Ali is out of office.

Nonetheless, most Tunisians are also optimistic about their country’s future and the economy. They prioritize having a democratic government rather than a stable, non-democratic one. And they say it is very important to establish key features of democracy – such as a fair judiciary, honest elections and free speech.

Regarding the role of religion in government, Tunisians are more likely to look towards Turkey as a role model, rather than Saudi Arabia.

Dismal Conditions, but Optimistic About Future 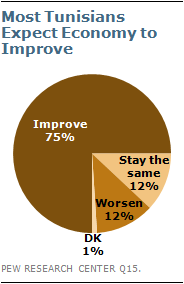 A broad majority (78%) of Tunisians are dissatisfied with the direction of their country. Just two-in-ten are satisfied. Similarly, roughly eight-in-ten (83%) say current economic conditions are bad, while only 17% think the economy is
doing well.

Despite deep concern about the state of the nation, there is widespread optimism. Almost two-thirds (66%) are hopeful about the future of the country, while just 27% are pessimistic. In addition, three-quarters believe the economy will get better over the next twelve months, while 12% say it will stay about the same and 12% expect conditions to worsen.

Supporters of the ruling Ennahda party are particularly optimistic about the nation’s future (76%) and the economy (82%). 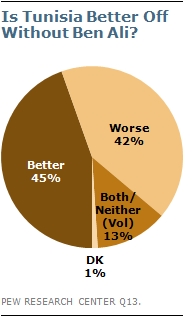 Tunisians are almost evenly divided on whether their country is better off now that Zine el-Abidine Ben Ali is no longer in power. Almost half (45%) say things are better, but a similar percentage (42%) believes the country is worse off.

Ennahda supporters are more likely to believe things are better off (56%) with Ben Ali out of office.

Democracy Is a Priority, but So Is Economy 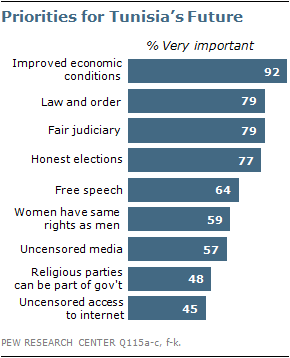 In addition, respondents name key democratic principles as top priorities for Tunisia’s future. Roughly eight-in-ten say it is very important for the country that the judicial system treats everyone the same (79%) and that there are honest elections with a choice of at least two political parties (77%).

Majorities also cite the freedom to openly criticize the government (64%) and having a media that can report news without government censorship (57%) as top priorities. Another key concern for the future is that women have the same rights as men (59%).

While democratic principles are high priorities, so are the economy and security. Improving the economy ranks as the most important priority (92%). And nearly eight-in-ten (79%) say that it is very important to maintain law and order.

Much lower priorities are: ensuring that religious parties can be part of the government (48%) and being able to access the internet without government censorship (45%).

There are few demographic differences in priorities for the country. However, women (67%) are more likely than men (50%) to say equal rights for women is very important.

Turkey Is Model for Religion in Politics 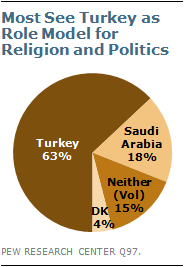 When asked which is a better model for the role of religion in Tunisia’s government – Turkey or Saudi Arabia – a majority names the more secular Turkey as the ideal, while just 18% choose Saudi Arabia. Another 15% volunteer that neither model is appropriate.

Young people and the highly educated are especially likely to name Turkey as the preferred model. Two-thirds of 18-to-29 year-olds choose Turkey, compared with 53% of those age 50 and older. Nearly seven-in-ten college graduates (69%) say the same, but just half (51%) of those with a primary education or less do so.

The Future for Women 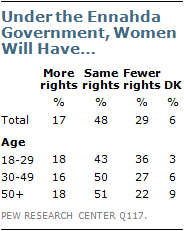 Young people are especially likely to believe the Ennahda-led government will give women fewer rights. More than a third (36%) of 18-to-29 year-olds say women will lose rights, while just 22% of those age 50 and older believe the same. There is no significant difference between men and women on this question.

Most Muslims Want Democracy, Personal Freedoms, and Islam in Political Life Chapter 1. Public Mood After the Arab Spring Chapter 2. Views of Democracy Chapter 3. Role of Islam in Politics Chapter 4. Gender Equality Chapter 5. Views of Extremism
Chapter 6. Tunisia: National Conditions and Views of the Future
Dismal Conditions, but Optimistic About FutureMixed Reviews of Post-Ben Ali EraDemocracy Is a Priority, but So Is EconomyTurkey Is Model for Religion in PoliticsThe Future for Women
Chapter 7. Tunisia: Views of Key Leaders, Parties and Institutions Chapter 8. Tunisia’s Relationship With the U.S. Survey Methods