Tunisians are generally divided on their views of the United States. Overall, they are split evenly between those with a favorable view of the U.S. (45%) and those with an unfavorable view (45%). About as many say that the U.S. response to the political situation in Tunisia had a positive impact as say it was negative. And when asked about the future relationship with the U.S., about a third of Tunisians say it should stay the same, another third believes it should be closer, and a quarter thinks it should be less close.

In the context of the broader Muslim world, Tunisians’ attitudes toward the U.S. are relatively positive. Among the six largely Muslim nations polled, Lebanese and Tunisians give the U.S. its highest marks. Elsewhere views are much dimmer, with less than two-in-ten in Egypt, Turkey, Pakistan, and Jordan having a positive view. 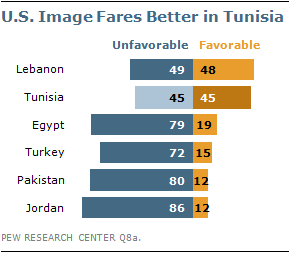 Younger Tunisians are especially favorable towards the U.S., with 53% of 18-to-29 year-olds expressing a positive opinion.

When asked about the U.S. response to the political situation in their country, Tunisians have mixed views. Roughly three-in-ten (31%) say the U.S. had a positive impact, while 27% say it was negative, and a quarter volunteers that the U.S. made no difference.

In general, views of the U.S. response to the political situation are consistent across demographic groups in Tunisia, but thoughts on the future relationship varies. Men, young people, those with high incomes, and Muslims who pray less than five times per day all are more likely to say Tunisia’s relationship to the U.S. should be closer. In contrast, in Egypt older people and Muslims who pray five times a day are more likely to want a closer relationship with the U.S. 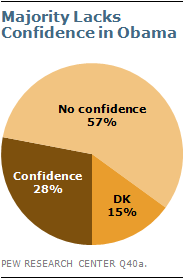 Tunisian opinions of U.S. President Barack Obama are lower than general U.S. favorability. Roughly three-in-ten (28%) have a lot or some confidence in Obama’s ability to handle international affairs, while a 57%-majority has little or no confidence in his leadership abilities. This view is in line with those of the other predominantly Muslim nations polled in spring 2012, including Egypt, where about seven-in-ten (69%) say they do not have confidence in the U.S. president. (For more on views of Obama, see “Global Opinion of Obama Slips, International Policies Faulted,” released June 13, 2012).