Tunisians hold positive opinions of their current leadership, their ruling political party, and their military. Prime Minister Hamadi Jebali, Ennahda co-founder Rached Ghannouchi, and current President of the Constituent Assembly Mustapha Ben Jaafar all have majority support from the Tunisian people. The leading coalition party in the Assembly, the moderate Islamist group Ennahda, also garners a positive majority. At the same time, the military is the most trusted institution in Tunisia, with near unanimous praise for its effect on the country. 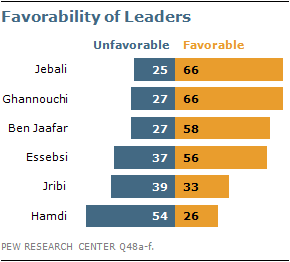 Maya Jribi, leader of the centrist Republican Party is less popular, with only a third of Tunisians viewing her favorably, 39% expressing an unfavorable view and 28% offering no opinion.5

Hachmi Hamdi, a journalist and the leader of Aridha Chaabia (i.e. Popular Petition Party), is the least-popular politician tested. Only 26% see him favorably, while over half (54%) have an unfavorable view of the politician who many believe has close ties to ousted former President Zine el-Abidine Ben Ali. 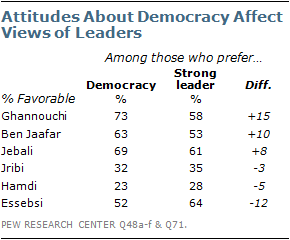 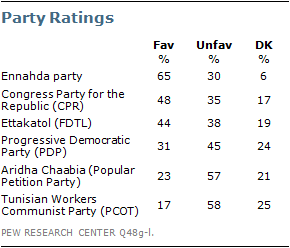 The ruling moderate Islamist party Ennahda receives strong support from the Tunisian people. Nearly two-thirds (65%) have a favorable view of the Assembly’s leading party, while only three-in-ten have an unfavorable view.

Ennahda’s more secular coalition partners, Congress Party for the Republic (CPR) and Ettakatol (FDTL), garner notably less support – 48% and 44% of Tunisians have favorable views of these parties, respectively. However, more educated Tunisians have a sunnier view. For example, 57% of Tunisians with a college degree have a favorable view of Ettakatol, while only 38% with primary schooling or less feel the same.

Tunisians have more negative views of other major parties in the assembly. The Progressive Democratic Party (PDP), which recently merged with other centrist parties to form the Republican Party, is seen favorably by only 31% of Tunisians and unfavorably by 45%.

Meanwhile, majorities have a negative view of Aridha Chaabia, a populist leaning party, and the Tunisian Workers Communist Party (PCOT). Only about one-in-five Tunisians have a favorable view of either Aridha Chaabia (23%) or PCOT (17%). 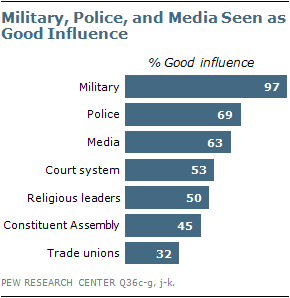 The military is far and away the most popular of the leading institutions tested in Tunisia, with 97% saying it is a good influence on the way things are going and almost three-quarters (72%) saying it is a very good influence. Majorities also see the police and media positively (69% and 63% respectively).

On balance, Tunisians say the court system (53%) and religious leaders (50%) are a good influence on the country, but opinions about the Constituent Assembly (NCA), which is charged with writing Tunisia’s new constitution, are more divided. An almost equal number of Tunisians say the Assembly is a positive influence (45%) as say it is negative (47%). Meanwhile, trade unions are seen negatively – only 32% say they are a good influence on the country and half say they are a bad influence.

Generally, lower income and less educated Tunisians have a higher opinion of the police, the media, the court system and religious leaders than their better educated and wealthier compatriots. For example, nearly seven-in-ten (69%) Tunisians with a primary education or less think the media is a good influence on the way things are going, while only half with a college degree agree. And while two-thirds of low-income Tunisians see the media positively, only 52% of high-income earners agree.6

Next: Chapter 8. Tunisia’s Relationship With the U.S.
← Prev Page
Page1Page2Page3Page4Page5Page6Page7You are reading page8Page9Page10
Next Page →