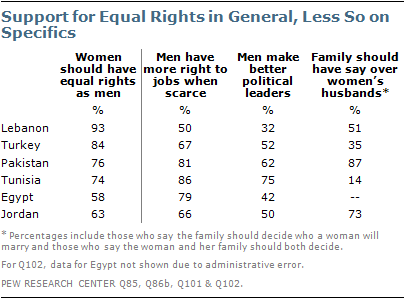 In the largely Muslim nations polled, there is broad support for gender equality in principle, but attitudes on women’s role in the economy, politics, and their private lives suggests significant ambivalence about equality between men and women.

For instance, while solid majorities support the idea of women’s employment, majorities also believe that men have more of a right to jobs when unemployment is high. Half or more in four of the countries say men make better political leaders than women. And in three of five nations, half or more believe women’s families should have a say over who they marry.

Support for Principle of Equality 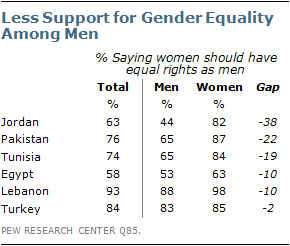 Broad majorities endorse equality between men and women. More than eight-in-ten in Lebanon and Turkey express support for equal rights, along with roughly three-quarters in Pakistan and Tunisia. Support is lower in Jordan and Egypt, although about six-in-ten still say there should be equality between the sexes.

Women are considerably more supportive of equal rights than men. With the exception of Turkey, where no gender differences emerge, there is at least a 10 percentage point gap between the sexes on this issue. For example, in Jordan, 82% of women support equality compared with just 44% of men. Similarly large differences are found in Pakistan (87% vs. 65%) and Tunisia (84% vs. 65%).

Support for Women’s Employment, but Men Have Priority 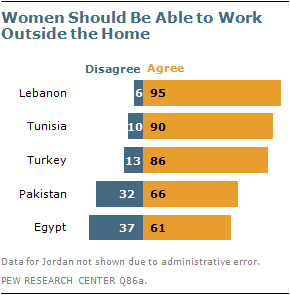 Solid majorities embrace the idea of women working outside the home, including more than eight-in-ten in Lebanon, Tunisia and Turkey.

Support is somewhat lower in Pakistan and Egypt. Still, at least six-in-ten in each country believe women should be able to work outside the home.

Pakistani views on this issue are divided sharply along gender lines; 88% of women support women’s employment, while just 46% of men agree. 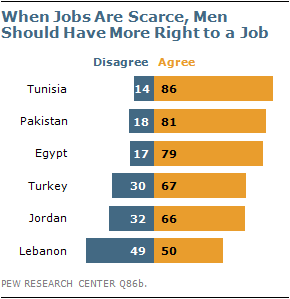 Despite embracing the idea of women working outside the home, many believe that men should be first in line when employment is scarce. Roughly eight-in-ten or more in Tunisia, Pakistan and Egypt agree that men have a greater right to jobs when unemployment is high. Two-thirds in Turkey and Jordan say the same. In Lebanon, the public is divided on this question.

Men are generally more likely than women to agree that scarce jobs should go first to men, although majorities of women in five countries share this view. The gender gap is most pronounced in Jordan (+21 percentage points) and Pakistan (+20). A double-digit gap is also evident in Lebanon (+12). 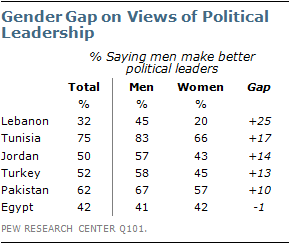 When it comes to political office, many believe men are better suited for the job. Half or more in Tunisia, Pakistan, Turkey and Jordan say men make better political leaders.

In Egypt, the public is divided on this question: 42% say men are better, while 39% think women are equally capable; 16% say women make better leaders. Lebanon is the only country where more than half (54%) believe that men and women are equals in the political arena.

Men are much more likely than women to say that men make better political leaders, while women are more likely than men to say that both sexes are equal. For example, in Lebanon, 45% of men choose men as better suited for politics while just 20% of women do so. The gender gap is also high in Tunisia (+17 percentage points), Jordan (+14), Turkey (+13) and Pakistan (+10). There is no difference between men and women in Egypt on this issue.

In most of the countries surveyed in both 2007 and 2012, there has been little change in opinions on this topic. Turks, however, are much more likely now to say men are better political leaders than they were in 2007 (52% vs. 34%); five years ago, 51% said men and women were equally effective in politics. More religious Turkish Muslims are especially likely to see men as better political leaders – 65% of those who pray five times a day share this view, compared with 48% of those who pray less frequently. In addition, those who are supporters of the AKP, the ruling party headed by Prime Minister Recep Tayyip Erdogan, are more likely than those who support the more secular CHP party to believe men are more effective (62% vs. 40%, respectively).

Should Women Choose Their Own Husbands? 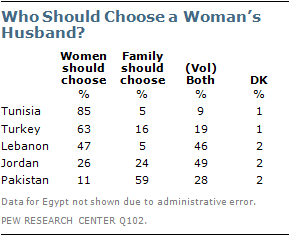 Attitudes are mixed on whether women should be the primary decision-makers in choosing their partners. Broad majorities in Tunisia and Turkey believe that a woman, rather than her family, should choose her husband.

In Lebanon, the public is divided: almost half (47%) say women should be able to pick their future partners, while a roughly equal percentage (46%) believe women and their families should both participate in the decision.

Unlike other measures of gender equality in the survey, there tend to be only minor differences between men and women on the topic of choosing a husband. The exception is Jordan, where 35% of women believe they should choose while just 17% of men say the same.

While there are few gender differences in Lebanon and Turkey on this topic, an age gap emerges there. Six-in-ten of those ages 18-to-29 in Lebanon believe a woman should choose her own husband, compared with 50% of those ages 30-to-49 and just 30% of people 50 and older. In Turkey, 70% of the youngest group say women should choose, while 65% in the middle group and 56% in the oldest group share this view. 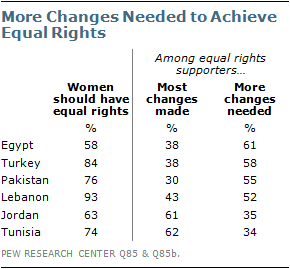 Of those who support gender equality, many believe more changes need to be made in order to achieve parity between men and women in their country. Roughly six-in-ten of those in Egypt and Turkey who say women should have the same rights as men believe not enough has been done to achieve such equality. More than half of equal rights supporters in Pakistan and Lebanon say the same about their own country. In Jordan and Tunisia, on the other hand, about six-in-ten equal rights supporters are largely content with their nations’ advances toward equality. 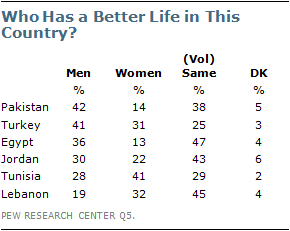 Opinions about who has a better life – men or women – are mixed across the six countries surveyed. Pluralities in Egypt, Jordan and Lebanon say that men and women are equally well off. Turkey is the only country where a plurality says men are doing better, while Tunisia is the only nation where a plurality thinks women are better off. The Pakistani public is divided between those who say men are better off (42%) and those who think life is the same for men and women in their country (38%). 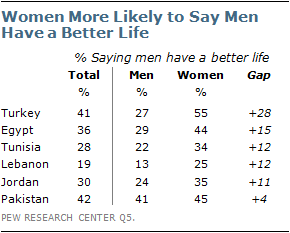 Women are generally more likely to believe that men have an easier life. For example, in Turkey, 55% of women say men have a better life, while just 27% of men agree. Gender gaps of 10 percentage points or more also exist in Egypt, Tunisia, Lebanon and Jordan.

Next: Chapter 5. Views of Extremism
← Prev Page
Page1Page2Page3Page4You are reading page5Page6Page7Page8Page9Page10
Next Page →