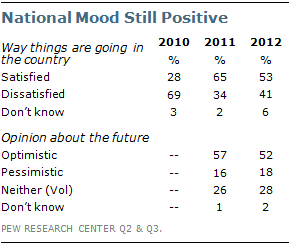 Despite economic difficulties and political uncertainty, Egyptians remain upbeat about the course of the nation and prospects for progress. Amid rancorous debates over the presidential election and the shape of a new constitution, most Egyptians continue to want democracy, with two-in-three saying it is the best form of government.

Egyptians also want Islam to play a major role in society, and most believe the Quran should shape the country’s laws, although a growing minority expresses reservations about the increasing influence of Islam in politics. When asked which country is the better model for the role of religion in government, Turkey or Saudi Arabia, 61% say the latter. However, most also endorse specific democratic rights and institutions that do not exist in Saudi Arabia, such as free speech, a free press, and equal rights for women. 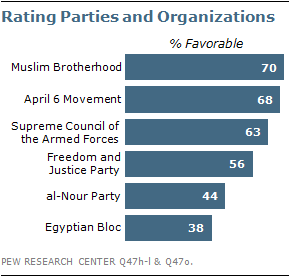 Seven-in-ten Egyptians express a favorable view of the Muslim Brotherhood, down just slightly from 75% a year ago. Most (56%) also have a positive opinion of the Brotherhood-affiliated Freedom and Justice Party (FJP), the largest party in the newly elected parliament. The more conservative al-Nour fares less well: 44% have a favorable and 44% an unfavorable view of the Salafist party. Hazem Salah Abu Ismail, a Salafist leader who was recently disqualified as a presidential candidate, gets somewhat better ratings (52% positive, 42% negative).

The April 6th Movement, a loose organization of mostly young and secular activists that played a key role in the demonstrations that forced Hosni Mubarak from office, is rated favorably by 68% of Egyptians. However, the Egyptian Bloc, a mostly secular coalition of political parties, is not popular – just 38% assign it a positive rating.

While many have criticized the military in recent months for its handling of the post-Mubarak transition, it continues to be largely well-regarded. Three-in-four Egyptians believe the military is having a good influence on the country, and 63% hold a positive opinion of the ruling Supreme Council of Armed Forces (SCAF). And while favorable ratings for SCAF Chairman Mohamed Tantawi have declined significantly from last year’s 90%, they remain high at 63%. 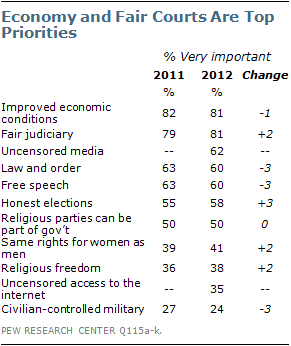 Most Egyptians support civilian control of the military, but other key institutional features of democracy are considered higher priorities. Roughly six-in-ten (62%) say civilian control is an important priority, but only 24% consider it very important, essentially unchanged from 27% in 2011. In contrast, 81% believe a fair judiciary is very important, similar to last year’s 82%. Views toward other key democratic rights and institutions also show little change since last year.

These are among the principal findings from a nationwide survey of Egypt by the Pew Research Center’s Global Attitudes Project. Face-to-face interviews were conducted with 1,000 adults in Egypt between March 19 and April 10, 2012. The poll finds little change in Egyptian perceptions of the United States. Only 19% offer a positive rating of the U.S. and just 29% express confidence in President Obama. The survey also finds ongoing opposition to the peace treaty between Egypt and Israel: 61% prefer to annul the treaty, up from 54% a year ago.

Desire for Democracy, But Also Order and Growth 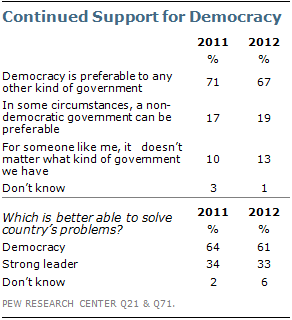 Egyptians continue to voice confidence in democracy. Two-thirds consider it preferable to any other kind of government, while just 19% say in some circumstances a non-democratic form of government may be best, and just 13% believe it doesn’t really matter what kind of government rules the country. Roughly six-in-ten (61%) think democracy is best-suited for solving the country’s problems, while only 33% say a leader with a strong hand would be better equipped for dealing with these challenges.

At the same time, it is clear that Egyptians also want law and order: six-in-ten consider this a very important priority. And the economy remains a major concern. About eight-in-ten (81%) say improving economic conditions should be a top priority. Just 27% describe the country’s economic situation as good, down from 34% in 2011. Still, on balance, Egyptians remain optimistic about their economic future: 50% expect the economy to improve over the next 12 months, only 20% think it will worsen, and 28% believe it will stay about the same.

A growing number of Egyptians sees Islam as playing a major role in the political life of the country – 66% currently compared with 47% in 2010. For the most part, those who believe Islam is playing a large role see this as good for the country, but more disagree with that view this year than last. Conflicting views about the role of religion in politics are also seen in the significant numbers who say Saudi Arabia is the best model for Egypt, yet endorse key features of democracy. Among those who choose Saudi Arabia over Turkey as the best model for Egypt, two-thirds also say democracy is preferable to any other kind of government. More than six-in-ten say it is very important to live in a country with a free press (64%), honest multiparty elections (63%), and freedom of speech (61%).

America’s image remains overwhelmingly negative – only 19% offer a favorable opinion of the U.S., basically unchanged from 20% in 2011. But a large majority does not see the U.S. as having a major influence on political developments in Egypt. 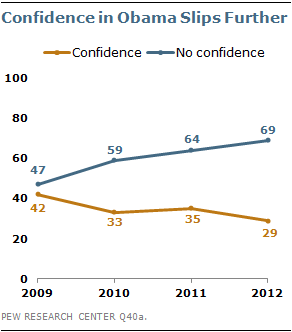 Egyptian opinions about President Obama have grown steadily more negative over the course of his presidency. In a 2009 poll conducted a few months after he took office, Egyptians were divided over the new American president: 42% expressed a great deal or some confidence that he would do the right thing in world affairs; 47% said they had little or no confidence.1 Today, 29% have confidence in Obama, while 69% lack confidence.

Although the U.S. has sent billions of dollars in aid to Egypt over the last few decades, few believe it is helping the country. Indeed, roughly six-in-ten say both American military and economic aid are having a mostly negative impact on Egypt.

Despite these negative sentiments, a majority of Egyptians says either they want the U.S.-Egypt relationship to stay about as close as it has been in recent years (35%) or become even closer (20%), while 38% would like to see relations become less close. 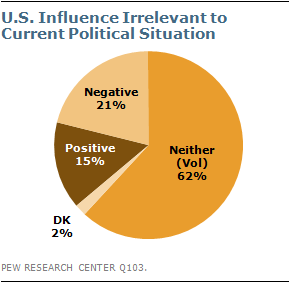 Overall, Egyptians believe the U.S. exerts a limited influence on their country’s tumultuous politics. When asked whether the American response to Egypt’s political situation is having a positive or negative impact, 62% say it is having neither.

Moreover, few believe there is a hidden Western hand behind the country’s ongoing protests. Just 21% say the demonstrations are a result of Western efforts to destabilize Egypt, while 74% think the protests reflect genuine Egyptian discontent with the country’s political situation.

Next: Chapter 1. National Conditions and Views About the Future
← Prev Page
You are reading page1Page2Page3Page4Page5Page6Page7
Next Page →