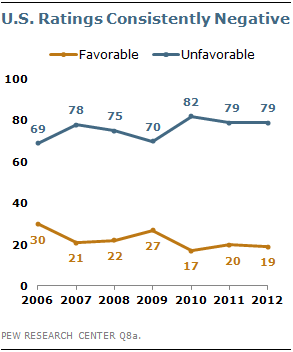 Opinions of the U.S. and President Obama continue to be overwhelmingly unfavorable. Even American financial assistance is viewed negatively: about six-in-ten Egyptians say both U.S. military and economic aid is having a detrimental impact on their country.

Despite these decidedly negative attitudes, most Egyptians want their country’s relationship with the U.S. to stay about as close as it is currently or become even closer. About four-in-ten (38%) would like to see a more distant relationship between the two countries.

While the conflict over American NGOs’ democracy-promotion efforts in Egypt severely strained bilateral relations with the U.S., few Egyptians believe that Western powers are behind the country’s ongoing protests.

Poor Ratings for the U.S. and Obama

The tremendous political changes that have taken place in Egypt since the end of the Mubarak era have not led to a major shift in perceptions of the U.S. Roughly eight-in-ten Egyptians (79%) express unfavorable attitudes toward the U.S., with just 19% saying favorable. This is essentially unchanged from 2011, when 79% were unfavorable and 20% were favorable. 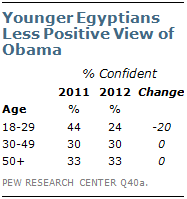 President Obama also receives low marks from most Egyptians. About seven-in-ten (69%) say they do not have confidence in him to do the right thing in world affairs; just 29% have a lot or some confidence in his actions. There has been a steady decrease in confidence in Obama since 2009, when Egyptian opinions about the new American leader were nearly split, with 42% expressing confidence and 47% saying not much or none at all.

Views toward President Obama have become considerably more negative over the last year among younger Egyptians. In 2011, 44% of 18-29 year-olds had a lot or some confidence in President Obama. Today, just 24% say the same. Attitudes toward the U.S. leader have remained constant among other age groups since 2011. 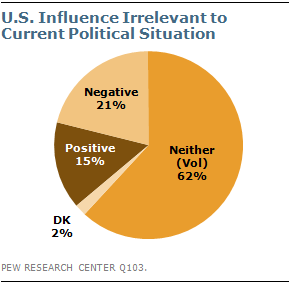 Most Egyptians (62%) believe the U.S. has had neither a good nor bad influence on the political situation in their country. Roughly one-in-five (21%) say the impact is negative, while 15% believe it is positive.

Despite some claims that American NGO’s were trying to stir up discontent, only 21% of Egyptians say recent protests are due to attempts by Western powers to destabilize the country. Instead, a broad majority (74%) believes they are the result of genuine Egyptian dissatisfaction with the current political situation. 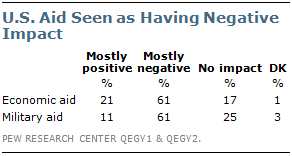 There is no consensus among Egyptians as to whether American financial assistance to their country is primarily economic or military. A plurality (34%) believes the aid is mostly to help Egypt develop economically, while 23% say the aid is mostly military. Nearly three-in-ten (28%) believe it is divided equally between economic and military assistance, and 14% offer no opinion.

Both types of American aid are viewed negatively by Egyptians. About six-in-ten (61%) say U.S. military aid has a harmful influence on Egypt, while just 11% believe its impact is positive, and 25% say it has no impact. Similarly, 61% consider U.S. economic aid harmful, while the remainder of the public is split between positive views (21%) and the belief that the aid has no impact (17%).

Still, Less Than Half Want a More Distant Relationship 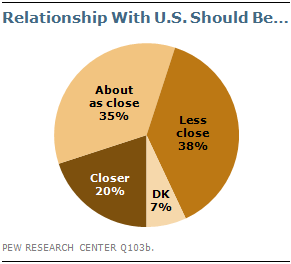 Attitudes toward the bilateral relationship are strongly related to views about American aid. Those who believe economic and military aid have a harmful impact on Egypt are significantly more likely to say they prefer a more distant relationship. For example, among those who say economic aid has a negative impact, 51% want a less close relationship with the U.S., compared with 19% of those who think economic assistance is having a positive impact. 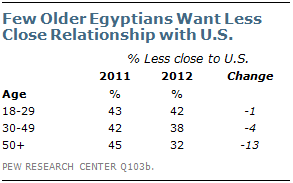 Over the last year, Egyptians age 50 and older have become less negative about their country’s future relationship with the U.S. In 2011, 45% of the older age group wanted a less close relationship, compared with 32% today. There has been no significant change on this question among Egyptians under 50. 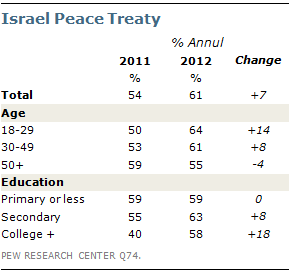 Most Egyptians favor overturning the 1979 peace treaty in which Egypt became the first Arab country to formally recognize Israel. Roughly six-in-ten (61%) want to annul the treaty, up slightly from last year (54%). Just under a third (32%) want to maintain it.

Egyptians Remain Optimistic, Embrace Democracy and Religion in Political Life Chapter 1. National Conditions and Views About the Future Chapter 2. Key Leaders, Groups and Institutions Chapter 3. Attitudes Toward Democracy Chapter 4. Role of Islam in Politics
Chapter 5. Views of the United States and Israel
Poor Ratings for the U.S. and ObamaNegligible Impact of U.S. on Political SituationLittle Support for U.S. AidStill, Less Than Half Want a More Distant RelationshipTreaty With Israel
Survey Methods