The Egyptian national mood improved dramatically following the February 2011 resignation of Hosni Mubarak, and today Egyptians remain generally positive about their country’s path and its future prospects. Still, less than half say things have actually gotten better for Egyptians since Mubarak left office, and few describe the current economic situation as good. Moreover, lower-income Egyptians are decidedly less upbeat about current conditions in the country, as well as its future direction.

The survey finds little consensus regarding what the future may hold for women and religious minorities under a government led by the Muslim Brotherhood’s Freedom and Justice Party (FJP). A 40%-plurality says women will have more rights, while a similar percentage say religious minorities will have fewer rights. 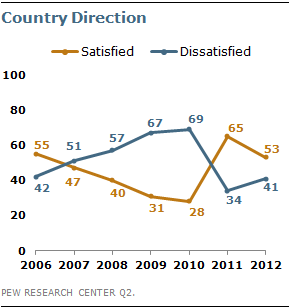 On balance, Egyptians believe the country is currently headed in the right direction, with 53% saying they are satisfied with the way things are going in the country, down from 65% in 2011, but still considerably higher than in the final years of the Mubarak era.

Low-income Egyptians are more downbeat about the state of the nation. Only 42% of those with a low household income are satisfied with the country’s direction, compared with 64% of those in the high- income category and 60% of middle-income respondents.2 Last year, low-, middle-, and high-income Egyptians were about equally satisfied with the way things were going in the country.

Views about the country’s direction are also related to education. Roughly two-thirds of college graduates (66%) are satisfied with the way things are going, compared with 53% of those with a secondary education and 46% of Egyptians with a primary education or
less.

Optimism is especially common among wealthier Egyptians. Nearly two-thirds (65%) of those with high incomes are positive about the future, compared with 51% of middle- and 49% of low-income respondents.

Economy Seen as Weak, But Most Remain Optimistic 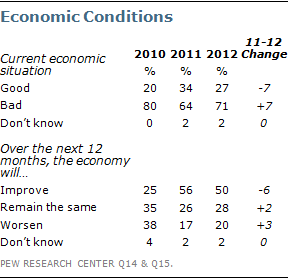 Views about Egypt’s economy are largely negative. Only 27% describe the national economic situation as good, down from 34% last year.

Poor Egyptians are less optimistic. While 57% of both high- and middle-income Egyptians expect the economy to improve, just 42% of low-income respondents share this view.

Mixed Assessments of the Post-Mubarak Era

Less than half of Egyptians say things have improved in the country since Mubarak was forced from office. Just over four-in-ten (44%) say Egypt is better off now that Mubarak is not in power, 26% believe the country is worse off, and another 26% say things are neither better nor worse.

Opinions on this question are closely linked to how people assess the national economy. Fully 76% of those who say the economy is in good shape believe things are better since Mubarak was deposed. In contrast, only 32% of those describing the economy as bad believe the country is better off now that Mubarak is out of power.

The Future for Women and Religious Minorities 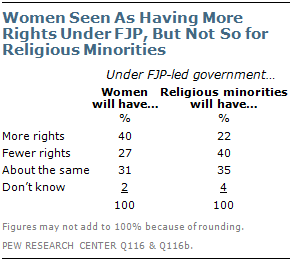 Opinions are mixed about what the future will be like for women and religious minorities in a political environment dominated by the Muslim Brotherhood and its political party, the FJP. A 40%-plurality thinks women will have more rights under a FJP-led government than they have had in the past; 27% say they will have fewer rights; and 31% say they will have about the same rights. Men and women generally share the same views on this question.