As their country grapples with a difficult political transition, Egyptians continue to believe democracy is the best form of government and most trust it more than a strong leader to solve the nation’s problems. Moreover, Egyptians not only value democracy in a general sense – they also value specific features of a democratic society. For instance, solid majorities say it is very important to live in a country with a fair judiciary, a free media, and freedom of speech. Still, the economy also remains a top priority, and Egyptians are almost equally divided over whether a good democracy or a strong economy is more important for their country.

Democracy Is a Priority, But So Is Economy 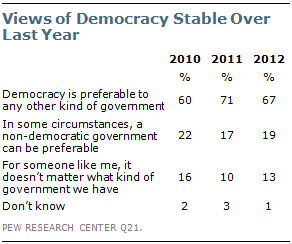 Two-thirds of Egyptians believe democracy is preferable to any other type of government. Just 19% say in some circumstances, a non-democratic form of government may be preferable, while 13% say that, for someone like them, it does not matter what kind of government Egypt has.

This is basically unchanged from last year, when 71% said democracy was the best form of government. Confidence in democracy is somewhat higher now than in 2010, when six-in-ten Egyptians said it was preferable to other political systems. 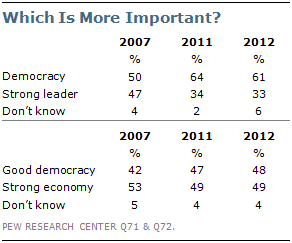 Most continue to believe a democratic government, rather than a strong leader, is best equipped to deal with the country’s problems. Roughly six-in-ten (61%) hold this view, similar to last year’s 64%, but significantly higher than the 50% registered in 2007.

Opinions are divided, however, when Egyptians are asked to choose between democracy and the economy. About half (48%) say a good democracy is more important and about half (49%) say a strong economy should be the priority. Results on this question were almost exactly the same one year ago. 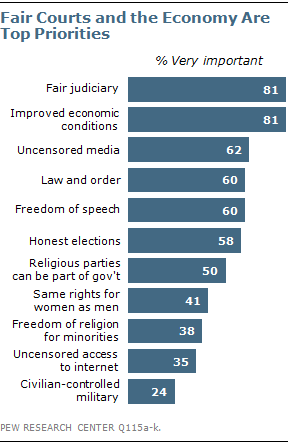 Egyptians believe many key features of democracy are crucial to their country’s future. Roughly eight-in-ten (81%) say it is very important to live in a country with a fair judicial system, and solid majorities rate a free press (62%), free speech (60%), and honest multiparty elections (58%) as very important.

Other key democratic rights and institutions, while considered at least somewhat important by a majority of Egyptians, do not register as top priorities. In particular, only 24% say that having a military that is under control of civilian leaders is very important. Less than half say that equal rights for women (41%), religious freedom for minorities (38%), and uncensored internet access (35%) are very important.

And while most Egyptians value democracy, it is clear that the economy and social order also rank as high priorities. About eight-in-ten (81%) believe improved economic conditions are very important and 60% say this about law and order.

Next: Chapter 4. Role of Islam in Politics
← Prev Page
Page1Page2Page3You are reading page4Page5Page6Page7
Next Page →