One major area of worldwide growth in the last year has been in the mobile market – both in terms of technology development and consumer behavior. Facebook itself now derives roughly 30% of its ad revenue from mobile.

More broadly, mobile ownership in the U.S. has grown rapidly. According to a 2013 Pew Research Center study, a vast majority of American adults, 91%, own a cellphone, over half (56%) have a smartphone and a third (34%) own a tablet computer. But, desktops and laptops still have broader reach and remain the primary mode of digital news consumption.

This is also the case for Facebook usage among U.S. adults, the survey reveals – though mobile news consumers tend to check in more frequently throughout the day. 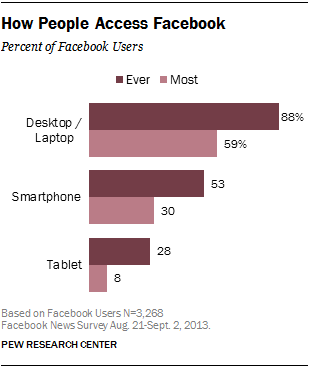 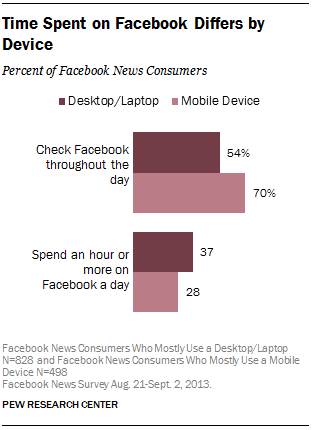 Next: Partisanship as a Part of the Facebook News Experience
← Prev Page
Page1Page2Page3Page4Page5Page6You are reading page7Page8Page9Page10
Next Page →