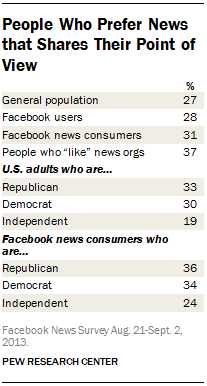 One question that comes with the development of news as more of a social experience is the degree to which people are more likely to get news that conforms to their views. The data here offer some first insights but also suggest there is room for more research.

Those with a political party affiliation also are more likely to say they prefer news that shares their own point of view. Among U.S. adults overall, about a third of Republicans (33%) and Democrats (30%) like news this way, compared with 19% of independents. That pattern also is true among Facebook news consumers; among this group, 36% of Republicans, 34% of Democrats and just 24% of independents say they like news that mostly shares their own point of view.

As mentioned earlier, political statements are some of the more bothersome kinds of posts to Facebook users. Some go the extra mile to respect those who may disagree with their take on a political issue: “With politically charged national news, some issues I feel very strongly about are antithetical to many of my relatives’ opinions,” offers one respondent. “If I post on those topics, I manage my privacy settings to keep those posts off the pages of my disagreeable contacts.”

Still, more than half of Facebook news consumers, 58%, have been surprised by a friend’s or family member’s views – suggesting that at least to some degree Facebook has helped people get to know where their friends stand on different issues.