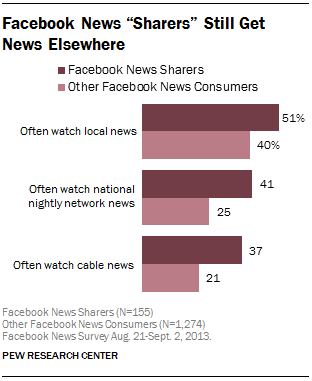 Another important subset of users is those who very actively engage with news on the site – the 12% who often post or share news stories (including posting their own content directly to a news organization’s or reporter’s Facebook page).

While there are some notable similarities between the behaviors of this engaged group and those who “like” or follow news organizations, only about half of this group, 52%, overlaps with the other, suggesting they are distinct populations. 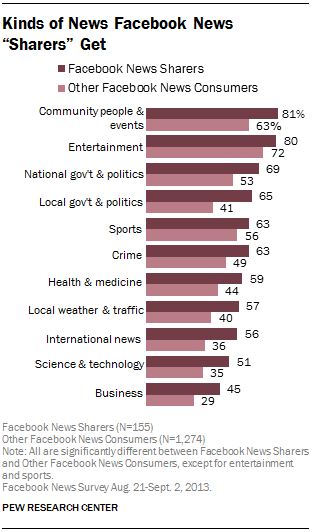 The data also suggest that, similar to those who “like” news organizations on Facebook, greater news engagement on the site coincides with a broader mix of news topics. The more engaged Facebook news consumers – those who “share” news – are more likely to learn about nearly every topic area asked about in the survey. About eight-in-ten of these news consumers (81%) get news about people and events in their own communities. National government and political news reaches 69%, and nearly as many (65%) get news about local government and politics. The more niche topics such as science and technology and business rank lower but still reach half or nearly half of these news “sharers” (51% and 45%, respectively).

Because of the nature of this group, a fair amount of the news they consume is passed along to others, so the breadth of topics may have a ripple effect on the Facebook news diets of others who use the site.

In addition to posting or sharing news stories, these users are overwhelmingly more engaged with other aspects of the Facebook news experience. They are nearly five times more likely to ever see headlines about the latest stories (55% versus 12% of other Facebook news consumers), seven times as likely to click on links to news stories on Facebook (64% to 9%), six times as likely to “like” or comment on news stories (73% versus 12%) and far more likely to discuss issues in the news with other people on Facebook (39% to 2%). And, more than half, 56%, of those who often post or share news have used Facebook to keep up with a news event as it was happening, roughly twice that of other Facebook news consumers (25%).

The most common reason why members of this group post news links is to pass along information they think is important for people to know. A vast majority, 89%, indicates that this is a major reason why they post or share news. The next most common reason is to create a discussion among friends around an issue or event (70%), closely followed by the desire to make a statement (67%).

One respondent described his or her motivations for posting stories: “The items I re-post are because they are something I feel strongly about. It doesn’t matter to me if no one else ever comments or “Likes” or agrees with it. I have placed it there so I can go back and find it again later. It’s my Facebook and I reserve the right to post what I want.”