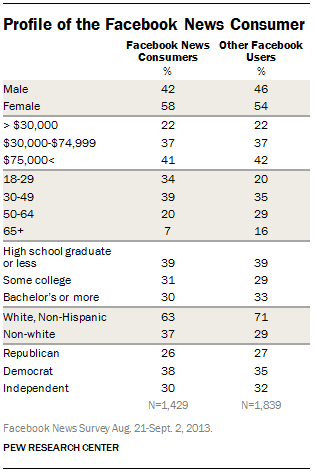 Further, about a third, 34%, of Facebook news consumers are 18-29 years old, compared with only 20% of other Facebook users.

Younger Facebook news consumers are as engaged in news on the site as other Facebook news consumers are. Facebook news consumers who are 18-29 years old are as likely as older age groups – or more so – to go there for breaking news (32%, compared with 30% among 30- to 49-year-olds and 21% of those 50 and older), to say it is an important way they get news (48%, compared with 44% and 36%, respectively) and to get news across topics at roughly the same levels. Other Pew Research Center data have found this is not the case more broadly. In general, when young people do get news, they tend to be less engaged with that news than are older Americans.

Followers of News on Other Platforms 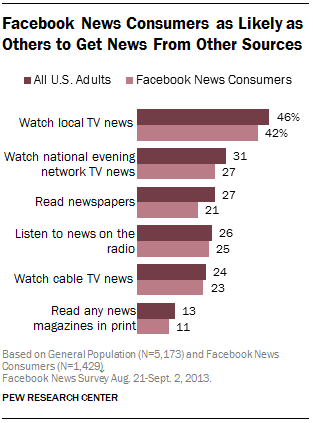 Facebook news consumers still get news on other platforms at about the same levels as the population overall. Roughly four-in-ten Facebook news consumers (42%) regularly watch local television news, as do 46% of all U.S. adults; 23% watch cable news (compared with 24% of all U.S. adults); 21% often read print newspapers (compared with 27% of the population overall);11% read print news magazines (versus 13% of the general population).

News does not seem to replace other activities on Facebook. Rather, news consumers visit the site for more reasons, spend more time on the platform, have been Facebook users for more years and have more Facebook friends than Facebook users who do not get news on the site. 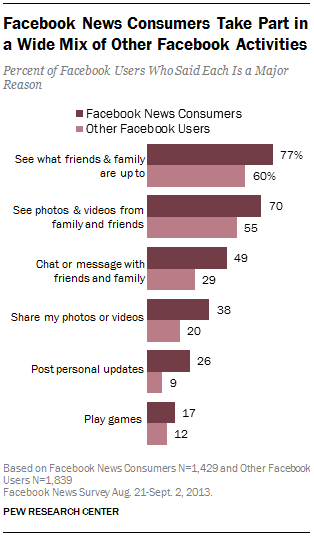 When asked about several possible reasons people visit the site in the first place, Facebook news consumers are more likely to mention each as a major reason. For instance, while keeping up with friends and family is the biggest single driver to the site for both groups, 77% of Facebook news consumers say this is a “major reason” they use Facebook, compared with 60% of other Facebook users. This greater intensity holds true across most of the other reasons offered, including chatting with friends and family on the platform (49% vs. 29%), posting personal updates (26% vs. 9%), seeing photos and video from friends (70% vs. 55%) and sharing their own photos and videos (38% vs. 20%).

Next: The Facebook News Experience
← Prev Page
Page1Page2You are reading page3Page4Page5Page6Page7Page8Page9Page10
Next Page →