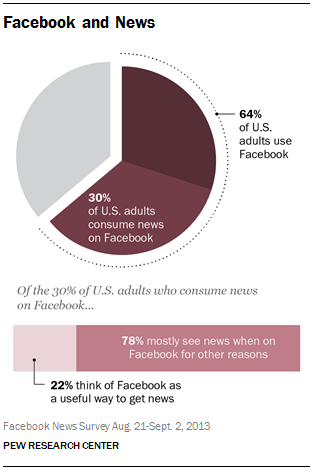 On Facebook, the largest social media platform, news is a common but incidental experience, according to an initiative of Pew Research Center in collaboration with the John S. and James L. Knight Foundation.

Overall, about half of adult Facebook users, 47%, “ever” get news there. That amounts to 30% of the population.

Most U.S. adults do not go to Facebook seeking news out, the nationally representative online survey of 5,173 adults finds. Instead, the vast majority of Facebook news consumers, 78%, get news when they are on Facebook for other reasons. And just 4% say it is the most important way they get news. As one respondent summed it up, “I believe Facebook is a good way to find out news without actually looking for it.”

However, the survey provides evidence that Facebook exposes some people to news who otherwise might not get it. While only 38% of heavy news followers who get news on Facebook say the site is an important way they get news, that figure rises to 47% among those who follow the news less often. “If it wasn’t for Facebook news,” wrote one respondent, “I’d probably never really know what’s going on in the world because I don’t have time to keep up with the news on a bunch of different locations.”

In particular, younger adults, who as a group are less engaged than their elders are with news on other platforms, are as engaged, if not more so, with news on Facebook. Young people (18- to 29– year-olds) account for about a third, 34%, of Facebook news consumers. That far outpaces the 20% that they account for among Facebook users who do not get news on the site.

What’s more, these 18- to 29-year-olds get news on Facebook across topics at roughly the same levels as older age groups, turn there as often for breaking news and deem the site as important a source of news.

These are some of the findings of the survey, which is the first in a multi-part research project by the Pew Research Center, in collaboration with the Knight Foundation, examining the role of news on Facebook and other social media platforms. Among other key findings in this report:

This report is based on a Pew Research Center survey conducted Aug. 21-Sept. 2, 2013, among a nationally representative sample of adults 18 years of age or older. The sample comprised 5,173 respondents, 3,268 of whom are Facebook users, of which 1,429 are Facebook news consumers. The survey questionnaire was written by the Pew Research Center and administered by GfK using KnowledgePanel, its nationally representative online research panel.

Facebook news consumers are defined as those who answered that they “ever get news or news headlines on Facebook.” News is defined as “information about events and issues that involve more than just your friends or family.”

Next: The Role of News on Facebook
← Prev Page
You are reading page1Page2Page3Page4Page5Page6Page7Page8Page9Page10
Next Page →