When it comes to the creation and posting of videos, there are three different steps: the actual capture of the video itself, putting it into a format for sharing under an individual or organization name-at times with editing or mixing of multiple videos and sometimes as raw footage-and then posting the video to YouTube.

Sometimes these steps are all done by one news organization or citizen, while sometimes each step is done by a different entity or individual. Other times it is unclear. Often hardest to discern, especially in breaking news videos, is who recorded the original footage-especially if a news organization then obtained it and then produced a video bearing its logo. Even if guidelines for giving credit appear on the YouTube site, some users and news organizations do not follow them.

Nonetheless, there is a synergy on YouTube in which eyewitnesses, journalists and audiences are interacting in a dependent loop. Citizens are creating their own video but also actively sharing news videos produced by professionals that they consider powerful. At the same time, news organizations are becoming conduits for sharing citizen video along with their own professional journalism.

Because the first step in the YouTube process-capture-can be difficult to establish, this analysis gives a general sense of who shot a particular piece of footage. It can provide a firmer sense of who posted the video and whether it involved some kind of journalistic editing.

Footage of news events can be recorded by many different types of people. Sometimes the person who videotapes or captures the footage-the person actually holding the camera-is a reporter or videographer working for a news organization. Other times, the video might be captured by a freelance journalist or an eye-witness citizen who happens to have a camera on-hand. In still other instances, including some of the most popular videos studied here, the video can come from a stationary camera (such as surveillance video), that may come from a municipal or even a corporate source.

Viewing the finished product, it is often impossible to determine who captured the original video.  This proved especially true in the case of natural disasters and other breaking news events.

In the most viewed videos during this time period, the events were of a magnitude that their validity was in little doubt. The videos offered visual evidence of events that had already been well established. More broadly, though, uncertainly over the authorship of a video could raise questions about credibility.

There are cases when individuals get credit for recording footage, but that level of transparency was more the exception than the rule. One example was a video of the capture of former Libyan leader Col. Muammar Gaddafi. In the video, GlobalPost clearly identified the videographer, Ali Algadi, at the start of the piece. (Warning, the video contains graphic images.) This type of clear attribution is not common, however, suggesting that protocols or ethical expectations for transparency and assignment of credit and responsibility of the sort that might be expected in more traditional settings such as scholarly work or even conventional journalism has not evolved yet in video sharing, at least on YouTube.

After a video is captured, some person or organization takes that footage and puts it into a format that can be viewed by others. At times, this is done by the person or group who captured the video. At other times, a second party obtains and packages the footage.

In looking at the identifications attached to these most viewed videos, the range of "producers" on YouTube falls into three broad categories, news outlets, citizens and outside organizations.

Of the three, news organizations played the largest role in creating the popular news content on YouTube, but citizens played a role almost as large. Groups of a political or organized nature played a much smaller role.

In all, news organizations produced 51% of these most popular news videos across the 15 months studied, meaning the video bore the logo of a news organization and offered no obvious sign that the video had been shot by a citizen. It is clear, though, that in some cases, such as the Tsunami, a news organization obtained some raw video from a freelance journalist or citizen witness, which it then used in a news video.

Yet at least some of the most popular video produced by news organizations was posted on YouTube not to praise the news producer to but mock it.

Meanwhile, citizen-produced videos accounted for 39% of the most watched videos, most of which were live eyewitness news moments.

An additional 5% came from political or activist organizations, including political parties and advocacy groups such as Concerned Women for America. And the sources for 13 videos (or another 5%) were not clearly stated. 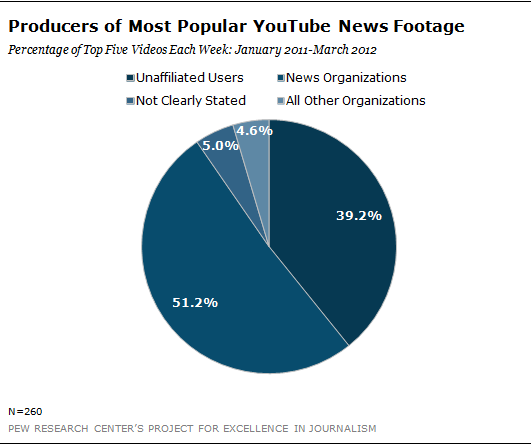 A relatively new news organization, Russia Today, produced far more videos on the list than any other-22 of the most viewed 260.

Founded in 2005 and backed by the Russian government, Russia Today is a global multilingual television news network that has built a large international following. The channel broadcasts to 430 million people in more than 100 countries and is available to 50 million people in the U.S. through various cable and satellite systems.[1]

Russia Today has developed a large online following through a combination of factors. The network has actively promoted its online content. The RT YouTube channel has more than 280,000 followers and the videos in its official channel have been viewed more than 740 million times, a number far greater than many other well-known sources such as Al Jazeera English (380 million views), Sky News (52 million) and Fox News (23 million). Other prominent news organizations have far fewer followers, such as ABC News (111,000), the New York Times (78,000) and ITN News (54,000). 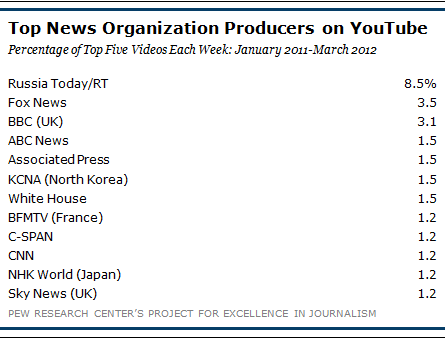 On a number of occasions, Russia Today has, as the New York Times described it in 2010, taken a "dip into conspiracy theories." The channel has regularly reported on rumors, for instance, that the attacks on New York on September 11, 2001, were committed with cooperation of the United States government.

Most of Russia Today’s popular videos (68%) were not edited news packages in any traditional sense. Nor were they about Russia. Instead, they consisted of first-person video accounts of dramatic worldwide events such as the Japanese earthquake or the June 2011 riots in Vancouver following the Stanley Cup Final. The people who shot these videos may not be Russia Today reporters, but the organization acquired the footage and broadcast it, using its own dissemination tools and graphics. In that sense, Russia Today is functioning as a kind of video-sharing service itself, on television, which it then turns around and shares again on YouTube.

The second leading source for the most watched news videos on YouTube during the 15 months studied was Fox News. More than half of its videos, though, were not posted by Fox but by viewers-and not in a positive light.[2] Six of the nine Fox News clips were posted by viewers that, through labeling, were clearly meant to highlight and criticize controversial comments made by the channel’s pundits or guests.

One video that drew attention in January 2011 was a clip featuring conservative journalist “>Tucker Carlson. Acting as a substitute host for Sean Hannity, Carlson argued that NFL star Michael Vick should have been executed for abusing and killing dogs. Most people sharing the video commented that Carlson’s opinion was too extreme.

Another of the most viewed Fox clips was an “>interview with Hank Williams, Jr., a country and western star, in which the singer compared President Obama to Hitler on Fox & Friends in October 2011. All but one of the most watched Fox News clips came from the station’s talk-show programs.

Of the citizen-produced videos, many came about as people found themselves to be eyewitnesses of natural disasters, accidents or riots-and thought to turn on their recording device. Of the 102 videos that were shot and produced by citizens with no formal affiliation with a news organization, 21 of them (21%) captured live disasters or major accidents. These included footage of a January 2011 “>flood in Toowoomba, Australia, shot by an individual with the user name "whitelightbringer," and a quick shot taken by an iPhone of a “>stage collapsing at the August 2011 Pukkelpop music festival in Belgium. The next largest category, protests and riots, made up 13 of the citizen-produced videos.

What emerged less frequently among these top videos were planned pieces that individuals set out to investigate and produce-the citizen journalists if you will. There was editing by citizens, but most of this was not the kind of extensive editing journalists do to produce full packaged pieces. Instead, the editing in these cases was mostly the cutting up of eyewitness footage. Citizens, in other words, have carved out an important role as eyewitnesses more-so than citizen-reporter.

[1] YouTube has policies against copyright infringement on its site-and these examples of individuals posting content from news sources could likely fall into that category. However, different companies spend different amounts of effort on trying to prevent this from happening. Viacom, the company that owns TV shows such as South Park and The Daily Show with Jon Stewart, has been vigorous in its attempts to keep its content off of YouTube and even sued YouTube for $1 billion in damages in 2007. Other companies, such as Russia Today and smaller news organizations, have been less stringent.

Next: Who Posts the Videos
← Prev Page
Page1Page2Page3You are reading page4Page5Page6Page7Page8Page9Page10
Next Page →