What draws people to certain types of news videos and not others?

PEJ created a broad list of the visual appeal that came through in the videos. 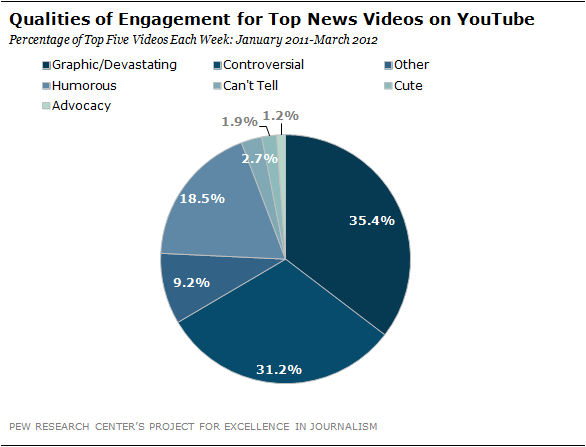 More than a third (35%) of the videos depicted devastating or intensely graphic images. These included videos that demonstrated the dramatic impact of the Japanese tsunami or the violence that occurred during some Middle East protests.

Another roughly one-third of the most popular videos (31%) spoke to a controversy of some kind. In some cases, the video was presented in a mocking manner. For example, one shared video was a 2011 news report detailing Sarah Palin’s re-telling of the &feature=player_embedded”>story of Paul Revere that suggests Palin "got a bit confused on the details." Others informed viewers of details regarding an ongoing controversy such as President Obama’s “>July 2011 message about the debt agreement he reached with Congress.

Not all of the controversies were political in nature. One, for example, was a 2011 appearance by celebrity Ricky Gervais on CNN’s Piers Morgan Tonight in which he shared his views on religion and atheism. The video drew almost 400,000 views. (The video has since been removed due to copyright issues.)

Humor was at the heart of 18% of the most popular news videos. One was a July 2011 video of a Lithuanian mayor driving over illegally parked cars with a tank. Another tagged as "news" was a montage of Obama speeches edited together to make it seem as if he was singing the words to a “>song by pop singer Lady Gaga.