According to YouTube executives, there are two different paths a video can take to become viral. First is the classic viral curve-which is more in the shape of a bell or steep mountain peak. In this case a video is posted and at some point (perhaps after sitting on the site for quite a while) is "discovered" by a popular individual and takes off. There is a very fast, massive spike in views. The views reach their highest point very quickly and then fall off just as quickly, mostly vanishing.  The second style of viral video is that which has remarkable staying power. It may rise to popularity much the same way but then remains popular for months and even years, getting hundreds of thousands of views every day.

Only a small number of videos ever meet either of these scenarios. And news, which by its nature changes day to day and even hour to hour, has an even harder time. Still, certain news events have broken through. The Japanese tsunami fit the classic viral spike. The top Japanese earthquake-related video received about 1.8 million views a day during its first week. It remained a top-viewed video for the three weeks that followed. Then it declined to an average of 16,000 views a day over the subsequent 15 months. The death of Osama bin Laden also followed this classic curve. Combined, two versions of President Barack Obama’s speech “>announcing the killing of the al Qaeda leader were viewed roughly 680,000 times a day for the first two weeks. That fell off to an average of about 3,500 times a day in the following 14 months. 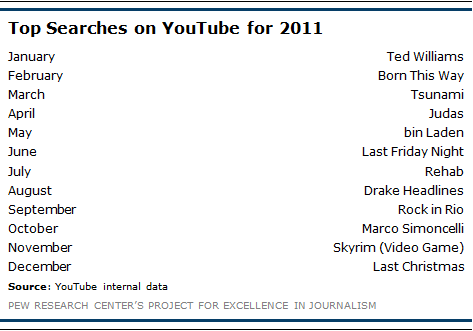 Fewer news events follow the second pattern of having longer staying power. While not categorized as "news and politics" “>Kony2012 demonstrated some sense of this sustained popularity. The 30-minute video, classified by YouTube as "activism," that called for action against Ugandan warlord Joseph Kony was viewed an average of 7.6 million times a day for the 10 days after it was posted on March 5, 2012. In the four months since, it was viewed an average of 125,000 times a day. Still, compare that to the most watched video of 2011. "Friday," a four-minute pop song by 13-year-old Rebecca Black, was viewed more than 180 million times during the year-an average of almost 500,000 views each day (and still appears at the top of the list most Fridays.).[1] Similarly, the most watched video of all time (as of July 2012) was a “>music video by Justin Bieber which has been viewed more than 755 million times in the two years since it was posted-a daily average of roughly a million views. And a one-minute exchange between two children known as "“>Charlie bit my finger" has been viewed an average of 240,000 times per day in the five years since it was first posted.