A New Kind of Visual News

See a visual discussion of the findings.

On March 11, 2011, an earthquake registering 9.0 on the Richter scale struck the coast of northeastern Japan, triggering a tsunami that would kill more than 18,000 people and leave an estimated $180 billion in damage. The news media worldwide provided extensive coverage of the disaster and its aftermath, but millions of people also turned to the web to learn about the event on the video sharing website YouTube. [1]

In the seven days following the disaster (March 11-18), the 20 most viewed news-related videos on YouTube all focused on the tragedy-and were viewed more than 96 million times.

What people saw in these videos also represented a new kind of visual journalism. Most of that footage was recorded by citizen eyewitnesses who found themselves caught in the tragedy. Some of that video was posted by the citizens themselves. Most of this citizen-footage, however, was posted by news organizations incorporating user-generated content into their news offerings. The most watched video of all was shot by what appeared to be fixed closed-circuit surveillance camera at the Sendai airport.

The disaster in Japan was hardly a unique case. Worldwide YouTube is becoming a major platform for viewing news. In 2011 and early 2012, the most searched term of the month on YouTube was a news related event five out of 15 months, according to the company’s internal data.

What is the nature of news on YouTube? What types of events “go viral” and attract the most viewers? How does this agenda differ from that of the traditional news media? Do the most popular videos on YouTube tend to be videos produced by professional news organizations, by citizens or by political interest groups or governments? How long does people’s attention seem to last?

The Pew Research Center’s Project for Excellence in Journalism examined 15 months’ worth of the most popular news videos on the site (January 2011 to March 2012)[2]-some 260 different videos in all-by identifying and tracking the five most-viewed videos each week located in the “news & politics” channel of YouTube, analyzing the nature of the video, the topics that were viewed most often, who produced them and who posted them.[3]

The data reveal that a complex, symbiotic relationship has developed between citizens and news organizations on YouTube, a relationship that comes close to the continuous journalistic “dialogue” many observers predicted would become the new journalism online. Citizens are creating their own videos about news and posting them. They are also actively sharing news videos produced by journalism professionals. And news organizations are taking advantage of citizen content and incorporating it into their journalism. Consumers, in turn, seem to be embracing the interplay in what they watch and share, creating a new kind of television news.

At the same time, clear ethical standards have not developed on how to attribute the video content moving through the synergistic sharing loop. Even though YouTube offers guidelines on how to attribute content, it’s clear that not everyone follows them, and certain scenarios fall outside those covered by the guidelines. News organizations sometimes post content that was apparently captured by citizen eyewitnesses without any clear attribution as to the original producer. Citizens are posting copyrighted material without permission. And the creator of some material cannot be identified. All this creates the potential for news to be manufactured, or even falsified, without giving audiences much ability to know who produced it or how to verify it.

Among the key findings of this study:

The news viewership on YouTube is probably still outpaced by the audience for news on conventional television worldwide. While those top 20 tsunami videos were viewed 96 million times worldwide the week of the disaster, for instance, more people almost certainly watched on local and national television around the globe. Twenty-two million people on average watch the evening news on the three broadcast channels each night in the United States alone, and larger numbers watch local TV newscasts.

But YouTube is a place where consumers can determine the news agenda for themselves and watch the videos at their own convenience-a form of “on demand” video news. In the case of the Japanese earthquake and tsunami, audience interest continued for weeks. The disaster remained among the top-viewed news subjects for three straight weeks. Based on the most viewed videos each week listed by YouTube, it was also the biggest news story on the site for 2011.

For the news industry, the growth of YouTube and other video sharing sites represent a significant opportunity and also a challenge. News producers can use the site to grow their audience, find citizen-created videos, build their brand and generate revenue. At the same time, video-sharing sites are yet another platform they must understand-and to which they must adapt. For its part, YouTube (owned by Google) is developing partnerships with news organizations, including with the news service Reuters, in which the site provides Reuters with money to produce content unique to YouTube. But Company executives say they have no intention of getting into content creation, or moving into the news business. “YouTube is acting as a catalyst for the creation of new original content, by providing funds to content producers as advances against ad revenue,” YouTube’s News Manager Olivia Ma explains.[5] By whatever description, however, YouTube is becoming an important platform by which people acquire news.

Seven years after it was developed by three former employees of PayPal, the reach of YouTube is enormous. The video sharing site is now the third most visited destination online, behind only Google (which owns YouTube) and Facebook, based on data compiled by Netcraft, a British research service. According to the company’s own statistics, more than 72 hours of video are uploaded to YouTube every minute. The site gets over 4 billion video views a day. Slightly under a third of those, 30%, come from the United States.

YouTube has also become a part of the lives of most Americans. Fully 71% of adults have used sites like YouTube or Vimeo at some time, according to a 2011 survey by the Pew Research Center’s Internet & American Life Project. That is up from 66% in 2010. And 28% visit them daily. 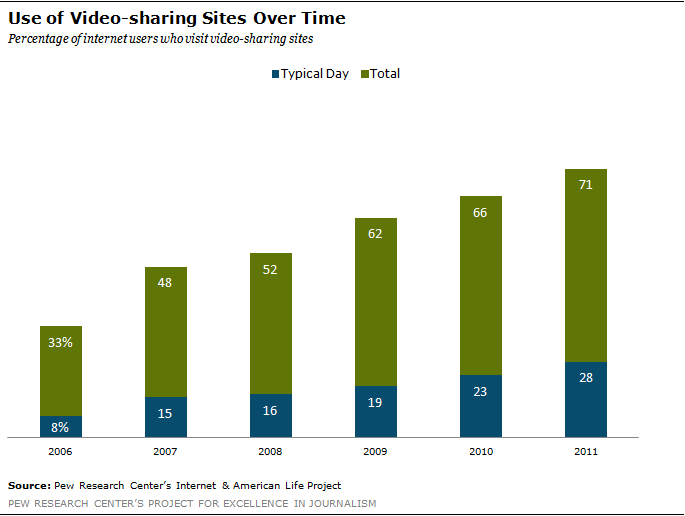 Bought by Google in 2006 for $1.65 billion in stock, YouTube has moved from being a repository of videos to becoming a force that is investing in content creation (if not doing the creation themselves). In 2007, the company created a Partner Program, which shares revenues with content creators in order to encourage the production of more creative content. That program now has more than 1 million partners in 27 countries, including news organizations such as CBS, the BBC and National Geographic. In addition, the company has given direct grants to a smaller group of news content producers as a further way of promoting new ideas and production models.

So far, the approach from news organizations has been a blend of participation and resistance. Many news outlets have developed their own YouTube channels and are avidly posting content. The Associated Press, for example, created its channel in 2006 and now boasts more than 250,000 followers and more than a billion views of its videos. (A user becomes a follower of a YouTube channel by hitting the ‘subscribe’ button, which places updates from that channel on the user’s homepage.) The New York Times’ news channel has more than 78,000 followers while Russia Today has more than 280,000. Some news services, such as ABC News, put on YouTube many of the same stories that appear on their television channel.

Other news organizations have chosen a more cautious approach, including taking steps to keep content off the platform. One method for this is through a service offered within YouTube’s Content ID software. Partners of this program can send any of their copyrighted material to YouTube and have it blocked if it gets posted. (The Content ID program, with more than 3,000 members, also has other features companies can take part in such as revenue sharing.) [6]

Some non-news organizations, including governments, have also attempted to restrict the availability of their content on YouTube, mostly for political reasons. In March 2009, for example, the government of Bangladesh blocked access to the site entirely after a recording of a private meeting between the Prime Minister and army officers was uploaded. The incident occurred two days after an attempted mutiny by border guards left more than 70 people dead. Government officials insisted it was in the country’s “national interest” to block the site and more videos might worsen the tense situation. China, Libya, Pakistan and Iran have also all attempted at one point or another to block YouTube content.

The evolving government and media policies toward YouTube make understanding the nature of what news content is on the site and which is most popular all the more important.

[1] According to the Project’s News Coverage Index, which measures the news agenda of the mainstream media, 57% of the newshole on radio, television, online and in print was devoted to the event the first week it happened. The NCI measures the content of more than 50 news outlets. Newshole is the time on cable, network and radio and space on newspaper front pages and in the top five stories on news websites

[2] PEJ tracked 295 news videos on YouTube during the 15-month period. However, 35 videos were removed from the site for a variety of reasons before the examination was completed, resulting in the overall sample of 260 videos.

[3] As with many settings on YouTube and other social networks, it is up to the person posting the video to choose the categoriztion or channel where each post will appear on the site. This study examines the most popular videos in the “news & politics” category of YouTube. What one person might categorize as “news and politics” another person might label as “science and entertainment” or “tech.” YouTube does not do any reclassifying on its own. One story not categorized as news was “>Kony2012, which called for action against Ugandan warlord Joseph Kony. The video was posted in March 2012 and viewed more than 76 million times on YouTube in 10 days. But since it was labeled as “nonprofits & activism” it did not appear in the YouTube News and Politics channel and therefore is not part of the analysis. (Click here for a detailed report by the Pew Research Center about the attention surrounding the Kony2012 video.)

[4] In comparison, the vast majority (76%) of packages on national network news were between 2 and 5 minutes. Less than 1% were longer than 5 minutes and 5% were under a minute.

Next: Top Stories
← Prev Page
You are reading page1Page2Page3Page4Page5Page6Page7Page8Page9Page10
Next Page →