One concern about television news has always been compression of time. The median length of a story with video on local television, according to PEJ’s detailed studies of the medium, is 41 seconds, and some critics have complained this is too short. [1] The median length of a network TV news package was 2 minutes and 23 seconds.[2] Even legendary anchorman Walter Cronkite admitted the evening news was limited to being a powerful headline service but recommended his audiences also read newspapers.

In a television platform that allows the video to be as long as makes sense for that particular story and in which audiences can render clearer judgments about what length of content they will watch, what is the verdict?

The answer, at least according to this analysis, is that audiences are willing to watch content of differing lengths. Indeed, there was significant variation in the length of the popular news videos on YouTube.

But the median does not fully tell the story. There is fairly little variation in the length of stories in the format of a commercial television broadcast. Most packages fit into fairly strict formulae in terms of length. We see a good deal more variation in the most watched videos on You Tube.

More than a quarter were fairly short. Fully 29% of the YouTube videos were one minute or less in length. Half were no more than two minutes long.

But half of the most popular videos were more than two minutes, and 18% were longer than five minutes. Four videos, such as the broadcast of the February 2012 Russian presidential debate between representatives for Vladimir Putin and Mikhail Prokhorov, lasted more than 50 minutes. 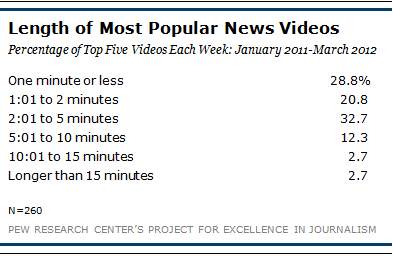 There is also a strong connection between the qualities or features of the video and its length. Shorter videos were more likely to include graphic images than anything else, such as the tsunami or the crash of an Italian cruise ship. Fully 43% of videos two minutes or less, and 41% five minutes or less, were graphic in nature. None of the videos that lasted longer than 10 minutes were in that category.

Longer videos, by contrast, were more likely to be humorous or involve controversy. Of the videos longer than five minutes, 15 depicted controversies (33%). One was a February 2011 ” target=”_blank” rel=”noopener noreferrer”>prank phone call to Wisconsin Governor Scott Walker by The Buffalo Beast’s Ian Murphy, posing as conservative activist David Koch, which lasted 10 minutes. In October 2011, a video from the website conservARTive.com of a group of protesters at an ” target=”_blank” rel=”noopener noreferrer”>Occupy Atlanta rally refusing to allow U.S. Congressman John Lewis to speak to the crowd lasted 10 and a half minutes.

Humor was also associated with longer videos. Of the videos longer than five minutes, 13 were humorous (28%), such as the editions of the Philip DeFranco show and President Obama’s speech at the 2011 White House Correspondents’ Dinner in which he took jabs at the birther movement, Donald Trump, National Public Radio and potential GOP presidential candidates.

[2] The median length of national network TV packages was derived from PEJ’s News Coverage Index, which includes coding of the three major networks, ABC, CBS and NBC, each weekday throughout all of 2011.

[3] The average length of the YouTube videos was 3 minutes and 53 seconds, compared with an average of 68 seconds for local television packages and 2 minutes and 26 seconds for national network packages.

Many Americans Get News on YouTube, Where News Organizations and Independent Producers Thrive Side by Side
In Social Media and Opinion Pages, Newtown Sparks Calls for Gun Reform
Amid Disasters, Bloggers Look to Score Some Partisan Political Points
Bloggers Remember Elizabeth Taylor