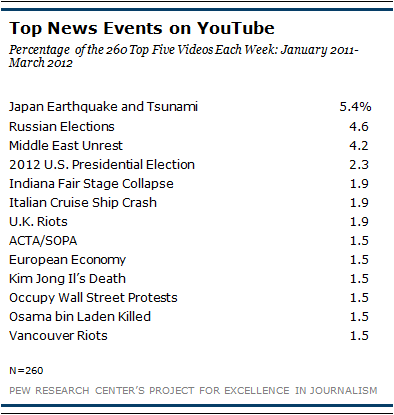 The most viewed news event on YouTube between January 2011 and March 2012 was the earthquake and tsunami that struck Japan in March 2011. For three weeks, the disaster accounted for at least one of the five most watched news videos, although the video at the top of the list shifted each week. The first week, the most watched video was what appeared to be surveillance footage of the “>tsunami wave hitting Sendai airport. The second week, the top video came from Britain’s Channel 4 News and showed two minutes of the waves rushing into Miyako City. The third week, the top video was footage taken from a Japanese Coast Guard vessel heading straight into a wave to avoid damage.

After falling out of the top news videos for a week, the tsunami returned to the list for two more weeks in April. The video that attracted most attention those two weeks was footage from Russia Today showing a ” target=”_blank” rel=”noopener noreferrer”>dog reunited with its owner three weeks after the disaster.

The video that attracted the most attention of the disaster on YouTube during these five weeks came from various sources. Some of the footage came from eyewitnesses who happened to have a camera on-hand when the disaster struck (many of these were then broadcast by Russia Today without either narration or editing).

Another form of popular video was surveillance footage from closed -circuit cameras that happened to be recording at the moment the tsunami struck as well as footage shot by official photographers in helicopters recording the waves as they crashed the coastline and destroyed buildings. 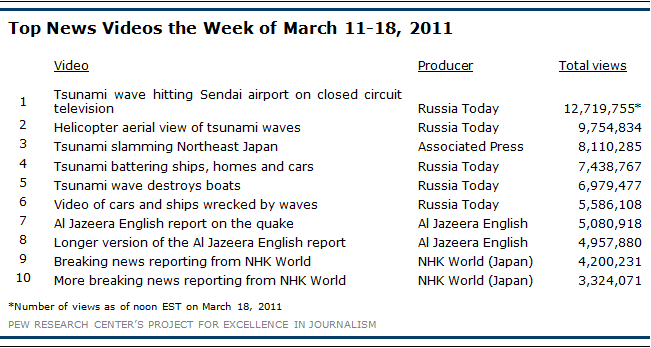 Still a fourth popular source of video were news stories broadcast by news organizations such as Al Jazeera English that summarized the events and included narration from reporters. Such videos were sometimes posted on YouTube by the news organizations and sometimes by audiences who wanted to share them. Even with some editing to provide context, what stood out in these stories, too, was the power of the raw pictures and images. The essence of these videos was their visual character rather than interpretive or explanatory components.

The second biggest news storyline on YouTube during the 15 months studied was the Russian parliamentary and presidential elections. This event was drawn out over a longer period of time than the tsunami videos and was made up of two parts. The election for 450 seats in the State Duma took place on December 4, 2011. Related videos began showing up in September, four months before. Then, in the month leading up to the March 4, 2012, presidential election, there were seven videos that ranked highly on YouTube’s lists.

Overall, 12 different election-related videos that varied in content and focus made the list. Only one of the videos was a traditional broadcast news report-a “>September 2011 story showing Prime Minister Vladimir Putin attending the International Exhibition of Arms. Two of the videos consisted of “> presidential debates posted in their entirety, suggesting that hundreds of thousands of people watched the debates on YouTube rather than on traditional television. 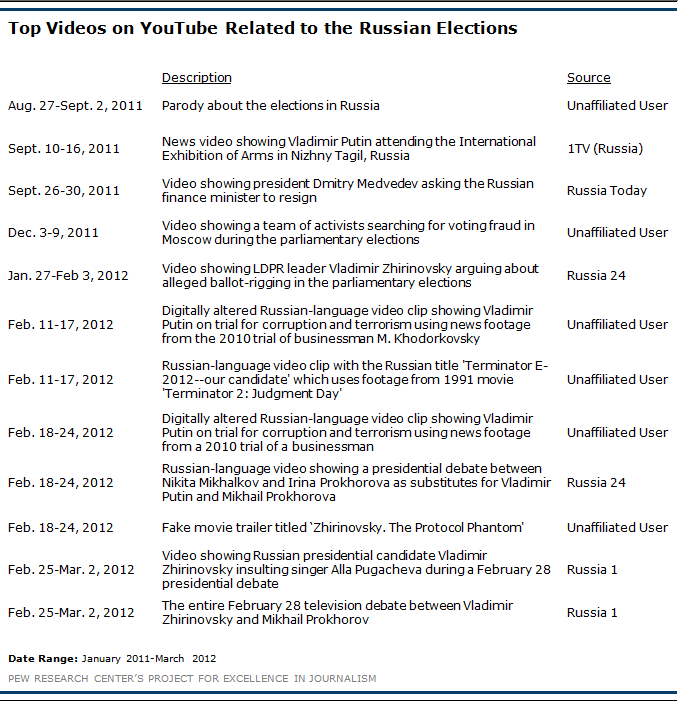 Some of the footage came from surprising moments of the campaign. One was a “>six minute clip from a February debate in which Vladimir Zhirinovsky, the candidate of the right-wing nationalist Liberal Democratic Party of Russia, insulted singer Alla Pugacheva, a supporter of independent candidate Mikhail Prokhorov.  Zhirinovsky, who is known for strong rhetoric, responded to a comment from Pugacheva by saying, "You artists, like prostitutes, lie underneath any leader for money. You all lay under Brezhnev, under Gorbachev, under Yeltsin, under Putin. Tomorrow, I will enter the Kremlin, you will all lie under me and I will spit on you and wipe my feet on you." Even though Zhirinovsky was never considered a strong candidate (he received only 6% of the final vote), his fiery pronouncement drew 1.5 million views the week of the debate.

YouTube also served as a platform for users to give voice to their views about the election, either in a serious or satirical manner. Many of these also contained complex digital altering, such as a “>50-second fake news clip posted in February which used special effects to make it appear as if Prime Minister Vladimir Putin was on trial for corruption and terrorism. The piece, which made the list of most popular videos on YouTube for two consecutive weeks, used news footage from the 2010 trial of businessman Mikhail Khodorkovsky to produce the effect.

The unrest, protests and violence throughout the Middle East that became known as the "Arab Spring" was the third biggest news story on YouTube during the 15 months studied. These events continued to get heavy viewing for 10 months in 2011. Early in the year, the focus was on dramatic scenes from the turmoil in Egypt. One clip, viewed more than 1.8 million times the week of February 7-11, was a &skipcontrinter=1″>cellphone video of a diplomatic car that ran through a crowd of protestors, injuring at least 20. Another from the same week depicted footage of an unidentified &skipcontrinter=1″>protestor shot and killed in the streets of Alexandria, reportedly by Egyptian police. (Warning, both videos contain graphic images.)

Three weeks later, events in Libya spurred the next round of viewing. First-person footage of ” target=”_blank” rel=”noopener noreferrer”>gunfire in a Libyan city and an edited collection of clips from the United Nations Refugee Agency showing tensions between migrants on the “>border of Libya and Tunisia were among the most popular.

Events in Libya then fell from heavy viewing for seven months but came back onto the radar in October 2011 when multiple versions of exclusive footage of the capture of former Libyan leader Col. Muammar Gaddafi, shot by an independent cameraperson and distributed by GlobalPost, received more than a million views. (Warning, the video contains graphic images.)

As with the videos regarding the Japanese quake, the most popular Arab Spring videos captured dramatic visual moments of the news as it was happening, including close-up views of violent exchanges.

Next: News Videos Compared with the Top Videos
← Prev Page
Page1You are reading page2Page3Page4Page5Page6Page7Page8Page9Page10
Next Page →