While pop stars often receive millions of hits for their videos and interviews on YouTube, the lure of personality was less of a draw for news and political videos. Fully 65% of the most watched news videos did not feature any individual. And no single person was featured in even 5% of the most popular studied here. 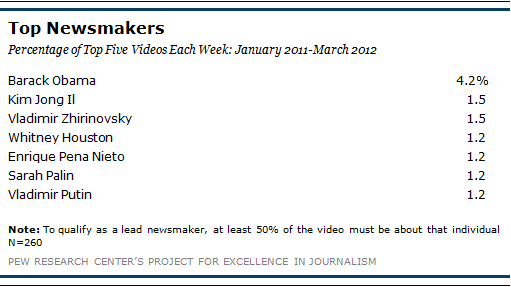 President Obama was featured in more of the most popular news videos than any other individual. (The audience for YouTube is 30% U.S.-based and 70% from other countries.) That is almost three times as many as the next most watched newsmaker here (North Korean leader Kim Jong Il). Still it was not a large number. In all 4% of the 260 videos studied here, 11 videos in all, or just over 10% of those that featured a dominant newsmaker, focused on the president.

The content of the 11 videos that featured Obama varied widely. Four were speeches by the president offered in their entirety: his comical April 11, 2011, address at the White House Correspondents’ Dinner, two versions of the “>announcement that Osama bin Laden had been killed, and an enhanced video of his “>2012 State of the Union Address that included annotation provided by the White House. Two videos captured informal moments: his “>brief singing of an Al Green song at a New York fundraiser and an instance where he accidentally spoke over Queen Elizabeth during a “>banquet at Buckingham Palace. A “>50-minute interview presented by YouTube and Google+ also made the list in January 2012, as did a March 2011 “>satirical ad produced by the Republican National Committee that criticized the president’s record. Of the 11 videos featuring Obama, five of them were produced by the White House, while the rest came from other sources.

Beyond Obama, only two other people appeared in even four of the most popular videos studied. Kim Jong Il, the late leader of North Korea, was featured in clips from the state news agency of North Korea (KCNA). Those videos showed “>citizens grieving over his December 2011 passing and sparked an online debate about whether the mourners actually felt sad over the death or whether the North Korean government shaped the clips to promote a certain perspective.

The other person to appear in four videos was controversial Russian politician Zhirinovsky, who made a name for himself using fiery rhetoric during the presidential campaign.

Of the 260 most popular videos in the news category, 5%, or 14 videos, related to celebrity news. Over the 15-month period studied, one entertainment-focused story was among the most popular for more than one week, the February 2012 death of singer Whitney Houston, including a breaking “>ABC News report that chronicled the star’s troubled career.