Before Google or Facebook, an early major driver of Internet traffic was the Drudge Report. The site, founded by Matt Drudge, first gained national recognition during the Clinton presidency for posting insider information about the Monica Lewinsky scandal. Two decades later, while Drudge is still a small scale operation, it remains, according to the data, an influential driver of traffic to top news sites. The Drudge Report ranked as a driver of traffic to all but six of the top sites studied. And, more striking, it ranked second or third in more than half (12), outpacing Facebook.

In other words, the Drudge Report’s influence cuts across both traditional organizations such as ABC News to more tabloid style outlets such as the New York Post. What’s more, Drudge Report drove more links than Facebook or Twitter on all the sites to which it drove traffic. 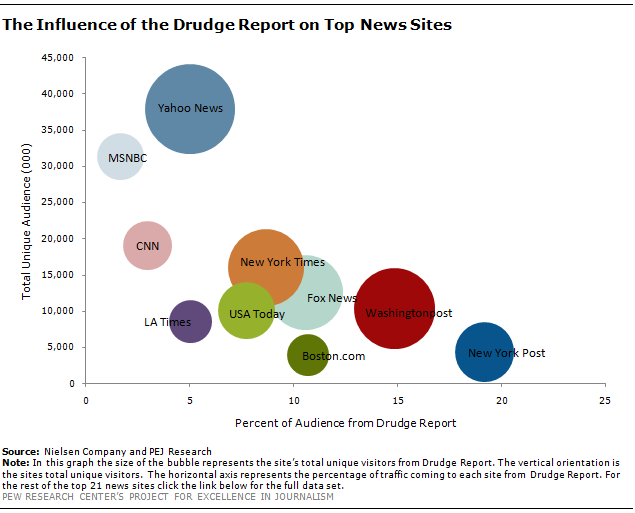 Next: Twitter
← Prev Page
Page4Page5You are reading page6Page7Page8Page9Page10Page11Page12Page13Page14
Next Page →

Navigating News Online The Top 25 Who Drives Traffic to News Google Drives Most Users Facebook Is Becoming Increasingly Important
Drudge Report: Small Operation, Large Influence
Twitter How Users Interact With News Where Users Go When They Leave Google: Parasite or Provider? The Importance of the Home Page Demographics About the Study Topline