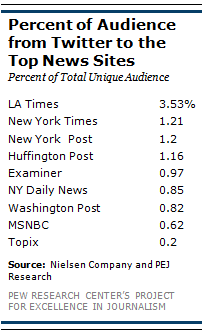 Despite its growth and the amount of attention it receives, the micro-blogging service Twitter appears at this point to play a relatively small role in sharing of links to news sources. Of the top 21 sites for which there were data, Twitter showed up as referring links to just nine. And for all but one of those nine, Twitter sent only about 1% of total traffic.

While these Twitter numbers are clearly small, it is important to note that they reflect traffic coming directly from the website www.twitter.com. Third party applications, such as Tweetdeck, are not included in these Nielsen measures. Nielsen says there are two reasons for this. First these applications are not browser-based programs. Second, most of these types of applications do not route traffic through Twitter.com. Dozens of such third party applications exist. Many offer the same functions for other social networks such as Facebook, as well as for Twitter, though most of the usage tends to be tied to Twitter. The amount of traffic these applications account for is not clear but third party estimates put the figure somewhere around 40% of all the traffic that goes through a Twitter server.[1] (Links sent through a URL shortener such as “bit.ly” are counted in Nielsen’s Twitter.com figure.)

Even if these third party applications were counted, however,
the percentage of total traffic sent to a top news site via a Twitter-based
link would still be small, especially in comparison with the traffic that comes
through Google or to the news sites directly. Twitter says it had around 175
million accounts worldwide in 2010. Facebook, on the other hand reported 400
million in 2010 and up to 500 million in 2011.

Of the top news sites, one stood out for getting more traffic via Twitter than anyone else. At LAtimes.com site, 3.53% of its traffic came from Twitter; that is more than it received from Facebook (2.05%) and more than triple the next site on the list of Twitter beneficiaries.

Only a handful of other sites made the list for referring substantial amounts of traffic. And these all tended to be aggregators, search engines or social networks where consumers shared or recommended content. Yahoo (Yahoo News and Yahoo Search combined), for instance, appears on 7 o f the top 21 sites.  Reddit and StumbleUpon, two aggregators of news, both show up as a referrer on 8 of the top 21 sites (ABC News.com, Boston.com, CNN.com, Examiner.com, HuffingtonPost.com, DailyMail.co.uk, NYTimes.com, USAToday.com).  Finally, Ask.com (formerly askjeeves.com) one of the Web’s oldest search engines, shows up as a referral page on 4 of the top sites (Examiner.com, Huffingtonost.com, Topix.com, ABCNews.com).

1.The
most recent estimate of these figures comes from social analytics company Sysmos

Next: How Users Interact With News
← Prev Page
Page4Page5Page6You are reading page7Page8Page9Page10Page11Page12Page13Page14
Next Page →

Navigating News Online The Top 25 Who Drives Traffic to News Google Drives Most Users Facebook Is Becoming Increasingly Important Drudge Report: Small Operation, Large Influence
Twitter
Other Referring Sites
How Users Interact With News Where Users Go When They Leave Google: Parasite or Provider? The Importance of the Home Page Demographics About the Study Topline