Regardless of how they arrive, how often do visitors return to news sites over the course of a month, and how much time do they tend to spend there?
Online experts note that tracking frequency of visits is a complicated issue. Some analysts, like researcher Matthew Hindman at George Washington University, argue that unique visitors over count individuals and under count their repeat visits. The figure, they contend, tra 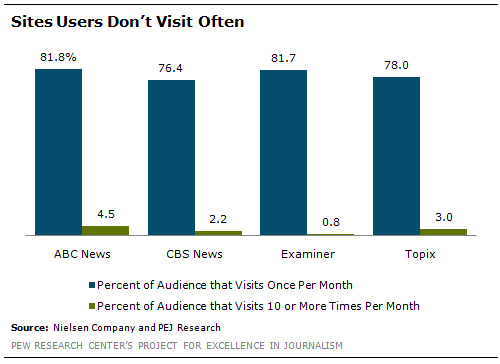 cks computer “cookies,” not people. So people who visit a site from different computers or different user ID’s will be counted as two different people, and people who set their computers to erase cookies may be counted multiple times as well. Despite the debate over unique visitors, the comparison among sites is telling, and the numbers are so lopsided that even if the number of unique visitors is inflated by a factor of two or more, and the number of repeat visits might be increased by that amount, these figures reveal a challenge for news.

A consistent pattern emerged across the 25 sites.

The majority of visitors are extremely casual users, visiting only once or twice per month.

On average, 77% of the traffic to the top 25 news sites came from users who visited just one or two times. The percentage varied among sites, but for all was more than half of their unique visitors for the month. Examiner.com, a local news aggregator site with some original content, had the highest percentage of these casual visitors (93%), followed by CBSNews.com (90%) and ABCnews.com (89%). Yahoonews.com, had lowest number of people who visited only once or twice, but it was still more than half (55%).

Indeed, casual users dominated on all sites, often by a margin of more than five to one. 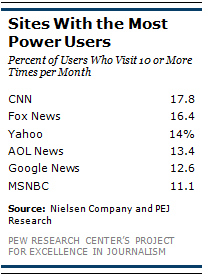 Who benefits from having the largest percentage of power users? With a couple of exceptions, it’s the biggest of the big: At the highest end was CNN.com, where almost one in five is a power user (18% visit more than 10 times per month), followed by FoxNews.com with 16%. All of the sites with double digit power users rank in the top eight news sites in popularity, suggesting that having a larger base of loyal visitors is one key to success. The only two of the top eight sites that did not reach double digits were NYTimes.com, which ranks fifth in unique visitors and seventh in power users (9% of its audience visit more than ten times per month) and Huffingtonpost.com, which ranks seventh overall but 17th out of 25  in power users. There might be two other categories—those that visit occasionally–three to six times a month. And then there are those who visit seven to nine times; call these frequent visitors.

The occasional visitors made up an average of 13% of the visitors to these sites on average; the frequent visitors just 3%.

One site that stands out from the general pattern is MailOnline (dailymail.co.uk), the Website of the U.K.-based Daily Mail newspaper. The largest percentage of its audience visits just once a month (46.5%).  But almost a third (31%) visit three to six times; and another 9% visit seven to nine times.

The bottom line is that across the top 25 websites, the majority of users are casual users. Even if the number of repeat visits is undercounted substantially, perhaps even by half, casual visitors would still make up a plurality of the traffic. Developing a strategy to appeal to or increase the loyalty of these visitors—perhaps even to users who would pay for the content—is a challenge. But there also does seem to a potential audience of core, loyal users who value the brand and come often. For now, the largest, most nationally known sites have the advantage here. 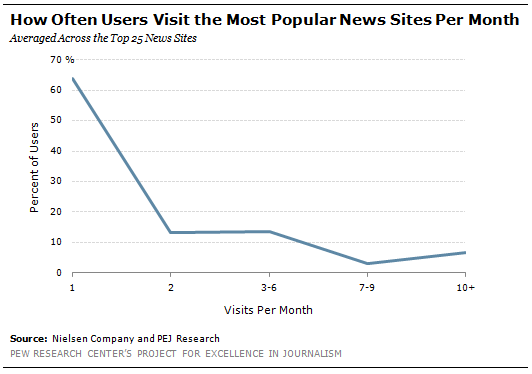 How Users Spend Their Time with News Online

How much time do people spend with news sites? Overall, the audience pattern forms a spoon-shaped curve. The plurality, between 30% and 40% of the audience, spends fairly little time on a site—less than five minutes.
The percentage that spends between six and 10 minutes per month then drops to about half that (between 15% and 20%). And it falls even further to between one and five percent for 41 to 60 minutes. 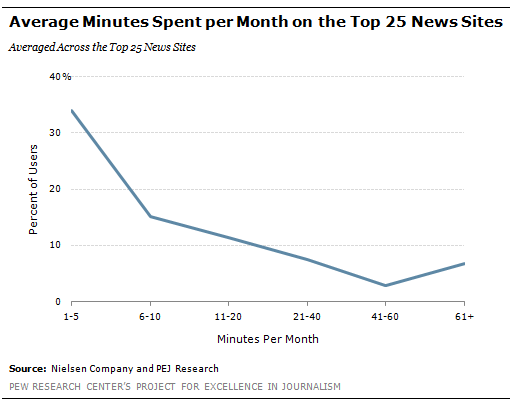 But an uptick occurs when you move to those who spend more than one hour per month. Here, the increase is not as uniform across all 25 sites, but those with the largest unique audience still rank at the top. CNN.com and FoxNews.com enjoy the greatest percent of these heavy time users, 17% each. NYTimes.com has the third highest percent of audience using the site more than 60 minutes per month (12%). And Googlenews.com, in spite of a mission to quickly send users on to the sources that appear in search results, ranks fourth for this over an hour crowd (11%). Its users may leave to follow a link, but enough of its audience returns that their total minutes add up to more than an hour a month. Huffingtonpost.com is at the low end; just 6% of its users devote more than an hour each month to its content. 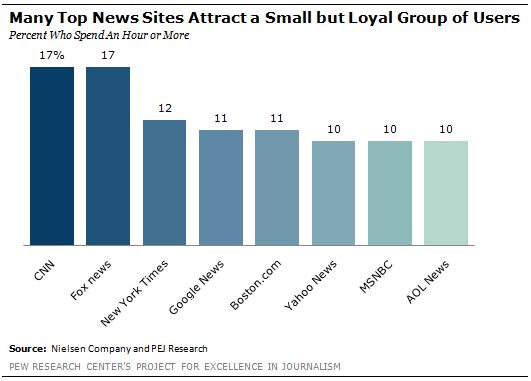 Next: Where Users Go When They Leave
← Prev Page
Page4Page5Page6Page7You are reading page8Page9Page10Page11Page12Page13Page14
Next Page →

Navigating News Online The Top 25 Who Drives Traffic to News Google Drives Most Users Facebook Is Becoming Increasingly Important Drudge Report: Small Operation, Large Influence Twitter
How Users Interact With News
How Users Spend Their Time with News Online
Where Users Go When They Leave Google: Parasite or Provider? The Importance of the Home Page Demographics About the Study Topline