One of the long-lingering questions in online news is whether Google is more a help or a hindrance to news producers? Does Google drive more traffic to a news site or pull more potential traffic away by offering users the headline and first paragraph on their Google News site and selling advertising against that content? According to the links users follow, Google News sends most users on to a news destination, but the range of those destinations is rather limited. 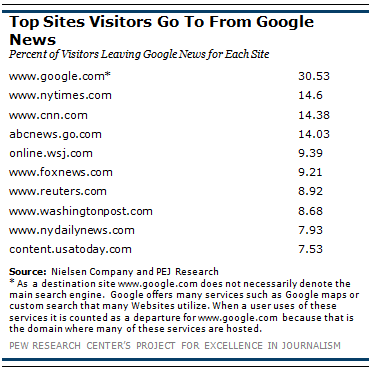 Most of visitors to Google News (not the larger search aggregator Google.com) do click to a news story. According to the data, less than a third of news.google.com visitors headed to Google.com or another Google service. The remainder followed a link to a news site.
But the benefactors are limited. Fully 69% of visitors to news.google.com ended up 3 places: nytimes.com (14.6%), cnn.com (14.4%) and abcnews.go.com (14.0%). Six additional sites were each the destination for 7-10% of visitors during the time period studied.

One site notably missing from this list is Facebook. Google News does not link people to content on Facebook. That makes a certain amount sense as Facebook is not a news site and thus would be very unlikely to a part of the search algorithm for news. But the relationship or lack thereof, works both ways. Few if any users come to Google News via Facebook. In other words, Facebook users are not posting Google News search results on their news feeds (Google does host some wire service content directly on their site so it is conceivable that Facebook users could link to these stories. But, according to this data, such instances are rare, if they even occur at all.) [1] This suggests that in the behavior on these sites, and perhaps the way the sites are built, Google and Facebook are increasingly set up as competitors sorting through the material on the Web. Google does so through the power of its search algorithms. Facebook does so through the power of affinity groups and peer sharing. They are two fundamentally different way to navigate the Web, and they are not, at least as of 2010, comingling with each other as much as other content sites mingle with both of them.

For many news creators, by contrast, there is a back and forth relationship with the social networking site. Again, these numbers are much smaller than the back and forth with Google. And users leaving sites for Facebook does not necessarily indicate that every visitor is leaving to share news. But it is likely that as least some of their audience is heading to Facebook to share the news content they have just seen. 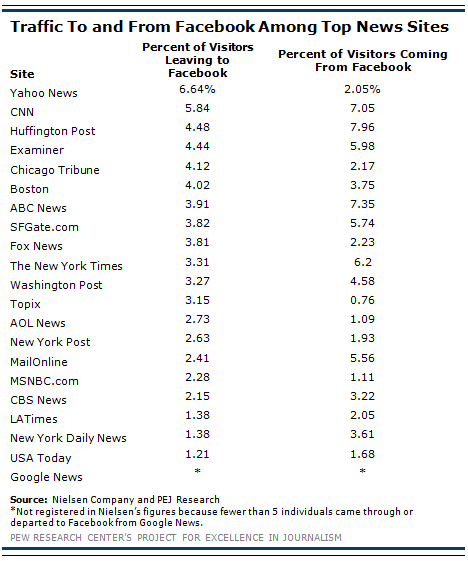 1. As noted earlier, at least 5 panelists need to exhibit a behavior over the course of a month for that behavior to register in their dataset.

Next: The Importance of the Home Page
← Prev Page
Page4Page5Page6Page7Page8Page9You are reading page10Page11Page12Page13Page14
Next Page →

Navigating News Online The Top 25 Who Drives Traffic to News Google Drives Most Users Facebook Is Becoming Increasingly Important Drudge Report: Small Operation, Large Influence Twitter How Users Interact With News Where Users Go When They Leave
Google: Parasite or Provider?
The Importance of the Home Page Demographics About the Study Topline