Facebook, the massive social networking site, has become a critical player in news. In 2010, all but one of the top sites for which there was referral data derived at least some of their audience through Facebook. The one exception was Google News, whose content links to other sites.

With roughly 500 million users worldwide, Facebook’s audience is vastly larger than any single news organization. Its role has evolved from a network for friends to share personal information to a way for people to share, recommend and link together all kinds of information, including news. If searching for news was the most important development of the last decade, sharing news may be among the most important of the next.

For five of the news Websites studied here, Facebook ranked as the second or third most popular driver to their content.  At the top was Huffingtonpost.com, which derived 8% of its traffic from links to Huffingtonpost.com content posted on Facebook. At the low end were AOLNews.com, MSNBC.com and the local aggregator Topix, which each derived 1% from Facebook.  The New York Times was near the higher part of the spectrum; 6% of its traffic came from Facebook.

These percentages represent only a fraction of the traffic coming from Google. But they make Facebook an influential and probably growing force. As Nielsen’s numbers show, few domains affect audiences this much. Now, the study suggests, Facebook is beginning to join Google as one of the most influential players in driving news audiences. 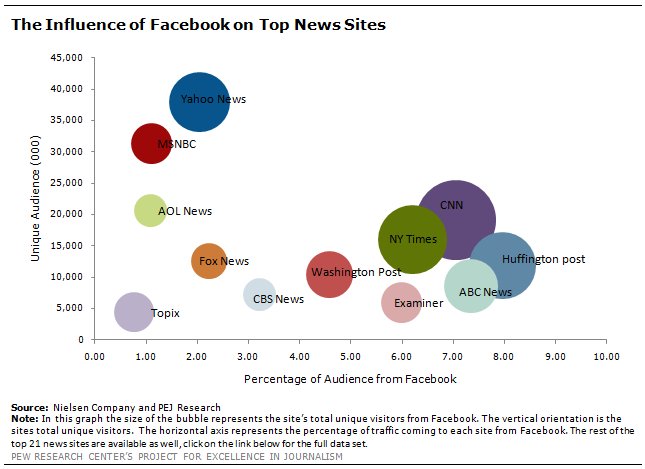 1.  For more on the social aspects of news, see “Understanding the Participatory News Consumer,” a study conducted by the Project for Excellence in Journalism and the Pew Internet & American Life Project.

Navigating News Online The Top 25 Who Drives Traffic to News Google Drives Most Users
Facebook Is Becoming Increasingly Important
Drudge Report: Small Operation, Large Influence Twitter How Users Interact With News Where Users Go When They Leave Google: Parasite or Provider? The Importance of the Home Page Demographics About the Study Topline