Most of the referrals stem from topic or news event-related searches like “Japan Tsunami” or “NCAA champion, men’s, 2011.” Also in the mix, though, are referrals from users who type in the name of a specific site or information source. According to Matthew Hindman of George Washington University, this latter behavior generally accounts for “a large minority of search behavior.” [1]

Google’s influence varies by the type of site. The two most popular aggregators of local news in the United States (as well as Google’s news aggregation site, Google News) depend on Google’s search engine for the majority of their traffic. [2] Topix.com, the top aggregator of purely local news (and the No. 20 news site overall), acquired almost two-thirds of its traffic from Google. Examiner.com, another local aggregator that also produces some of its own content (and the No. 17 news site overall), relied on Google for 52% of its traffic.

To legacy news sites with established prominent brands in their own right, Google was a less significant but still important source of audience. At these sites (which make up 15 of the top 21 sites for which there is referring data) Google represented an average of 28.4% of the traffic per site.

And that percentage was fairly consistent. ChicagoTribune.com came in at the low end (with 21.2%), and NYdailynews.com was at the high end (37%). 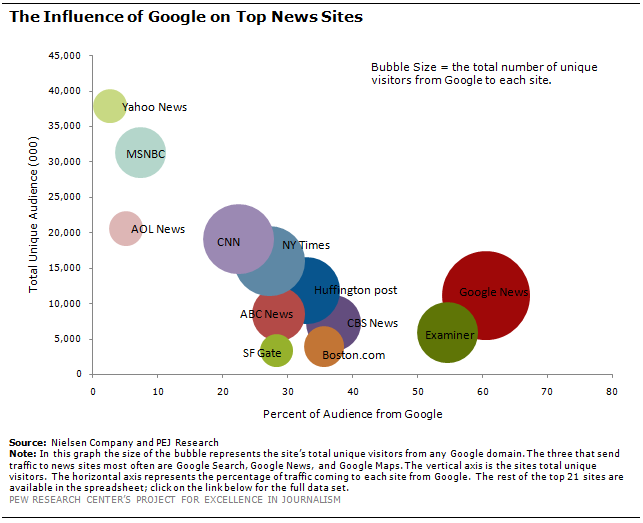 Google’s influence was smallest on those sites that are themselves aggregators or something close to it.  Yahoo (search and news combined), competes most directly with Google through its own search engine; it draws just 2.7% of its traffic from its rival Google. AOL and MSNBC do not have search engines but do offer email, news and a number of other online services; their news sites AOLnews.com and MSNBC.com drew 3.9% and 10% of their traffic, respectively, from Google. [3] This would suggest that if a company can become the provider of one service for consumers, say email or search, it tends to be the provider of choice for all the services it offers. AOL email users also use AOL for news. And it works the same way for Google which got less than 1% of its traffic from Yahoo’s search engine.

But Google is not the only way in which news content is discovered.

3. MSNBC.com, partially owned by Microsoft and partially by NBC Universal (recently acquired by Comcast), associates itself with Microsoft’s search engine, Bing. Bing is the default search engine on MSNBC.com

Navigating News Online The Top 25 Who Drives Traffic to News
Google Drives Most Users
Facebook Is Becoming Increasingly Important Drudge Report: Small Operation, Large Influence Twitter How Users Interact With News Where Users Go When They Leave Google: Parasite or Provider? The Importance of the Home Page Demographics About the Study Topline