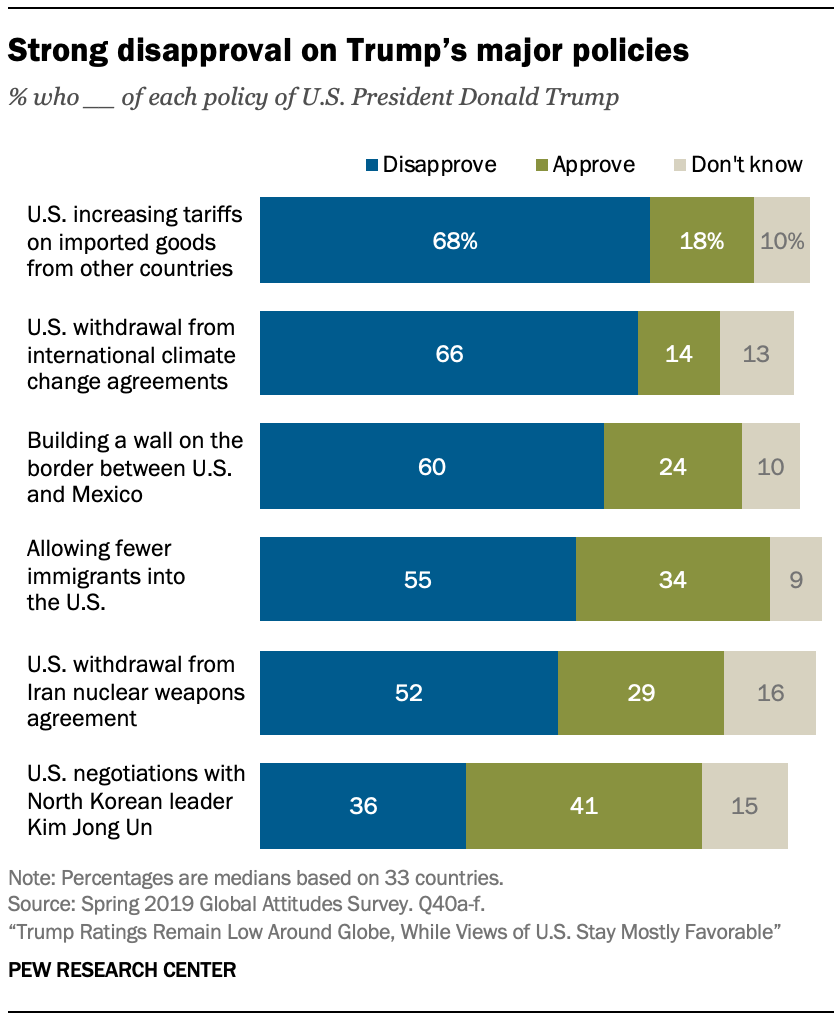 Overall, there is little support for several of Donald Trump’s signature foreign policies across the 33 countries surveyed in 2019.

Looking at the median levels of support across these countries, disapproval is strongest for Trump’s policies of the U.S. increasing tariffs or fees on imported goods from other countries, the U.S. withdrawal from international climate change agreements, and the U.S. building a wall on the U.S.-Mexico border. Fewer than half in all 33 countries surveyed approve of these policies.

Global publics also disapprove of the Trump administration’s policy of allowing fewer immigrants into the U.S. However, there is some support for the U.S. restricting immigration among Israelis and some publics in Central and Eastern Europe.

Additionally, most publics disapprove of the U.S. withdrawing from the Iran nuclear weapons agreement, but Israelis support this action. Israelis also support moving the U.S. Embassy to Jerusalem, while Tunisians, Lebanese and Turks strongly disapprove of this policy.

Trump garners strongest approval for his negotiations with North Korean leader Kim Jong Un over the country’s nuclear weapons program. This includes majority approval from people in Japan and South Korea, as well as Israel, the UK, the Netherlands, Australia, Poland and Germany.

Around the world, there is strong disapproval of Donald Trump’s policy of the U.S. increasing tariffs or fees on imported goods from other countries. Across the 33 countries surveyed, a median of 68% disapprove of this policy, while only 18% approve. Majorities or pluralities in every country surveyed disapprove of Trump’s tariff policy.

Majorities across much of the Middle East, Africa and Latin America also disapprove of the tariff policy, including 85% who disapprove in Mexico, historically one of the largest U.S. trading partners. The highest support for Trump’s trade policy comes from South Africa (40% approve), but even there, most disapprove.

As with overall confidence in Trump (see Chapter 1), those on the right of the ideological spectrum and supporters of right-wing populist parties in Europe show more approval of Trump’s tariff policy. Individuals with lower and higher incomes disapprove of the tariff policy relatively equally across most of the countries surveyed.

Majorities or pluralities in all 33 countries surveyed disapprove of the Trump administration’s intent to withdraw from international climate change agreements. Trump first announced the decision to pull out of the Paris climate accord in June 2017 but recently made the decision official. A median of 66% across the 33 countries disapprove of this action and 14% approve.

Disapproval of Trump’s defining climate change policy is particularly strong in Europe, where a median of 78% disapprove. This includes about nine-in-ten who disapprove in France, Germany, Sweden and Spain.

Around eight-in-ten South Koreans (82%) and Australians (78%) also disapprove of the U.S. withdrawal from climate accords. And more than half across Middle Eastern, African and Latin American countries surveyed disapprove as well. Even in Israel, which shows general support for several of Trump’s policies, 59% disapprove of pulling out of the international climate accords.

There has been minimal change on overall opposition to Trump’s climate policies since 2017 across most of the countries surveyed. However, support for pulling the U.S. out of the climate agreement rose in the Philippines and Mexico (+14 percentage points) and fell in Russia (-17 points). Still, now as with then, most disapprove of the policy.

People with less education and those on the right politically tend to show more support for Trump’s climate policies. And despite recent large-scale protests about climate among the world’s youth population, both young and old tend to disapprove of the U.S. withdrawal from major climate change agreements at similar rates.

Across the 33 nations polled, a median of six-in-ten disapprove of building a wall on the border of the U.S. and Mexico, one of Trump’s well-known campaign promises.

Latin Americans are among the most opposed to building the wall, including 90% of Mexicans themselves. Canadians also overwhelmingly disapprove.

Opposition to the wall is also very high in Western Europe, where more than eight-in-ten in Spain, Germany, Sweden, France and the Netherlands disapprove of the policy. There is also strong displeasure across the Asia-Pacific with building a wall at the southern U.S. border (a median of 64% disapprove). Pluralities in most Middle Eastern and African countries also oppose the policy.

There is somewhat more support for the wall in Israel, Slovakia, Hungary and Kenya, but fewer than half in all countries surveyed say they approve of the project. 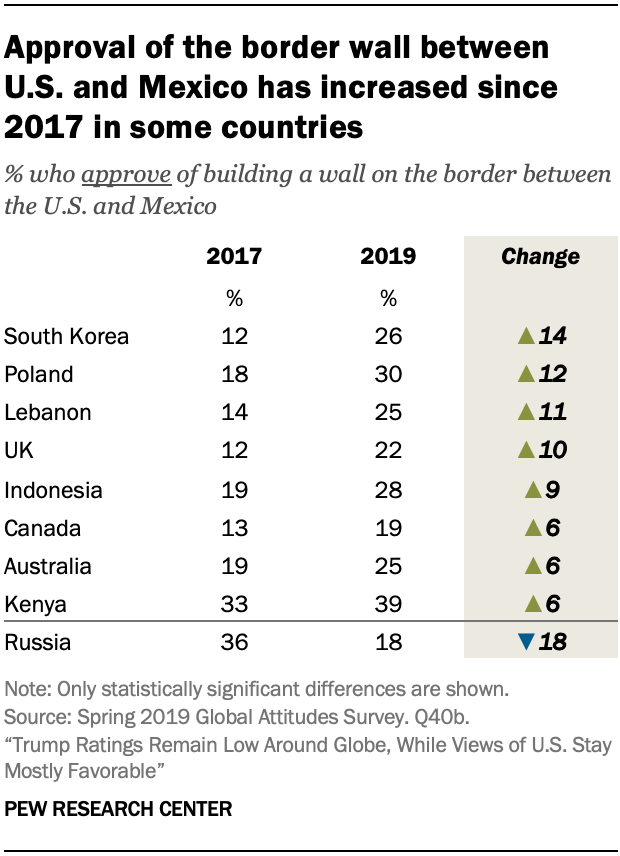 Since 2017, there has been significant upward movement in approval for building the wall in eight countries surveyed. For example, South Koreans are 14 percentage points more likely to approve of building the wall than they were in 2017. However, even though support has grown in these countries, majorities or pluralities in each one still disapproves of the wall. Meanwhile, support for building a wall has halved in Russia over the same time period.

As with other Trump policies, those with a more right-leaning ideology tend to be more supportive of building a wall on the U.S.-Mexico border.

Additionally, those who support right-wing populist parties in Europe are far more likely to support a wall than those who are nonsupporters. For example, UKIP supporters in the UK are more than three times as likely to favor a wall between the U.S. and Mexico as are nonsupporters. Differences of this nature also occur among supporters and nonsupporters of Party for Freedom and Forum for Democracy in the Netherlands, National Rally in France, Alternative for Germany in Germany, Sweden Democrats in Sweden, Fidesz in Hungary, Freedom and Direct Democracy in the Czech Republic, Vox in Spain and Lega in Italy. 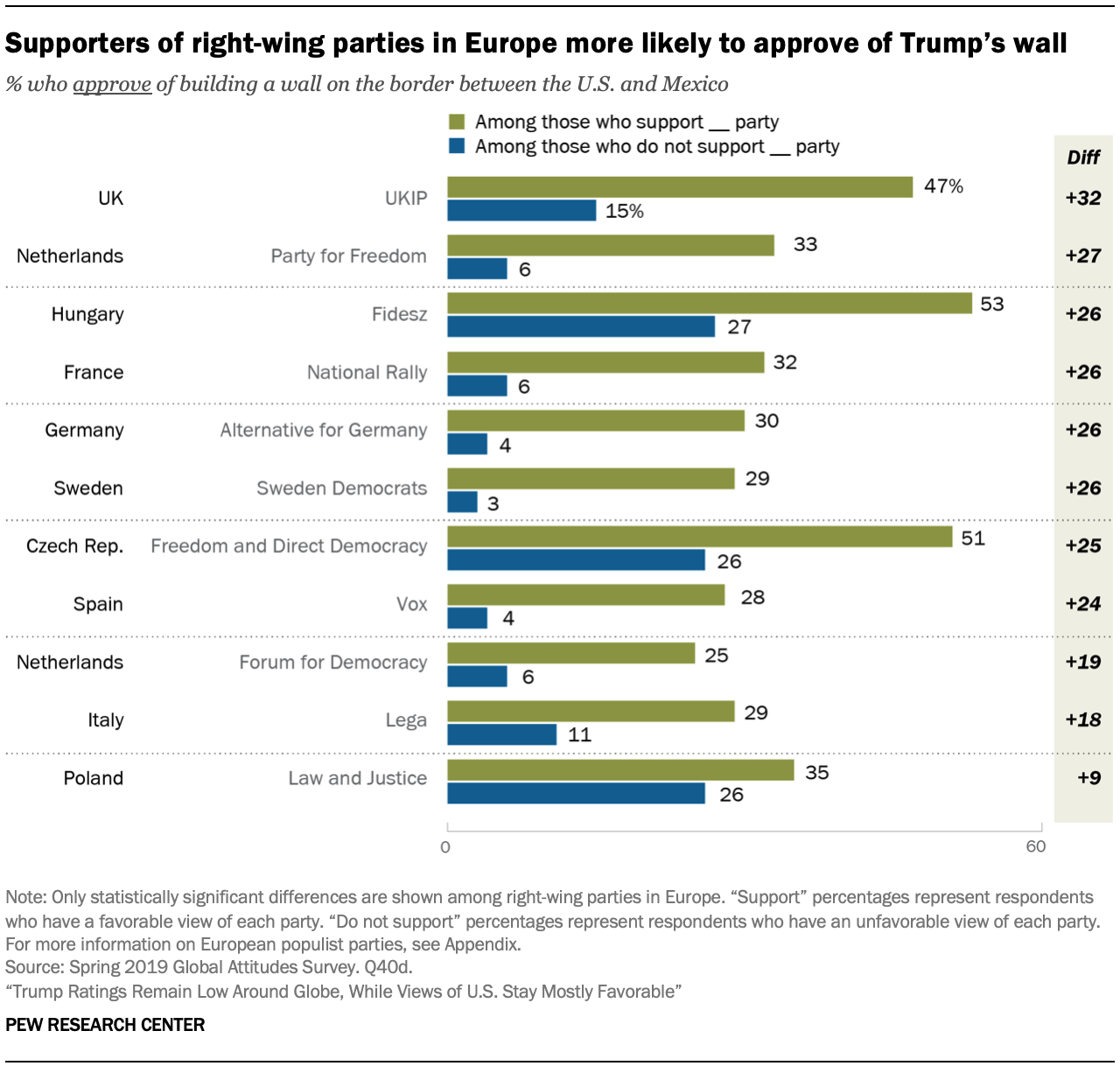 Across 33 countries, most disapprove of Trump’s policies to allow fewer immigrants into the U.S., but there are notable exceptions.

In Europe, for example, a median of 51% disapprove of the policy, but this masks relative support among many Central and Eastern Europeans for restricting immigration into the U.S. While majorities in Sweden, Germany, Netherlands, France, Spain and the UK oppose Trump’s immigration policy, about half or more in Hungary, Slovakia and Poland (as well as a plurality in the Czech Republic) approve.

Most in Asia-Pacific, Middle East and North African and Latin American countries disapprove of restricting immigration into the U.S. One clear exception is in Israel, where 58% support Trump’s policy of limiting migrants, the highest such support across the survey.

There are consistent demographic patterns on this question as well, with ideologically right-oriented respondents expressing more approval than those on the left in most countries. For example, six-in-ten of those who place themselves on the right end of the ideological spectrum in Italy say they approve of Trump’s immigration policies, vs. only 26% among left-leaning Italians.

In a few countries, those in rural areas are also more likely to support restricting immigration into the U.S., including in the UK, where 41% who live in rural areas support the policy compared with 24% in urban areas.

But even more so than other issues, the divide on U.S. immigration policy between Europe’s supporters of right-wing populist parties and nonsupporters is stark. For instance, supporters of Marie Le Pen’s National Rally in France are roughly three times as likely to favor allowing fewer immigrants into the U.S. as are nonsupporters. 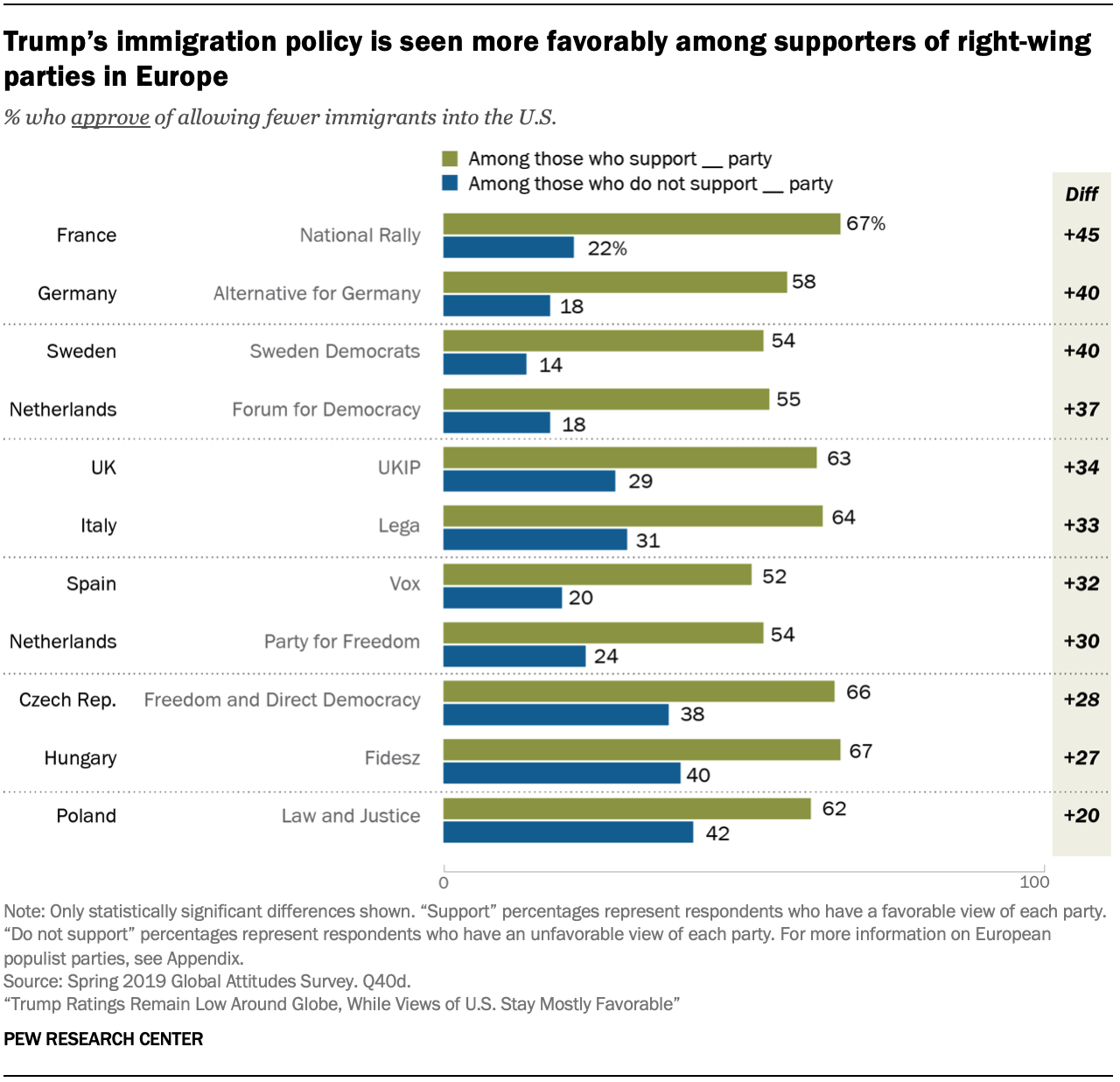 In most countries surveyed, majorities or pluralities disapprove of the U.S. withdrawal from the Iran nuclear weapons agreement (also known as the Joint Comprehensive Plan of Action or JCPOA), which was signed in 2015 by the five permanent members of the UN Security Council and Germany, known as the P5+1. President Trump withdrew the U.S. from the agreement in May 2018, after which sanctions were reimposed on Iran for its weapons development programs and support for militant groups.

Across Europe, a median of 52% disapprove of this action and no more than about a third in any European country approve of Trump’s Iran policy. However, this particular policy is less well-known than some of the others tested, and substantial portions of the population in many countries do not express an opinion.

Similarly, in Asia-Pacific countries, there is general disapproval of this action, but many in India do not hold an opinion. On balance, there is also disapproval of Trump’s Iran policy in the sub-Saharan African and Latin American countries surveyed.

In the Middle East and North Africa, attitudes are more mixed, with mild disapproval for the U.S. withdrawing from the Iran agreement in Turkey, Tunisia and Lebanon, but strong support from Israelis (66% approve). Among Jewish Israelis, 75% approve of the U.S. withdrawal from JCPOA, compared with only 28% of Arab Israelis.

Far fewer in Russia approve of the withdrawal from the JCPOA (Russia is one of the P5+1 countries) than did in 2017, when equal numbers approved and disapproved of the policy (38%). In the other P5+1 countries surveyed (France, UK, Germany), there has been little change for approval on Trump’s Iran policy since 2017. In a few other countries, namely Tunisia, Lebanon, Hungary and Brazil, support for the Iran policy has also dropped by double digits since 2017. 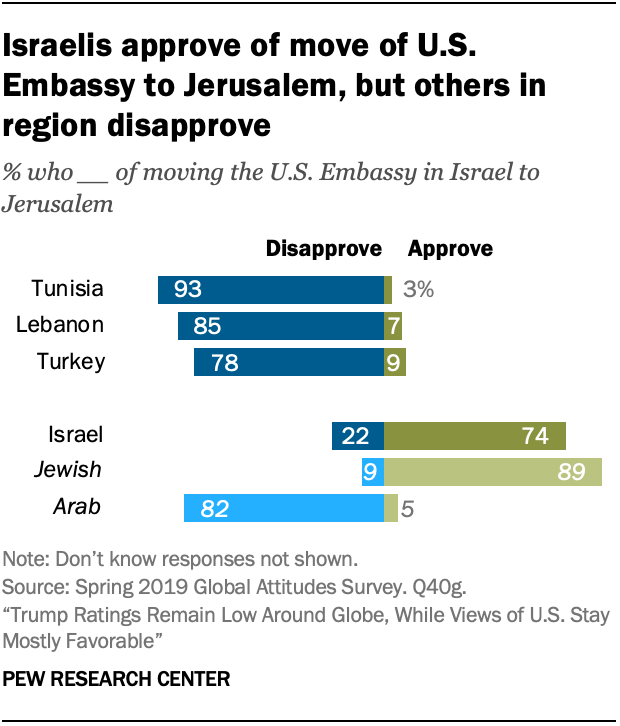 In three Middle East and North African nations, extremely large majorities disapprove of Trump’s decision to move the U.S. Embassy in Israel to Jerusalem from Tel Aviv. This includes 93% of Tunisians, 85% of Lebanese and 78% of Turks.

In Israel itself, however, 74% approve of Trump’s decision, while only 22% disapprove. However, 82% of Arab Israelis disapprove of the policy as 89% of Jewish Israelis approve.

Of all of Trump’s foreign policies asked in the survey, his direct negotiations with North Korean leader Kim Jong Un garners the most support. Still, only a median of 41% across the 33 countries surveyed approve of this action, compared with 36% who disapprove.

Roughly half or more in 11 of the 33 countries approve of Trump’s negotiations with Kim Jong Un over North Korea’s nuclear weapons program, which culminated in a historic meeting between the two leaders in Singapore on June 12, 2018. This includes 80% in Japan and 78% in South Korea, two countries that have the potential to be most impacted by North Korea’s missiles and nuclear weapons arsenal. Additionally, 62% in Australia approve of Trump’s North Korea talks.

In Europe, majorities in the UK, the Netherlands and Germany approve of the negotiations, the only Trump policy in each of those nations that has such support. Trump also received high levels of support from Poles, Swedes and Israelis on this policy.

In the Middle East, Africa and Latin America, there is general disapproval of Trump negotiations with Kim, or in many cases, large shares of the population hold no opinion.

Gender is a factor in opinion of Trump’s negotiations with the North Korean leader over his nuclear weapons program. Men are significantly more likely than women to approve of Trump’s North Korea talks in 23 of the 33 countries surveyed. This includes double-digit gender gaps across most of Europe, Canada, Australia and Latin America. However, in many of the countries surveyed women are significantly more likely than men to not answer the question.

Next: 3. U.S. image generally favorable around the world, but mixed in some countries
← Prev Page
Page1Page2You are reading page3Page4Page5Page6Page7
Next Page →