Ratings for U.S. President Donald Trump’s handling of world affairs are largely negative around the world, and opinions on this matter have remained relatively stable since he took office in 2017.

A median of 29% across 32 countries surveyed express confidence in Trump to do the right thing in world affairs. As in previous years of his presidency, trust is lowest in Mexico. Argentines and Brazilians generally lack confidence in the president as well, though both countries have seen a roughly 10 percentage point increase in the share holding this opinion since 2018.

Confidence in the U.S. president is also low in every European country surveyed except one: Roughly half of Poles have faith in Trump to do what is right in international affairs. Poland is also the only European country of those consistently surveyed in the past three years to show an increase in confidence each year. In 2017, only 23% of Poles viewed Trump positively. (Polish President Andrzej Duda visited the U.S. in early June of 2019, while the survey was in the field, and the two leaders announced a plan to strengthen the military relationship between their countries.)

Perceptions of Trump are more positive in general in the Asia-Pacific, the Middle East and Africa compared with Europe, though opinions vary across the countries surveyed in these regions. Majorities in the Philippines, Israel, Kenya, Nigeria and India have confidence that the president will do the right thing in world affairs. Yet few in Japan, Australia, Lebanon, Tunisia and Turkey share this view. 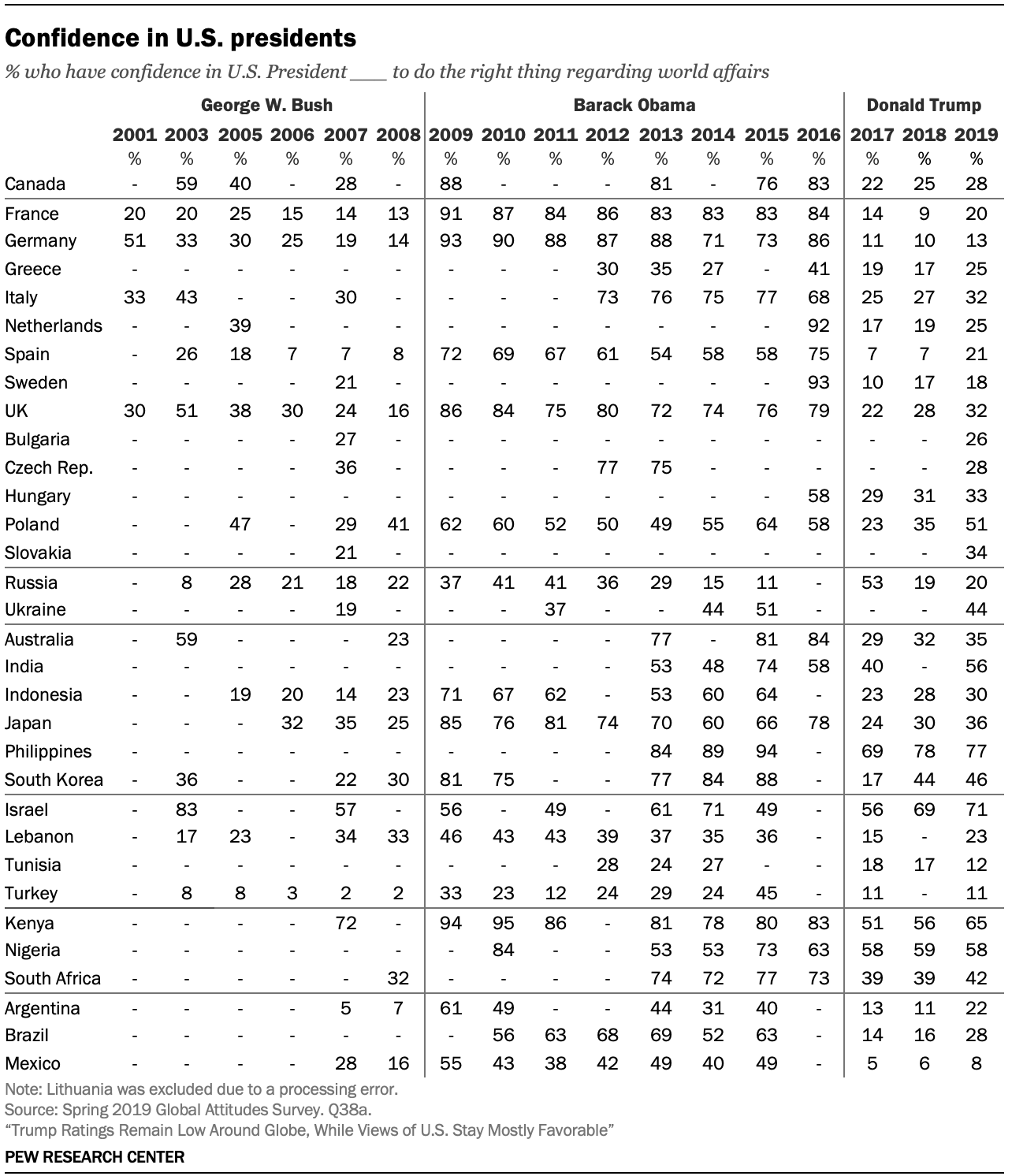 Views of Trump vary by age in several of the countries surveyed, but the difference is not always in the same direction. In Australia and the Western European countries of the UK, Greece, France and Germany, adults ages 50 and older are more likely than younger adults to see Trump in a positive light. In contrast, younger adults have more confidence in the president than older adults in Slovakia, Bulgaria and Russia.

In 12 countries, men are more likely than women to rate Trump positively. For example, 28% of men in Sweden have confidence in the president, compared with only 8% of women. Significant gender differences can also be found in Brazil, Australia, Japan, the UK, Canada, the Netherlands, Argentina, Spain, South Korea, France and Germany. In Tunisia, women (15%) are more likely than men (9%) to trust Trump. 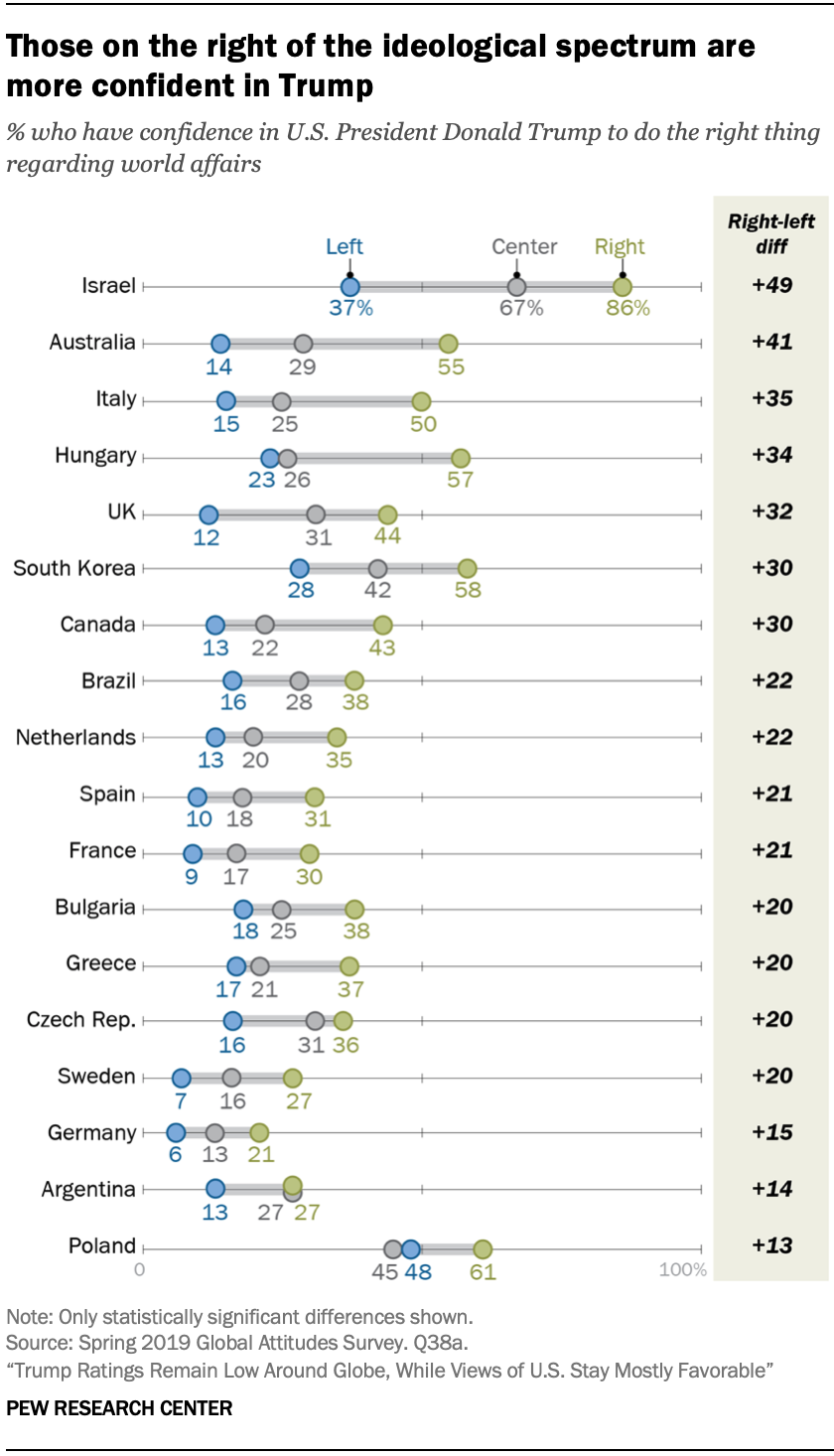 Self-placement on the ideological spectrum is also associated with views of Trump in nearly every country where ideology was measured. Those on the right are much more likely than those on the left to trust Trump’s handling of international affairs.

In some countries, this ideological divide is particularly sharp. For example, there is an almost 50 percentage point difference between those on the right in Israel – most of whom have faith in the U.S. president – and those on the left. Differences of 20 points or more can also be seen in most of the European countries surveyed, as well as Australia, South Korea and Brazil. 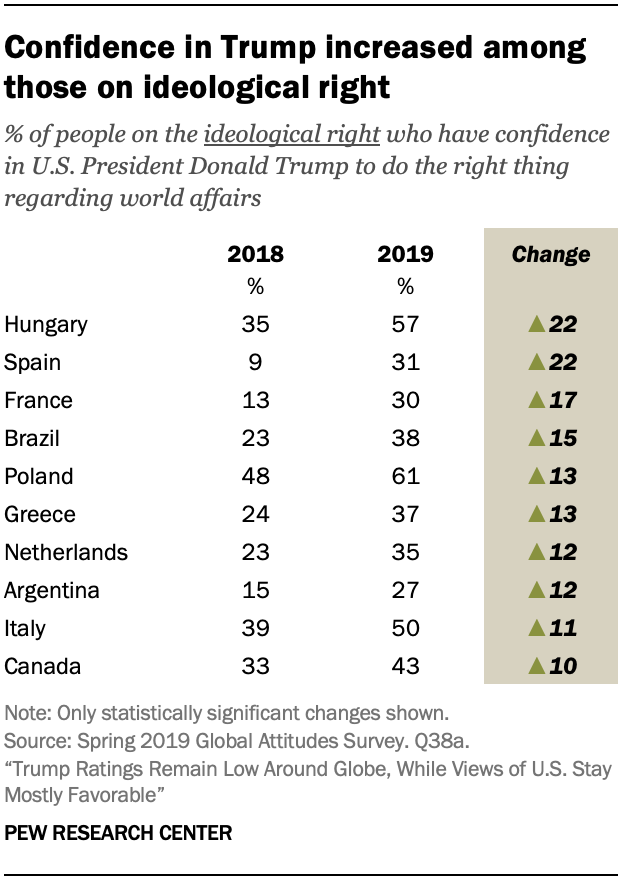 In several countries, people who place themselves on the right of the ideological spectrum have gained confidence in Trump since 2018.

Hungarians on the political right have shown the largest increase in trust. In 2018, only around a third of those on the right in Hungary had confidence in the U.S. president. In 2019, a majority in this group believe Trump would do the right thing in international affairs.

A similar pattern can be seen in many European countries, including Spain, France, Poland, Greece, the Netherlands and Italy. Confidence in Trump has also increased among Brazilians, Argentines and Canadians on the right of the political spectrum. Confidence has remained largely the same since 2018 among people on the left in most countries. 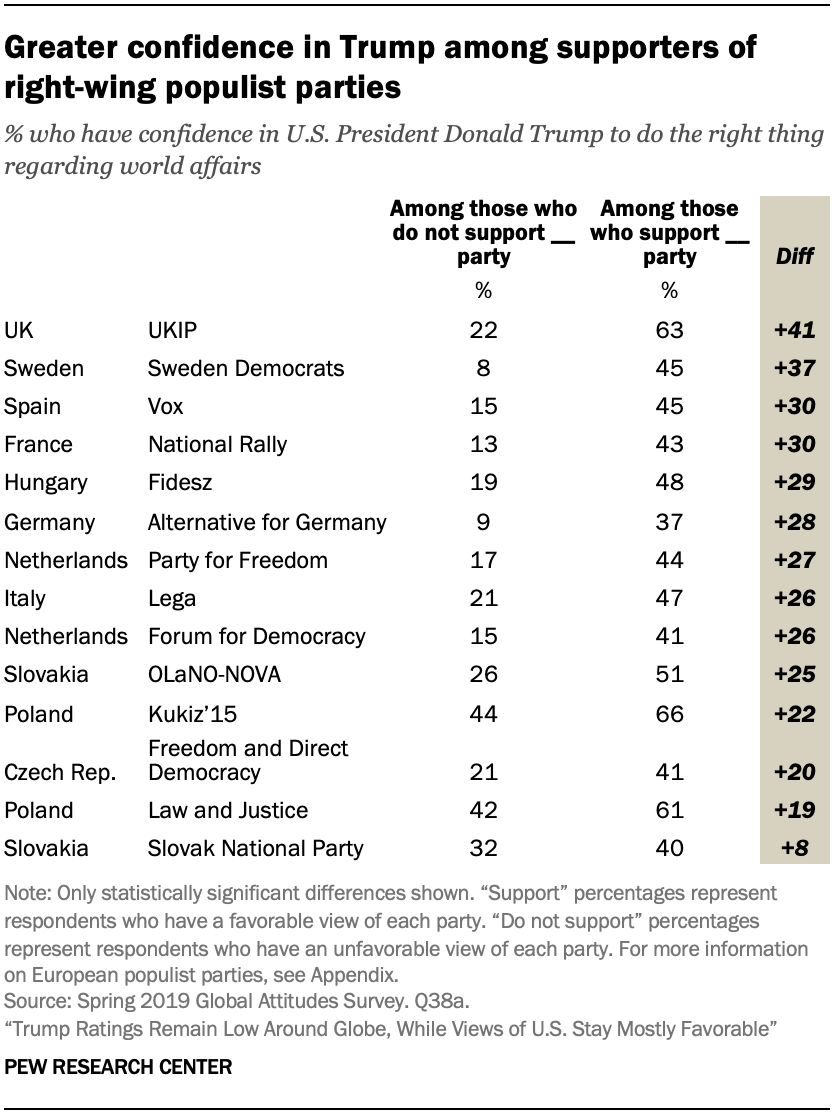 Consistent with broader ideological differences, people who hold a favorable view of right-wing populist parties in Europe are more likely than those with an unfavorable view to give Trump positive ratings.

Those with differing views of UKIP in the UK deviate the most in their views of Trump.3 More than three-in-five UKIP backers express confidence in the U.S. president, compared with roughly one-in-five among those who have a negative view of the party. Similarly, people with favorable views of Sweden Democrats, Vox in Spain, National Rally in France and Alternative for Germany (AfD) are at least three times as likely as others to trust Trump.

In contrast, attitudes toward center or left-wing populist parties are not associated with views of Trump. The exception is among those with differing opinions of ANO 2011 in the Czech Republic, a party that generally falls in the center politically. People who view ANO 2011 positively (34%) are significantly more likely than those with a negative view of the party (22%) to trust Trump in international affairs.

Views of the U.S. president are closely linked to attitudes toward the United States as a whole, both at an individual level and across countries. In nearly every country surveyed, people with a favorable view of the U.S. are more likely than those with an unfavorable view to have confidence in the U.S. president. Similarly, countries with a higher share who view the U.S. positively tend to have more people who trust the president to do what is right in foreign affairs. For example, the two countries with the most confidence in Trump – Israel and the Philippines – are also among the most favorable toward the U.S. 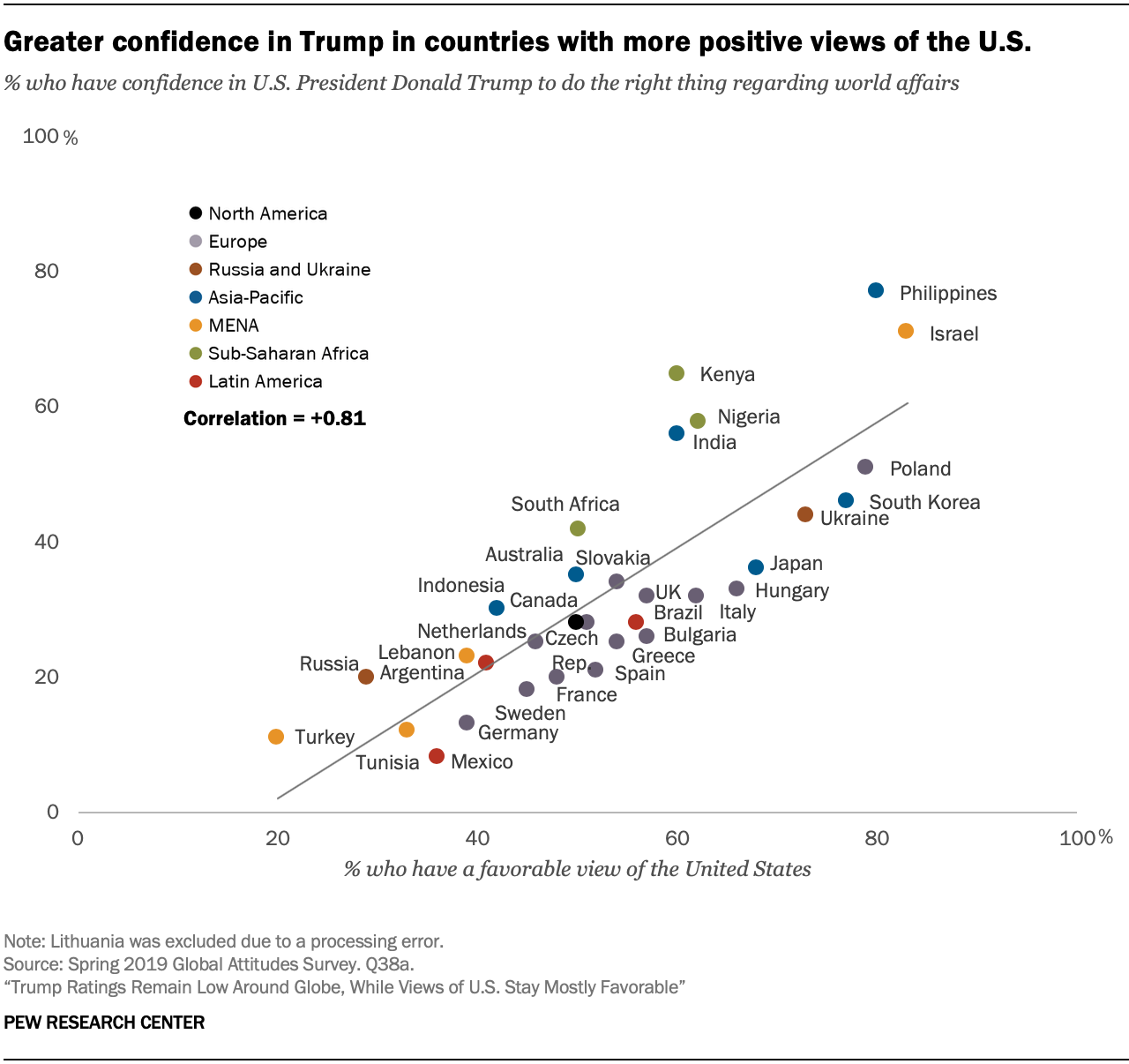 Across the countries surveyed, many believe Merkel would do the right thing in world affairs (median of 46%). Majorities in 13 countries express confidence in the German chancellor, including 86% in Sweden, 82% in the Netherlands and 74% in both Germany and France. Publics in some other European countries hold much less positive views of Merkel, however. Only around a quarter in the Czech Republic and Greece trust her, some of the lowest shares in the survey. 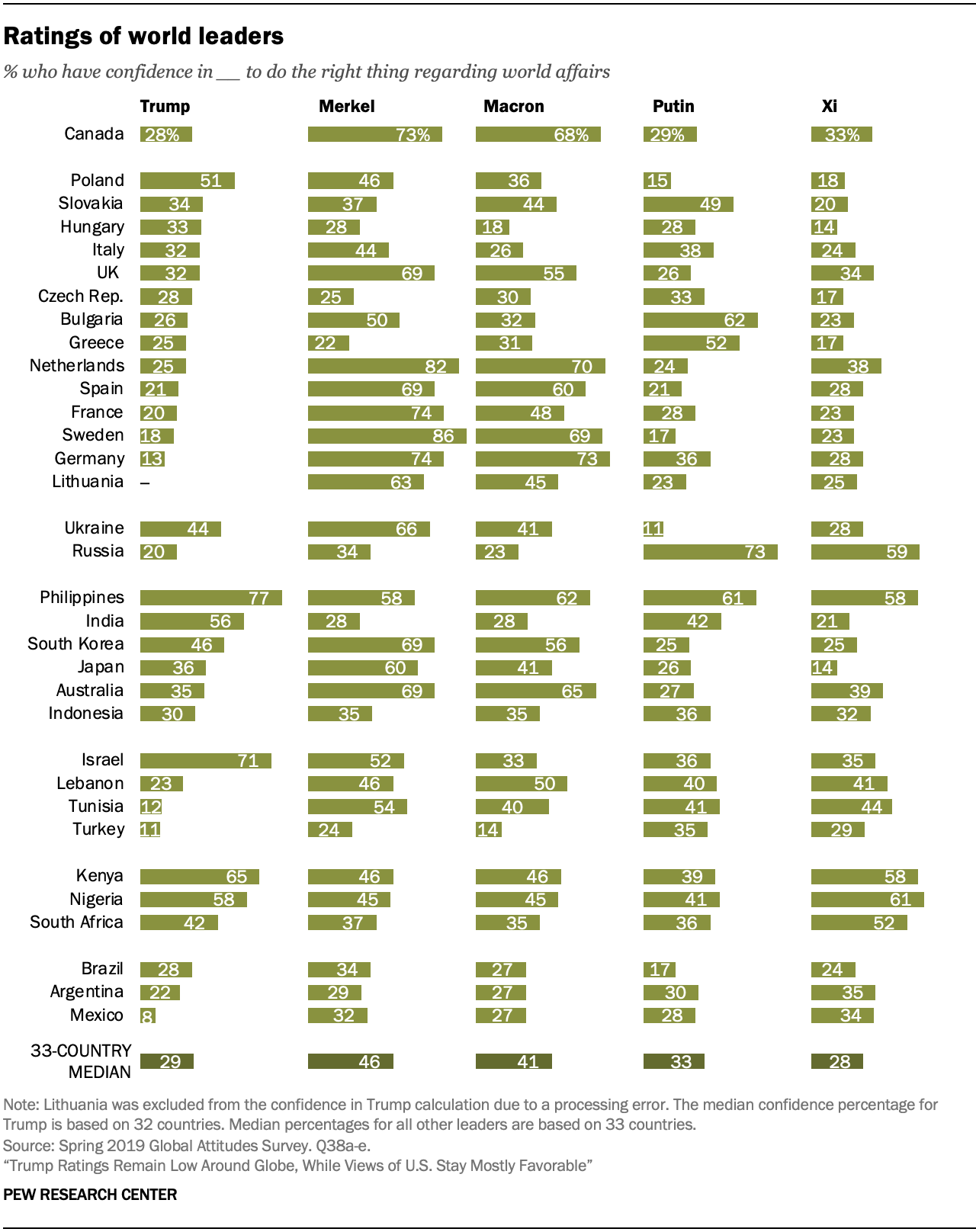 As is the case with Merkel, confidence in Macron is highest in Germany, the Netherlands and Sweden. Fewer people in Macron’s home country of France say they trust their leader’s handling of world affairs (48%).

Putin garners the most positive reviews from Russians; 73% are confident that their leader would do what is right in world affairs. Roughly half or more in Bulgaria, the Philippines, Greece and Slovakia agree. Yet few in other countries express trust in the Russian leader. Only 15% in Poland and just 11% in Ukraine have confidence in Putin’s approach to international affairs.

Publics in most of the countries surveyed lack confidence in Xi Jinping. His highest ratings come mostly from countries in Africa and the Middle East, including 61% in Nigeria, 58% in Kenya, 52% in South Africa, 44% in Tunisia and 41% in Lebanon. Filipinos and Russians generally voice confidence in the Chinese president as well.

Many publics express the least confidence in Trump of any world leader asked about. For example, four-in-ten or more in Tunisia trust Merkel, Xi, Putin and Macron to do the right thing in international affairs, but only 12% trust Trump. Similarly, roughly three-in-ten Mexicans have confidence in the leaders of China, Germany, Russia and France, compared with 8% who have confidence in the U.S. president. Overall, Trump falls at the bottom of the list in about one-third of the countries surveyed. The same is true for Presidents Putin and Xi.