Views of the U.S. are generally positive across 33 countries surveyed in 2019, as a median of 54% say they have a favorable opinion of the U.S., compared with 38% who have an unfavorable view. Ratings are particularly positive in Poland, the Philippines, South Korea and Israel – in each about eight-in-ten say they view the U.S. favorably. However, in Germany, Russia, Turkey and Mexico, a majority of people say that they have a negative view of the U.S.

Across the 14 European countries surveyed, views of the U.S. are generally positive (a median of 54% favorable vs. 40% unfavorable). However, the extent to which publics view the U.S. favorably ranges considerably in Europe, from 79% in Poland to 39% in Germany expressing a positive view.

Across the countries surveyed in the Asia-Pacific region, views of the U.S. are positive, albeit more mixed in Australia. Views are also more mixed in Indonesia, where people are more likely to not give a response as to whether they favor the U.S. or not. In the Philippines and South Korea, about eight-in-ten say they have a favorable view of the U.S. And 68% in Japan and 60% in India say they like the U.S. (29% in India also offer no opinion).

Sentiment toward the U.S. varies more across the four Middle East and North African countries surveyed. Views are particularly positive among Israelis, but there is a sharp ethnic split in the country; among Jewish Israelis, 94% express a favorable opinion of the U.S., compared with only 38% of Arab Israelis. Views tend to be more negative in Lebanon, where only 39% of the total population views the U.S. positively. About half of Christians in that country (51%) view the U.S. positively, compared with 41% of Sunni Muslims and only 11% of Shia Muslims.

Across the three sub-Saharan African countries surveyed, views of the U.S. tilt positive, though somewhat less so in South Africa, where half have a favorable view. In Nigeria and Kenya, more than half (62% and 60% respectively) say they view the U.S. positively. Christians in Nigeria have a more favorable opinion of the U.S. (69%) than do Muslims (54%).

Opinions are more mixed in Latin America, with a majority in Brazil holding a positive view (56%) but a majority in Mexico viewing the U.S. negatively (55%). In Argentina, views are nearly evenly split, as about four-in-ten each say they have favorable and unfavorable view.

Positive assessments of the U.S. rose in some countries from 2018 to 2019, particularly among right-leaning people 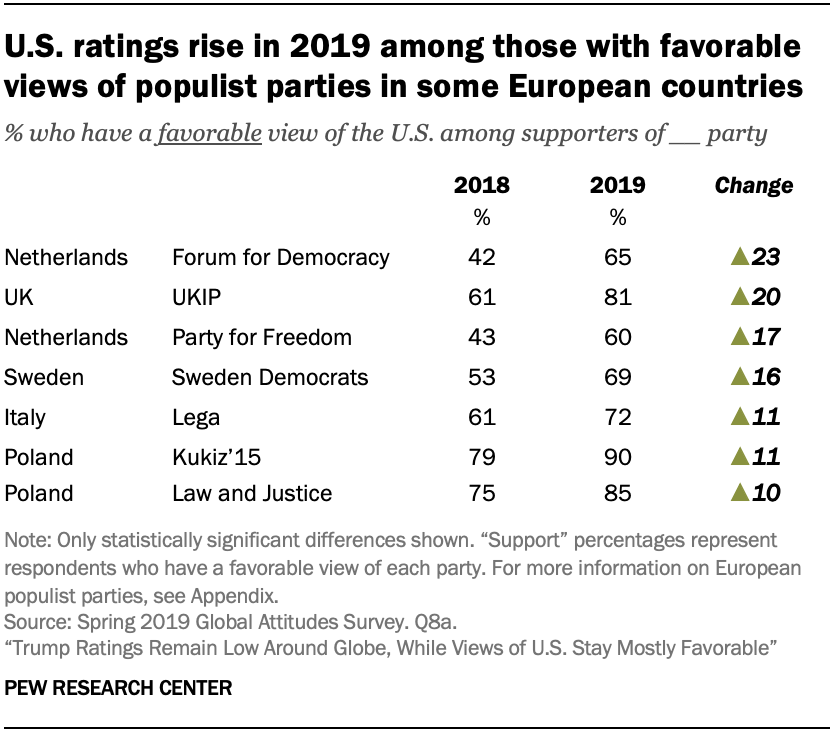 In some countries, views of the U.S. have become more positive since 2018. This increase in favorable views of the U.S. is especially prevalent among those who favor right-wing populist parties or place themselves on the right end of the ideological spectrum.

In Europe, positive regard for the U.S. increased among those who favor right-wing populist parties, but the extent to which there has been an increase varies across countries. In the Netherlands, for example, about two-thirds (65%) of those who favor Forum for Democracy (FvD) said they have a favorable view of the U.S., compared to only 42% who said the same in 2018. Similar increases in U.S. favorability since 2018 have come from people who support UKIP in the UK, Party for Freedom (PVV) in the Netherlands, Sweden Democrats in Sweden, Lega in Italy and both Kukiz’15 and the ruling Law and Justice (PiS) in Poland. 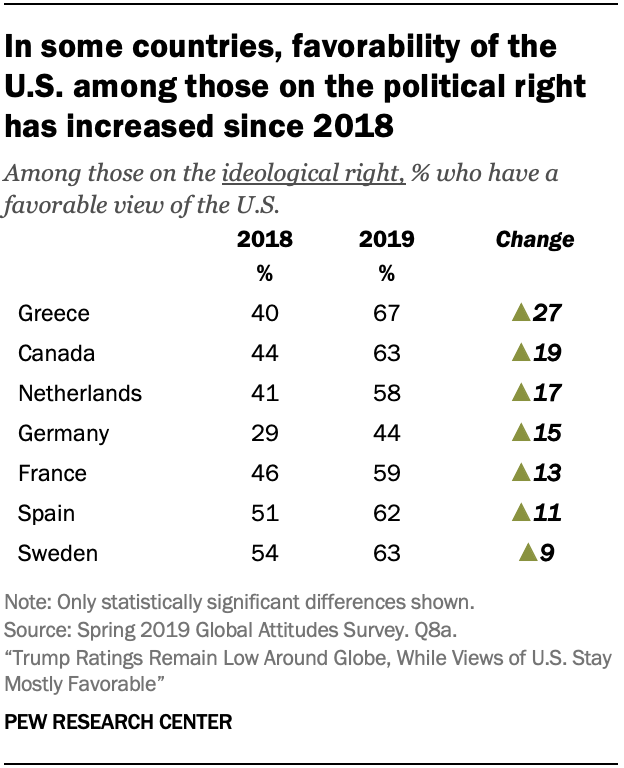 Positive sentiment for the U.S. has similarly increased among those who place themselves on the right of the political spectrum in some countries from 2018 to 2019. This change is greatest in Greece, where four-in-ten of those on the political right said they had a favorable view of the U.S. in 2018 compared with two-thirds in 2019, a 27 percentage point change. Other countries including Canada, the Netherlands, Germany, France, Spain and Sweden saw significant shifts among those on the right. 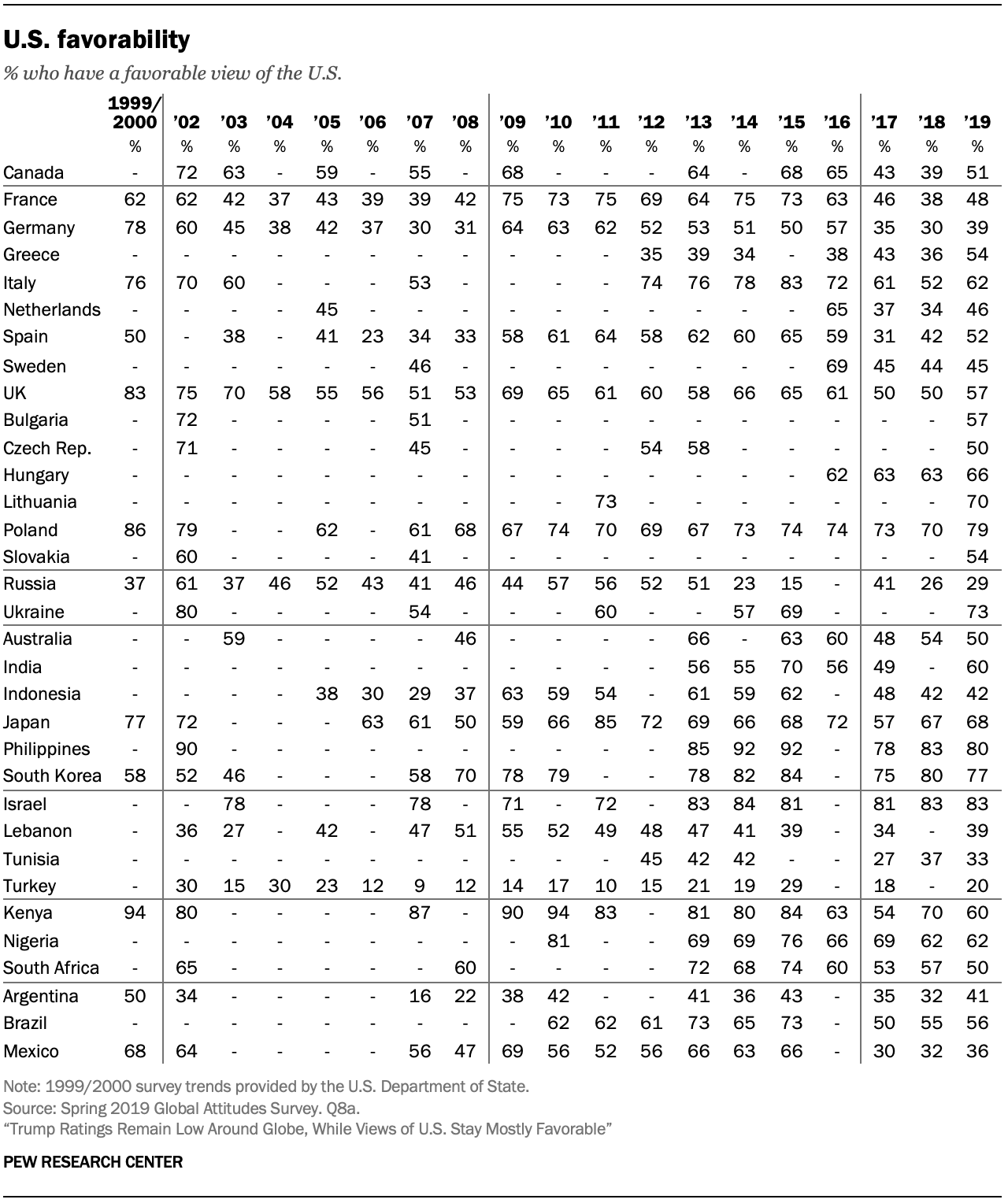 In many countries, younger people have a more favorable view of the U.S. 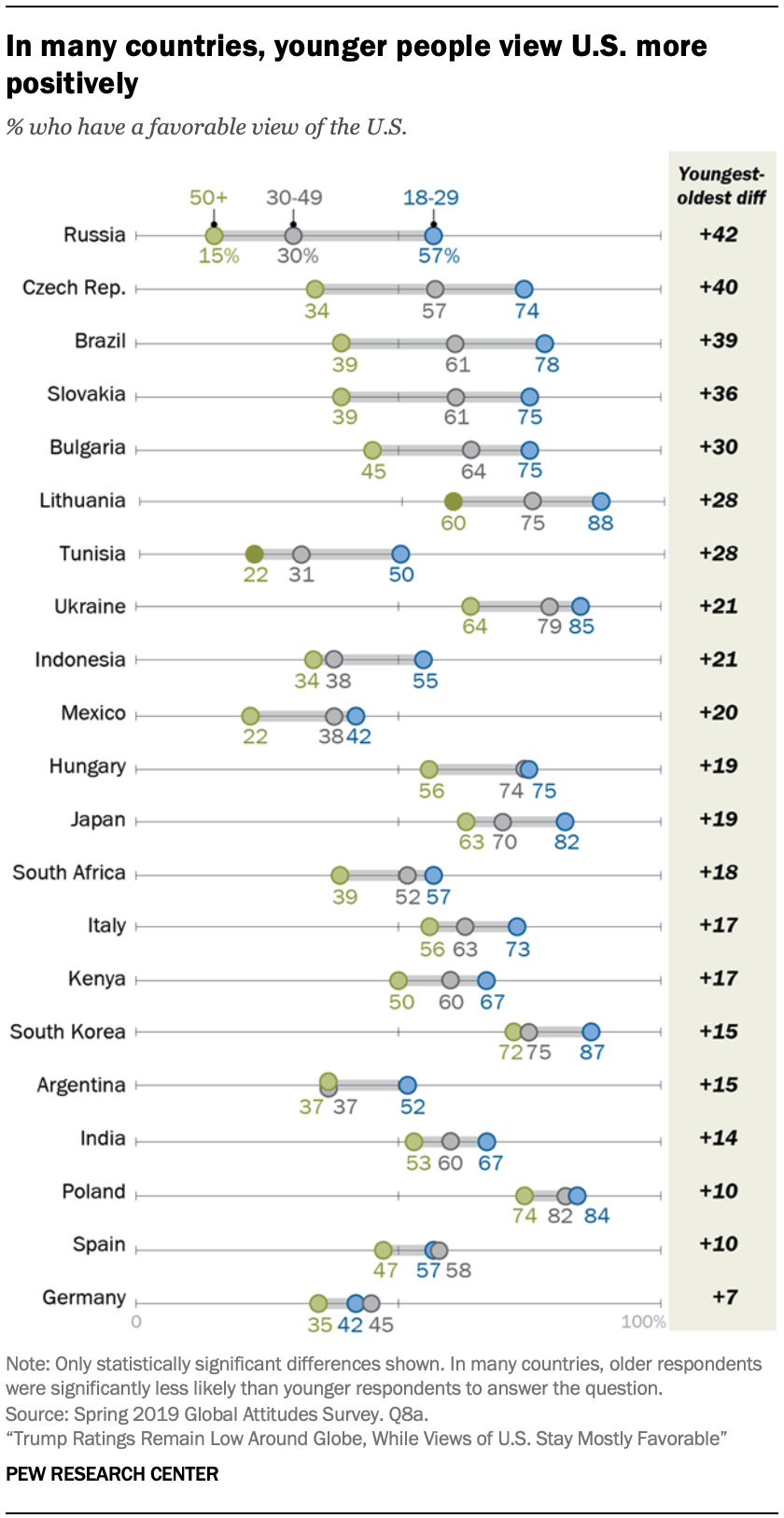 As has been the case in previous surveys, young people tend to express more positive opinions about the U.S. In 21 of the 33 countries surveyed, those ages 18 to 29 have a more favorable view of the U.S. than people 50 and older.

The largest differences between the youngest and oldest tend to be found in formerly communist countries, including Russia, the Czech Republic, Slovakia, Bulgaria, Lithuania, Ukraine and Hungary. In these countries, the difference between the youngest and oldest is at least 19 percentage points. For example, in Russia, 57% of those 18 to 29 have a positive view of the U.S., compared with only 15% of those 50 and older.

In some countries there are also significant differences between men and women in assessments of the U.S. The country with the greatest difference is Aus 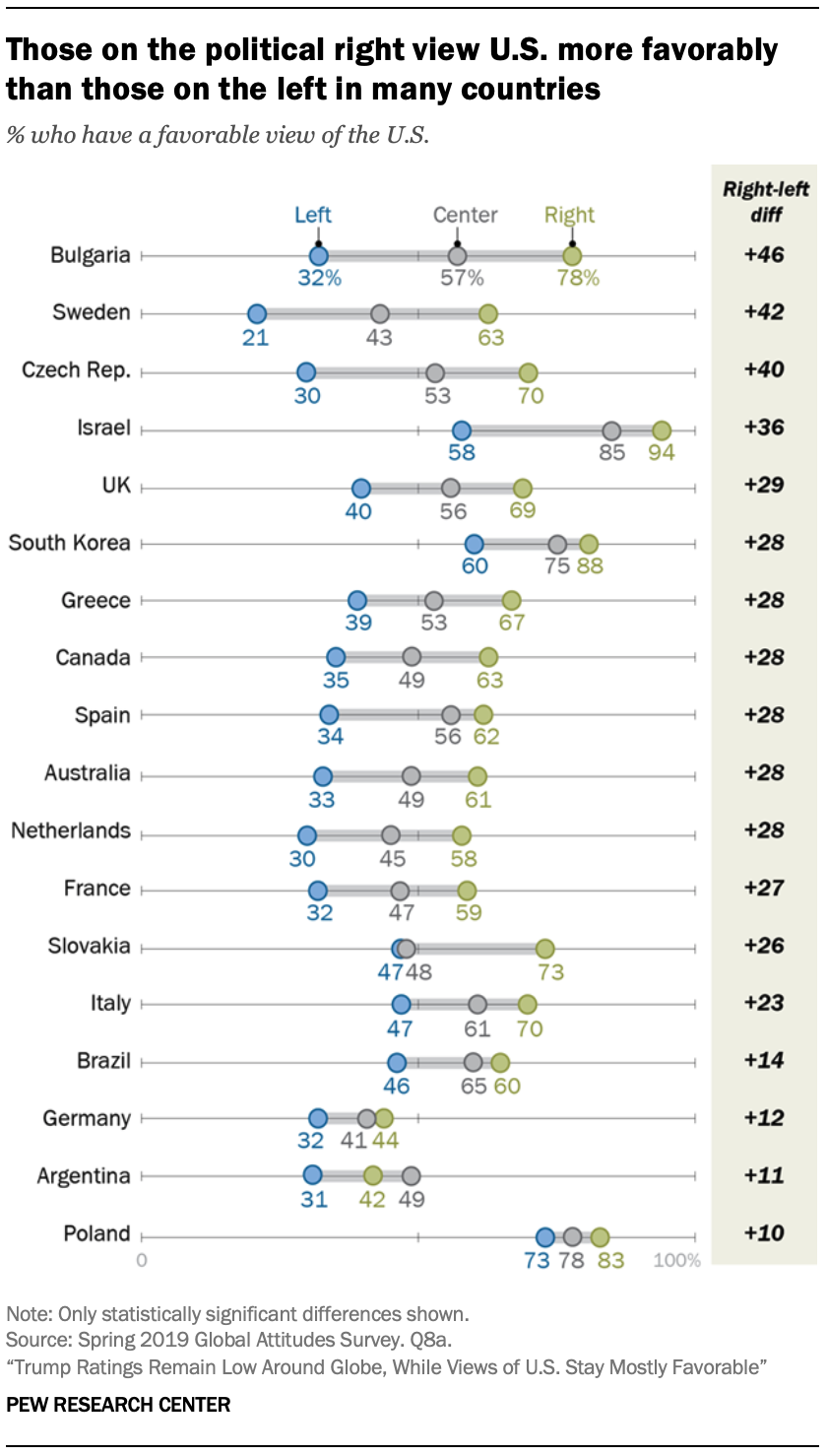 The difference between those on the political left and political right is especially stark in some countries. For example, 78% of Bulgarians on the political right say they have a positive view of the U.S., whereas only 32% on the left do, a 46 percentage point difference. Differences between these groups are also greater than 30 percentage points in Sweden (42 points), the Czech Republic (40 points) and Israel (36 points).

Trump Ratings Remain Low Around Globe, While Views of U.S. Stay Mostly Favorable 1. Little trust in Trump’s handling of international affairs 2. Little support for Trump’s international policies
3. U.S. image generally favorable around the world, but mixed in some countries
Positive assessments of the U.S. rose in some countries from 2018 to 2019, particularly among right-leaning peopleIn many countries, younger people have a more favorable view of the U.S.In many countries, those on the political right view the U.S. more favorably than those on the left
Appendix: Classifying European political parties Acknowledgments Methodology