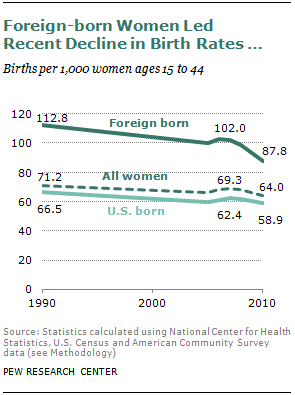 The U.S. birth rate dipped in 2011 to the lowest ever recorded, led by a plunge in births to immigrant women since the onset of the Great Recession. 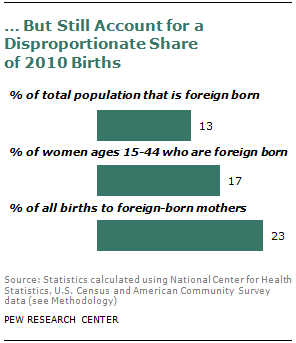 Final 2011 data are not available, but according to preliminary data from the National Center for Health Statistics, the overall birth rate in 2011 was 63.2 per 1,000 women of childbearing age. That rate is the lowest since at least 1920, the earliest year for which there are reliable numbers.2 The overall U.S. birth rate peaked most recently in the Baby Boom years, reaching 122.7 in 1957, nearly double today’s rate. The birth rate sagged through the mid-1970s but stabilized at 65-70 births per 1,000 women for most years after that before falling again after 2007, the beginning of the Great Recession. 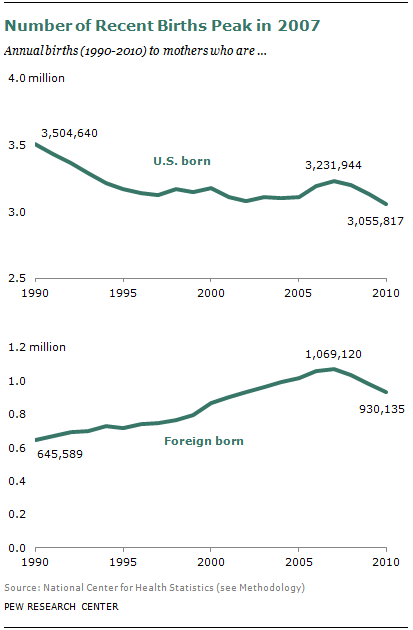 In addition to the birth rate decline, the number of U.S. births, which had been rising since 2002, fell abruptly after 2007—a decrease also led by immigrant women. From 2007 to 2010, the overall number of births declined 7%, pulled down by a 13% drop in births to immigrants and a relatively modest 5% decline in births to U.S.-born women. 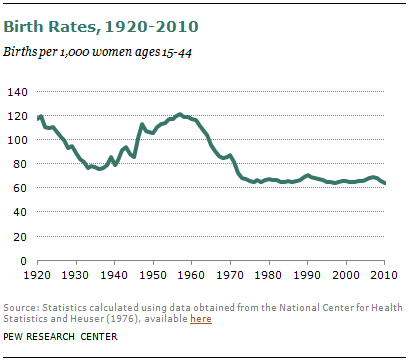 This report does not address the reasons that women had fewer births after 2007, but a previous Pew Research analysis4 concluded that the recent fertility decline is closely linked to economic distress. States with the largest economic declines from 2007 to 2008, as shown by six major indicators, were most likely to experience relatively large fertility declines from 2008 to 2009, the analysis found.

Both foreign- and U.S.-born Hispanic women had larger birth rate declines from 2007 to 2010 than did other groups. Hispanics also had larger percentage declines in household wealth than white, black or Asian households from 2005 to 2009.5 Poverty and unemployment also grew more sharply for Latinos than for non-Latinos after the Great Recession began, and most Hispanics say that the economic downturn was harder on them than on other groups.6

Looking back a century, data about very young children provide evidence about earlier trends.7 The share of U.S.-born children younger than age 2 with foreign-born mothers was about as high during the wave of immigration in the early 1900s (21%) as it is now. By 1960, after four decades of restrictions on immigration, that share had plummeted to a low of only 4%. It inched up to 6% by 1970 before rising rapidly as immigration levels increased due mainly to federal legislation passed in 1965. 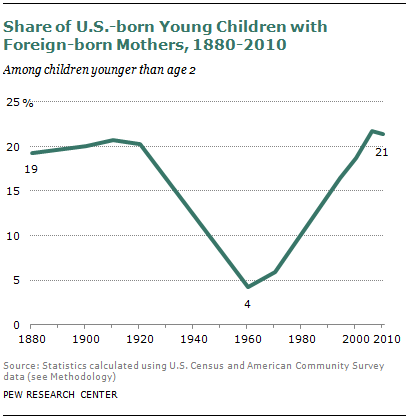 Among this report’s other major findings:

This report uses data for 1990 to 2010 from the National Center for Health Statistics and the Census Bureau to analyze and compare fertility patterns of foreign-born and U.S.-born women. The report consists of an overview and section on overall trends; births by the race, ethnicity and national origin of mothers; births by age of mothers; and births by marital status of mothers. Appendix A provides details on methodology and data analysis. Appendix B includes additional tables.

All references to whites, blacks and Asians are to the non-Hispanic components of those populations. Asians also include Pacific Islanders.

“U.S. born” and “native born” refer to people born in the 50 states or District of Columbia. “Foreign born” and “immigrant” are used interchangeably. In keeping with the practice of the National Center for Health Statistics, women born in Puerto Rico or other U.S. territories are included with the foreign born. See Methodology for more details.

Unless otherwise specified, “teens” refers to those ages 10 to 19.

In references to marital status, “married” includes those who are separated.

Next: Overall Trends
← Prev Page
You are reading page1Page2Page3Page4Page5Page6Page7
Next Page →