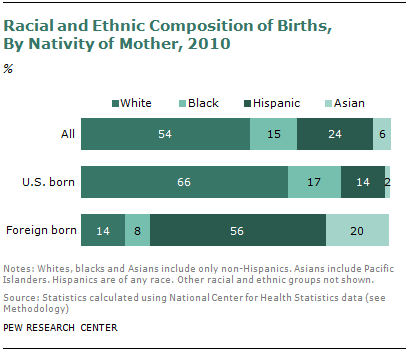 Among mothers of newborns overall in 2010, slightly more than half (54%) were white, 15% were black, 24% were Hispanic and 6% were Asian. But there are marked differences in the racial and ethnic characteristics of births to U.S.-born and immigrant mothers, which are a byproduct of both population makeup and birth rates. 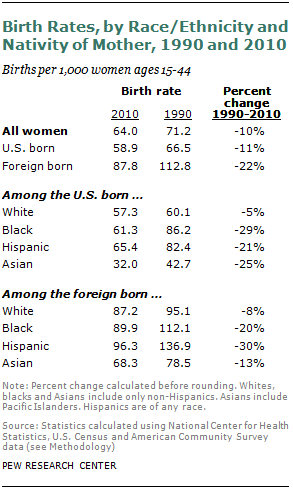 Generally, the foreign-born population has grown more rapidly, includes more women in their childbearing years and has higher birth rates than the U.S.-born population. But these metrics vary by race and ethnic group.

Both the foreign-born and U.S.-born population of whites have lower shares of women in their childbearing years than do the black, Hispanic and Asian populations.

Among all racial and ethnic groups, Hispanics have the highest birth rates—80 births per 1,000 women of childbearing age, compared with 64 for blacks, 59 for whites and 56 for Asians. The high Hispanic rate is explained in part by the high share of Hispanic women who are foreign born.

The same general pattern is true for U.S.-born women. Birth rates were markedly higher in 1990 for black and Hispanic women than for white women but now have converged because while the white rate decreased slightly since 1990, rates for the other two groups declined sharply.

The decline in births to foreign-born Latino mothers was so sharp that births to Hispanic mothers shrank as a share of all foreign-born births, to 56% in 2010 from 61% in 2007.

For U.S.-born women, births declined 7% from 2007 to 2010 for whites and blacks but rose for Asians (8%) while remaining relatively unchanged for Hispanics (up 1%). 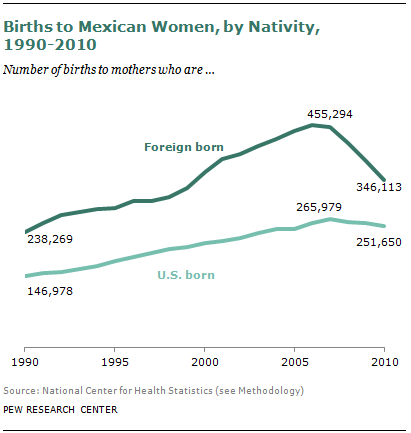 The number of foreign-born Mexican women of childbearing age did dip slightly after 2007, although this decline was less important a factor than the drop in birth rates. The small decrease in this population occurred during a period of reversal in historic immigration patterns from Mexico. According to a recent Pew Hispanic Center report, net immigration from Mexico—the sum of arrivals and departures—is now zero, and perhaps negative, after years of rapid increases.

Next: Age
← Prev Page
Page1Page2You are reading page3Page4Page5Page6Page7
Next Page →