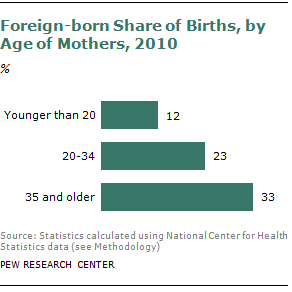 Three-quarters (76%) of all births in the U.S. in 2010 were to women ages 20 to 34. The share was similar for both U.S.-born women and foreign-born women, and for the major racial and ethnic groups. However, there are some other notable differences by nativity among younger and older age groups.

This pattern plays out in the share of births by age to women born in the U.S. and born abroad. Among U.S.-born women, roughly equal shares of births are to mothers in their teens (11% in 2010) and those ages 35 and older (13%). Among immigrants, four times as many births are to older mothers (21% of all 2010 births) as to mothers in their teens (5%). 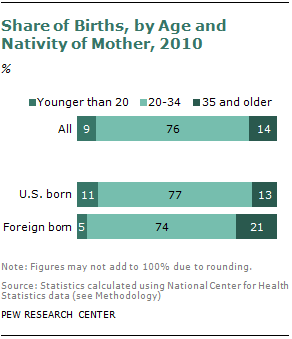 Looking at overall births by nativity, in 2010, immigrant mothers accounted for 23% of all births but only 12% of births to mothers younger than 20 and fully 33% of births to women ages 35 and older. 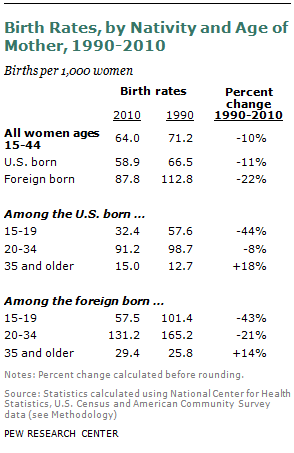 Birth rates also play a role in explaining nativity differences in births to older mothers. Overall, as well as among white, black and Hispanic mothers, birth rates at ages 35 and older are higher for immigrants than for U.S.-born women. Rates are fairly similar regardless of nativity for Asian women ages 35 and older.

The share of births to teen mothers has dropped over the past two decades for all women, declining to 9% in 2010 from 13% in 1990, mainly because of a dramatic decline in birth rates for this group. The share also declined for both native-born and immigrant women and for all major racial and ethnic groups, both foreign born and U.S. born.

All groups also experienced a decline in birth rates to women ages 15-19 over the 20-year period.

During the same period, the share of births to women ages 35 and older has grown overall, from 9% in 1990 to 14% in 2010, because of an increase in birth rates and an increase in the population of women in this age group.

The share of births to older women grew for both native-born and immigrant women, and for all major racial and ethnic groups, both foreign born and U.S. born. The increase in share has been particularly sharp for foreign-born women—10 percentage points or more for each of the major racial groups.

Birth rates for women ages 35 and older rose over the 20-year period among all groups except foreign-born Hispanic women and U.S.-born black women.