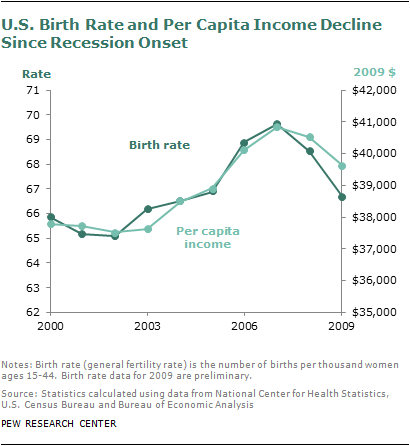 A sharp decline in fertility rates in the United States that started in 2008 is closely linked to the souring of the economy that began about the same time, according to a new analysis of multiple economic and demographic data sources by the Pew Research Center.

For example, North Dakota, which experienced one of the nation’s lowest unemployment rates (3.1%) in 2008, was the only state to show even a slight increase (0.7%) in births from 2008 to 2009. All other states and the District of Columbia experienced either no change, or declines, in births during that period.

These correlations are based on fertility trends calculated using data from the National Center for Health Statistics and the U.S. Census Bureau and economic trend data from six familiar indicators (per capita income, per capita gross domestic product, employment rate, unemployment rate, initial unemployment claims, and foreclosure rates) tracked by the Bureau of Economic Analysis, the Bureau of Labor Statistics and RealtyTrac.2 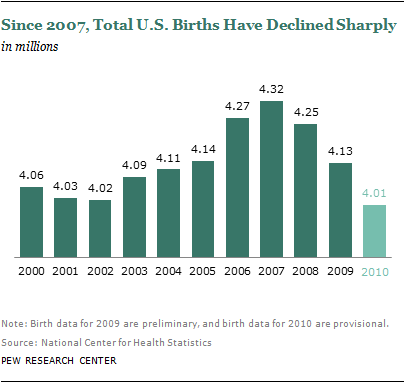 The Pew Research Center analysis also finds evidence of an association between economic hard times and fertility declines by race and ethnicity. Hispanics, whose employment levels and household wealth were particularly hard hit by the Great Recession, have experienced the largest fertility declines of the nation’s three major racial and ethnic groups. Conversely, whites have experienced smaller economic hardships, and smaller declines in fertility. From 2008 to 2009, birth rates dropped by 5.9% among Hispanic women, while birth rates dropped 2.4% among black women and 1.6% among white women.

Fertility and the Recession 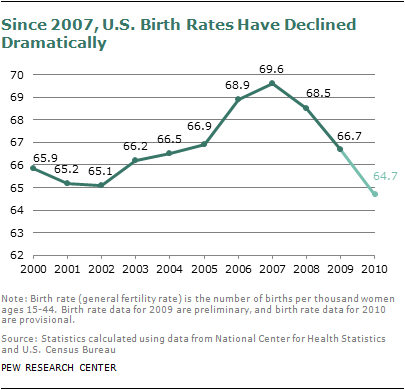 This research capitalizes on such across-state differences to examine whether the economic downturn is associated with the sharp fertility declines that the U.S. has experienced since 2007. Six of the seven economic indicators that the Pew Research Center analyzed were strongly linked to subsequent changes in fertility at the state level. In particular, changes in per capita personal income, per capita GDP, employment rate, unemployment rate and initial unemployment claims from 2007 to 2008 were closely related to changes in fertility rates occurring from 2008 to 2009, as were 2008 state-level foreclosure rates.3 The change from 2007 to 2008 in the Home Price Index, an indicator of housing value, was not linked to subsequent fertility.

In 48 of 51 states (a number that includes the District of Columbia), fertility declines occurred within one to two years of the start of economic declines (as indicated by the percent change in personal income per capita, and the percent change in the employment rate). This does not conclusively prove that the economic changes led to fertility changes. However, the timing is consistent with the time it might take people to act upon fertility decisions. 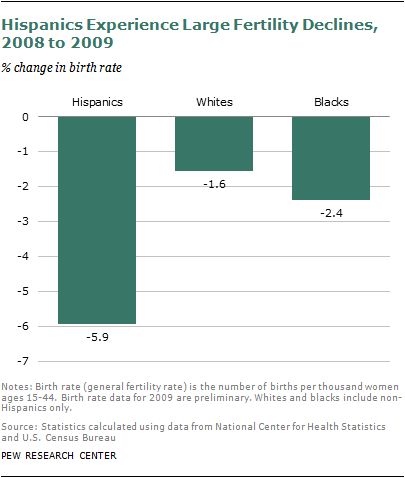 It is difficult to obtain reliable annual indicators of fertility and the economy at the state level by separate racial and ethnic groups. But an examination of national-level data shows that Hispanics, who have been hit the hardest in terms of employment and wealth, have also experienced the largest fertility declines since the onset of the recession. Conversely, the smaller birth rate declines among whites could reflect the fact that they were less hard hit by the recession than were Hispanics or blacks.

From 2008 to 2009, the birth rate among Hispanics dropped almost 6%. In comparison, blacks experienced a 2.4% decline, and whites experienced a 1.6% decline. While Hispanics continue to have birth rates that are much higher than their non-Hispanic counterparts, the 2009 Hispanic birth rate of 93.3 births per 1000 women of childbearing age is the lowest rate since 1999. 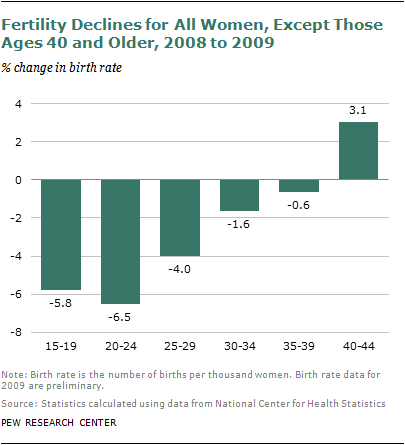 It’s typically quite difficult to determine if economic changes are causing fertility changes, since other social and cultural factors may also be at play, such as changes in women’s labor force participation, contraceptive technology, and public policy (Pison 2009). However, there is historical evidence of a link between economic cycles and fertility in the U.S.—Carl Haub of the Population Reference Bureau points to both the Great Depression and the oil bust of the early 1970s as examples. Research examining fertility across multiple industrialized countries has also shown a link between economic declines and fertility declines (Sobotka et al. 2011; Goldstein et al. 2009).

Experts suggest that much of the fertility decline that occurs during an economic decline is postponement of childbearing and does not represent a decision to have fewer children (Sobotka et al. 2011; Goldstein et al. 2009). In other words, people put off having children during the economic downturn, and then catch up on fertility once economic conditions improve.

It’s too early to know if fertility will bounce back as the U.S. economy recovers,5 but preliminary evidence suggests that the fertility decline may indeed be driven by postponement. Survey findings from the Pew Research Center and vital statistics data have shown that the recession is more strongly associated with fertility declines among younger women, who presumably have the luxury of postponing fertility until better economic times prevail. Conversely, older women are less likely to say that they have postponed fertility due to economic declines. They are the only age group that has shown consistent, if not rising, fertility in recent years.

Next: Appendix 1
← Prev Page
You are reading page1Page2Page3
Next Page →