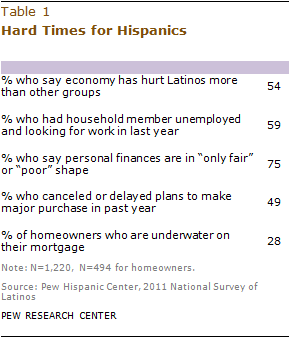 A majority of Latinos (54%) believe that the economic downturn that began in 2007 has been harder on them than on other groups in America.

The findings are drawn from a new telephone survey of a nationally representative sample of 1,220 Hispanic adults conducted by the Pew Hispanic Center, a project of the Pew Research Center. For a full description of the survey methodology, see Appendix C.

Latinos, who make up 16% of the population of the United States, have long trailed other Americans on most measures of economic well-being, but analyses of recent government trend data indicate that the gaps have widened since 2005, a period that encompasses the housing market crash and the Great Recession. For example: 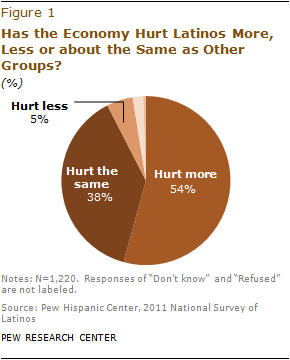 In their responses to a more detailed battery of questions, Latinos are more downbeat than the general public about various aspects of their economic lives. For example: 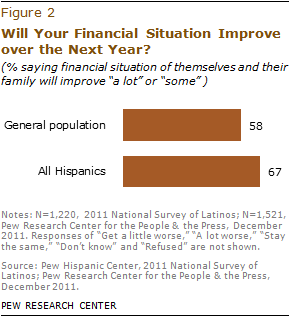 Despite these downbeat assessments about their current economic circumstances, Latinos are more upbeat than others about the prospect for better days ahead—both for themselves and their families in the short term and for their children over the long haul. 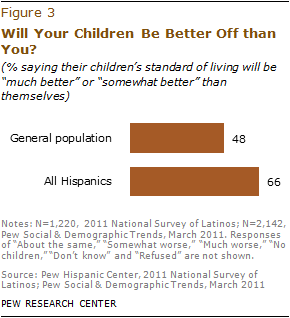 The Latino population, at 50 million strong, is the largest minority group in the country. Some 52% of Latino adults are immigrants, and 48% were born in the United States. As is often the case, the new survey finds significant differences in the attitudes and experiences reported by these two groups.

Immigrants, however, are more likely than the native born to say their children will eventually have a higher standard of living than theirs is now—72% versus 59%.

The 2011 National Survey of Latinos (NSL) focuses on Latinos’ views of the economy, their own personal finances and experiences with the housing market. The survey was conducted from November 9 through December 7, 2011, in all 50 states and the District of Columbia among a randomly selected, nationally representative sample of 1,220 Latino adults. The survey was conducted in both English and Spanish on cellular as well as landline telephones. The margin of error for the full sample is plus or minus 3.6 percentage points.

Next: II. Latinos in a Tough Economy
← Prev Page
You are reading page1Page2Page3Page4Page5Page6Page7
Next Page →

Hispanics and the Economic Downturn: Housing Woes and Remittance Cuts
Sharp Decline in Income for Non-Citizen Immigrant Households, 2006-2007
More Latinos Have Serious Concerns About Their Place in America Under Trump
Latinos’ Incomes Higher Than Before Great Recession, but U.S.-Born Latinos Yet to Recover
Hispanic Identity Fades Across Generations as Immigrant Connections Fall Away
Defining generations: Where Millennials end and Generation Z begins
Quiz: Are you a Core Conservative? A Solid Liberal? Or somewhere in between?
Most Americans Support Tough Stance Toward China on Human Rights, Economic Issues
Key facts about Asian Americans, a diverse and growing population
Views on Race in America