The 2016 campaign has attracted a high level of interest from voters. Several key measures of voter attention and engagement are currently as high – or higher – than at any point over the last two decades. 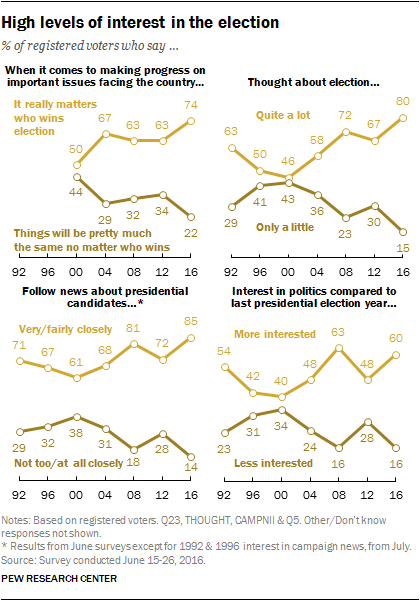 Today, roughly three-in-four registered voters (74%) say that it “really matters who wins” the presidential election, substantially higher than the share who said this at similar points in any of the prior four presidential contests: In 2008 and 2012, smaller majorities (63% each) said that the outcome really mattered, while 67% did so in 2004.

And six-in-ten (60%) now report that they are more interested in politics than they were four years ago. This is on par with the share who said this in 2008, and higher than in any other election in the last few decades.

On all four measures, both Republican and Democratic voters are more invested in this year’s election than they were in 2012. 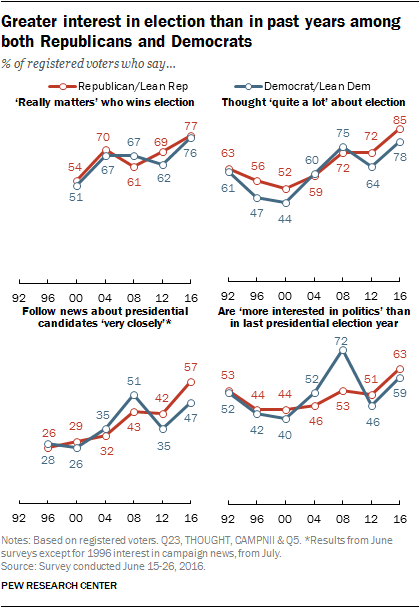 Republicans are also more likely than Democrats to say they are closely following news about the presidential candidates (57% vs. 47%), though those in both parties are paying greater attention to the campaign than in 2012 or in most recent elections (in 2008, 51% of Democrats followed the campaign very closely, roughly the same level as today).

Across all age groups, voters are more focused on the presidential election this year than in 2012. Today, about three-quarters of 18-29 year-olds (74%) have given quite a lot of thought to the election, up 15 percentage points from June 2012. And 81% of voters 65 and older have thought quite a lot about the election, up 11-percentage points since 2012. 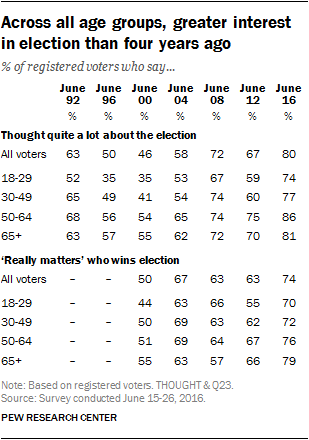 As in most recent elections – with the exception of 2008 – older voters are currently more attentive to the election than younger voters. Among those under 50, 76% are giving the campaign quite a lot of thought, while 84% of those 50 and older say so.

Similarly, though voters of all ages are more likely to say the outcome of the 2016 election really matters to the country than said this four years ago, older voters remain more likely than younger voters to do so. Seven-in-ten (70%) voters under 30 think it really matters who wins the presidential election, an increase from 55% in 2012. About eight-in-ten (79%) of those 65 and older say it makes a difference who wins the election, up from 66% four years ago.

White voters are more likely than black voters to say they have given a lot of thought to this year’s election, a change from the past three presidential election cycles when there were no significant differences between blacks and whites on this measure. This year, 84% of white voters report giving quite a lot of thought to the election. About seven-in-ten black (69%) and Hispanic (68%) voters, say the same. 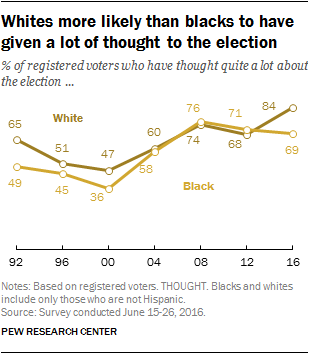 However, there is no difference between white (75%) and black (74%) voters in the share who say that it really matters who wins the election; 67% of Hispanic voters say the outcome of the election really matters.

Campaign seen as interesting, not substantive 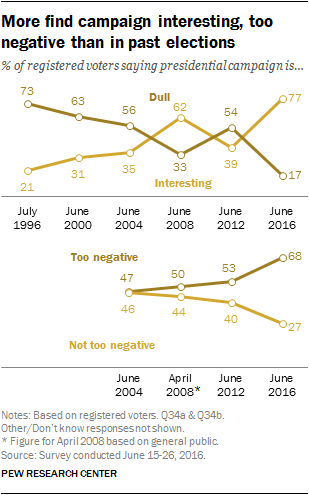 About three quarters of voters (77%) call the 2016 race “interesting,” a higher proportion than any election in the past two decades. Only 17% consider this year’s campaign “dull.”

But despite this interest, many voters also consider this year’s race “too negative.” About two-thirds (68%) say the tone of the campaign is too negative, while just 27% think it is not too negative. 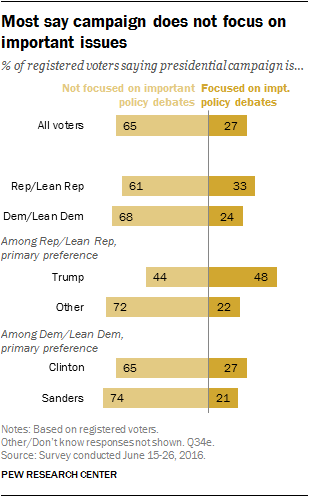 Last December a slightly smaller majority (57%) said the campaign was not substantively focused, while about a third (35%) said it was. 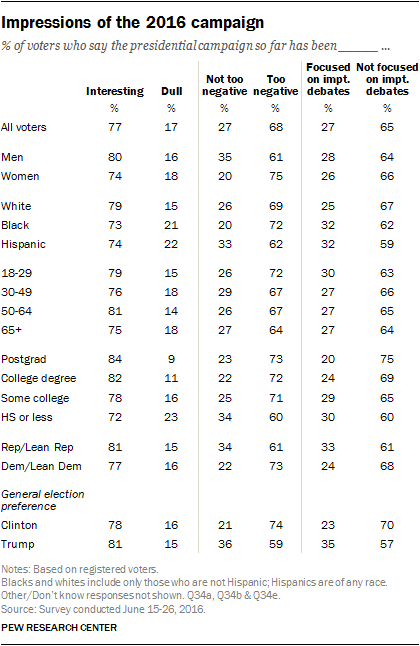 Among Democrats and Democratic leaners, just 21% of voters who supported Bernie Sanders in the primary and 27% of those who backed Clinton say the campaign is focused on important policy debates.

Roughly three-quarters of Democratic voters (73%) say the campaign has been too negative in tone; a smaller majority of Republican voters (61%) say the same.

Other demographic differences on these measures are relatively modest; however, women (75%) are more likely than men (61%) to say the campaign has been too negative.