On a series of personal traits, voters say Clinton, rather than Trump, is better described by the phrases “personally qualified to be president” and “would use good judgment in a crisis,” but neither candidate holds an edge when it comes to the dimension of “honest and truthful.” 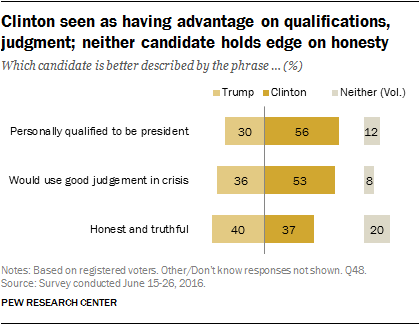 Overall, 56% of voters say Clinton is better described by the phrase personally qualified to be president, compared with just 30% who say this better describes Trump. Clinton also enjoys a wide edge over Trump on which candidate would use good judgement in a crisis (53%-36%).

As with views on the candidates’ ability to handle issues, there are differences in perceptions of candidate traits within both parties by primary preferences. 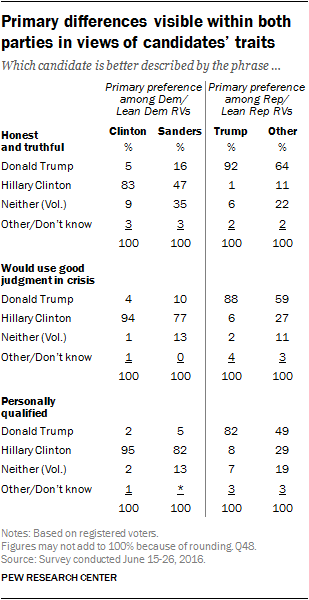 Republicans who did not support Trump in the GOP primary are also less likely than those who did to view him as the candidate better described as honest and truthful (64% vs. 92%) and able to use good judgment in a crisis (59% vs. 88%).

Among Democrats and Democratic leaners, 83% of those who supported Clinton in the primaries say she, rather than Trump, is better described as honest and truthful; just 47% of Democrats who supported Sanders say the same. Democratic voters who supported Sanders are also less likely than Clinton primary backers to say she is the general election candidate who is personally qualified to be president and would use good judgement in a crisis; nonetheless three-quarters or more say Clinton is better described by each of these phrases than Trump. 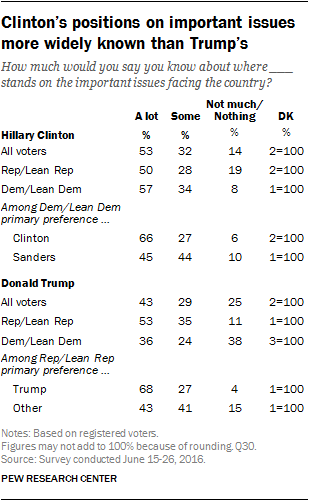 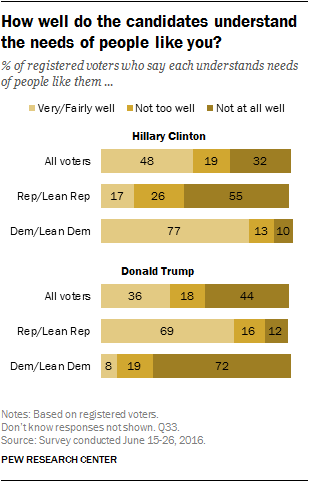 Roughly three-quarters of Democratic voters (77%) say Clinton understands their needs well, compared with 69% of GOP voters who say Trump understands the needs of people like them well.

Most Republicans say those in the party generally agree with Trump

In contrast, by more than three-to-one (72% vs. 20%), most voters say average Democrats generally agree with Clinton on the issues.

About three-quarters of those who supported Trump for the nomination (76%) say Republicans as a whole are generally in agreement with Trump. GOP voters who backed candidates other than Trump in the primaries are more divided on this question. Nevertheless, more say average Republicans agree, rather than disagree, with Trump (53% vs. 38%).

Across the political spectrum, large majorities say Democrats are generally in agreement with Clinton. Fully 81% of Democratic and Democratic-leaning voters say this, along with 66% of GOP voters. And though Sanders’ primary backers are somewhat more likely than Clinton’s primary supporters to think average Democrats agree with Clinton on most issues, a clear majority of those in both groups (74% vs. 87%, respectively) say the Democratic rank-and-file generally agrees with Clinton on most issues.

Would Trump or Clinton change the way things work in Washington?

Voters are much more likely to say that Donald Trump would change the way things work in Washington than Hillary Clinton, but many think the change Trump would bring to Washington would be for the worse.

Overall, more voters think that Trump would change the way things work in Washington for the worse (44%) than for the better (33%); just 21% say they don’t think he would change things much either way.

Views of the impact of Hillary Clinton’s gender 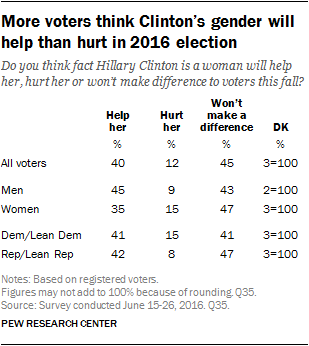 At the July Democratic national convention, Hillary Clinton is set to become the first woman nominated for president by one of the two major political parties. At this stage of the campaign, 45% of voters think that the fact that she is a woman won’t make a difference to voters this fall; those who say it will be a factor are much more likely to think it will help her (40%) than hurt her (12%).

There are modest differences in these perceptions between men and women voters. Overall, 47% of women and 43% of men say Clinton’s gender won’t make a difference to voters this fall; men are somewhat more likely than women (45% vs. 35%) to say Clinton’s gender will help her. And though few men or women think her gender will hurt her, this view is more prevalent among women than men (15% vs. 9%).

Next: 6. Hispanic voters and the 2016 election
← Prev Page
Page1Page2Page3Page4Page5You are reading page6Page7Page8Page9
Next Page →