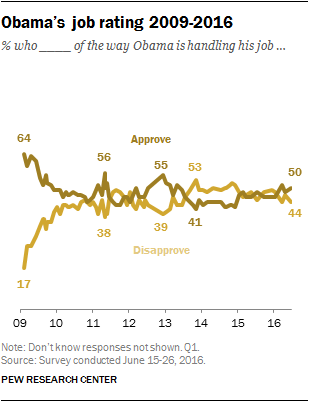 Among the public overall, 50% approve of the way Barack Obama is handling his job as president, while 44% disapprove. Obama’s job approval is little changed from April (48%) and March (51%), when his job rating reached positive territory for the first time in nearly three years.

Independents are split on Obama approval: 46% approve, while 46% disapprove. However, three-quarters of those who lean toward a party express views in line with partisans: 75% of Democratic leaners approve, and 75% of Republican leaners disapprove. (For more on views of Barack and Michelle Obama, see our recent report on “Partisanship and Political Animosity in 2016.”) 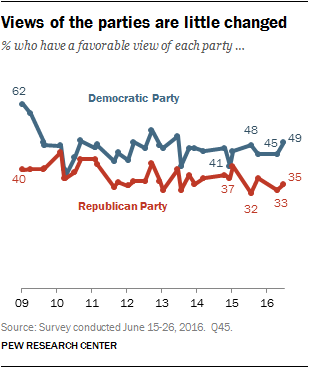 As was the case in April, Republicans have less favorable opinions of their own party than Democrats have of theirs. Currently, 69% of Republicans view the GOP favorably; by contrast, 85% of Democrats view the Democratic Party favorably. 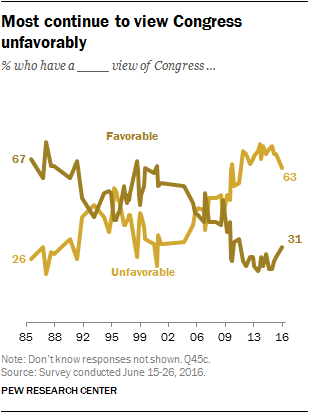 The Democratic Party has held a significant advantage in favorability over the Republican Party over the last six years. The gap narrowed in late 2014, shortly after Republicans won control of both the House and Senate, but a clear Democratic favorability advantage reemerged by the summer of 2015.
Currently, 31% of the public views Congress favorably, while about twice as many (63%) have an unfavorable opinion. While views of Congress have been quite negative for several years, the current favorable rating is a bit higher than last September (27%).

Majorities of independents (66%), Republicans (63%) and Democrats (62%) have unfavorable opinions of Congress.

Views of the national economy

The public continues to have mixed ratings of the nation’s economy. Currently, 44% say conditions are only fair while a roughly equal share views them as excellent or good (27%) or poor (28%).

These views have changed little over the last year, but there has been long-term improvement in economic attitudes. In June 2012, at about the same point in the previous presidential campaign, just 10% expressed positive views of the nation’s economy, while 42% described economic conditions as poor.

Looking ahead, a majority of Americans (54%) say conditions next year will be about the same as they are now. About three-in-ten (29%) say things will improve over the course of the next year and 13% believe they will get worse. 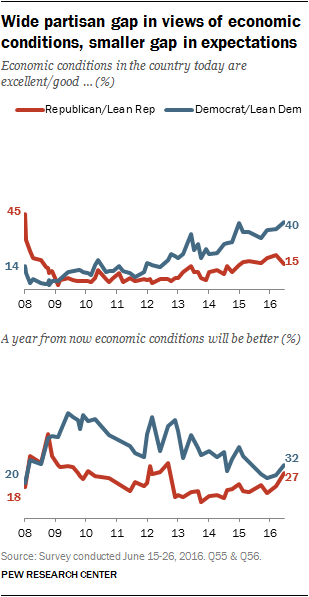 Partisan differences are more muted on expectations about where the economy is heading. Similar shares of Democrats and Democratic leaners (32%) and Republicans and Republican leaners (27%) expect things to improve over the next year. Few expect conditions to get worse and pluralities of both (51% of Republicans, 58% of Democrats) say the economy will be little changed. 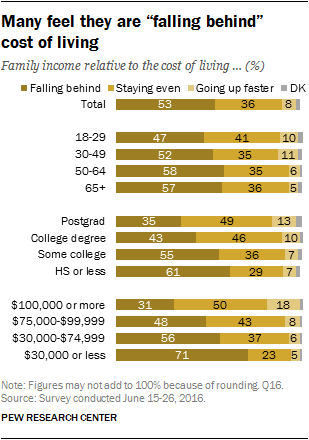 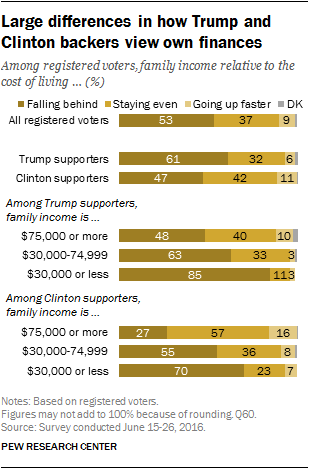 Among registered voters, there are wide differences in views of the economy among supporters of Trump and Clinton. A majority of Trump supporters (61%) say their incomes are not keeping pace with the cost of living compared with 47% of Clinton supporters.

Views of the job situation 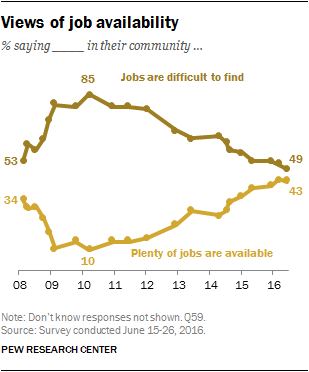 As with views of the economy, the public’s perceptions of job availability have changed little in recent months, but are much more positive than they were a few years ago. Nearly half of the public (49%) says jobs are difficult to find in their community, while slightly fewer (43%) say there are plenty of jobs available. 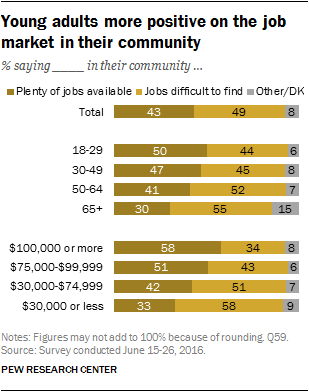